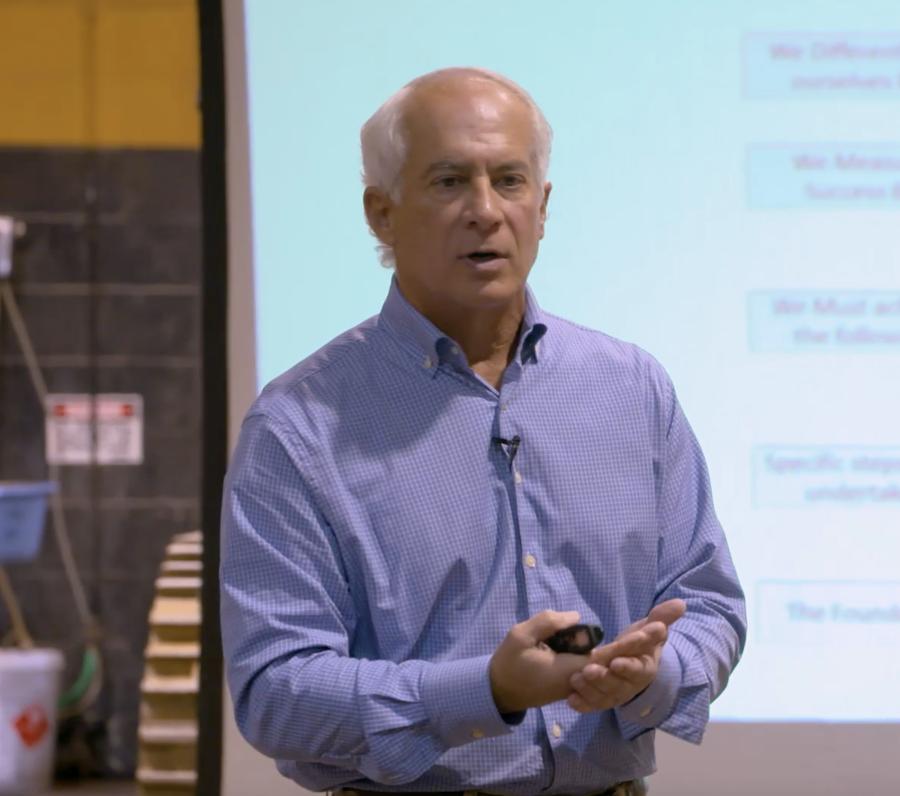 After formally coming aboard in 1978, Gregory Poole III worked through a succession of positions for the next 18 years, culminating in 1996 with his rise to president and chief operating officer.

Seventy years of success didn't just happen for Gregory Poole Equipment Company. The eastern North Carolina Caterpillar dealership's success has come from being well-grounded as an organization from its founding in 1951 and from being able to adapt to evolving — sometimes abruptly changing — circumstances.

Company President Gregory Poole III characterized the mostly ups and occasional downs experienced by the dealership during his watch as "a fun and rewarding journey." That's an upbeat lookback at a contemporary period of the company's history that included deep and persistent troughs in the national economy and the current disruption caused by the ongoing pandemic.

Fun it may have been to have survived and thrived in the face of such difficulty, but no one believes the resulting success was accomplished without work.

Caterpillar Tractor Company decided in 1950 to split in half its North Carolina sales territory to better serve customers spread across the 560-mi.-long state. To that end, it initiated talks with a road contractor in the state named Gregory Poole. Prior to World War II, Poole had begun a road contracting business, leaving it temporarily during the war to mine coal in West Virginia after road contract funds were diverted to wartime priorities such as coal production.

Poole employed Cat machinery in his road work, so when Caterpillar executives decided to reorganize its North Carolina dealer network, Poole was offered the territory from Burlington east to the Atlantic Coast. "My grandfather jumped at the opportunity," the current company president said.

Gregory Poole became a Cat dealer the next year, partnering with his uncle, William Lewis Gregory. The Gregory-Poole Equipment Company opened its doors on Hillsborough Street in Raleigh in April 1951 in a building formerly housing an auto dealership. A branch office was opened at the same time in an old Army Quonset hut in New Bern. 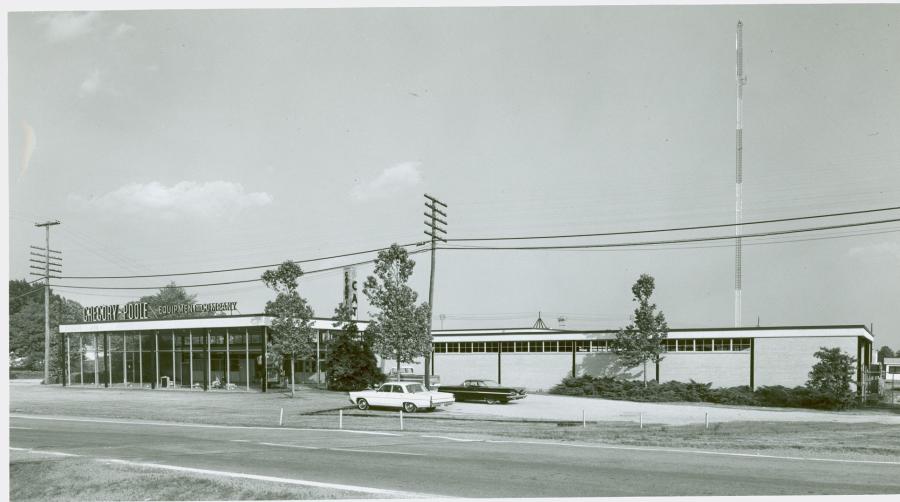 Consequently, in three short years, Gregory-Poole Equipment experienced enough business success to build a new corporate headquarters on Beryl Road in Raleigh. It said something about the confidence of company leaders at that moment that they hired an acclaimed modernist architect, George Matsumoto, to design the headquarters facility. Matsumoto was a founding member of the School of Design at N.C. State University — located further east on Hillsborough Street — and his executed plan for the headquarters facility won several architectural awards.

Five years after the company's launch, Poole and his family bought out his uncle. The Gregory Poole Equipment Company — minus the hyphen — began its multi-generational run.

The second Poole generation took over management of the company in 1965 when J. Gregory Poole Jr. succeeded his father as president. He oversaw growth of the dealership for the next 30 years. Three years after he began to preside, an Industrial Division was formed in Raleigh to sell and service materials-handling equipment — forklifts and other warehouse lifting machinery. The division soon opened a branch in Wilmington, N.C.

In ensuing years, North Carolina dealership branches were opened in Washington and Fayetteville. In 1986, the Industrial Division of the company leapfrogged the state line and established two locations in South Carolina. A Caterpillar Power Systems Division opened in Raleigh in 1990 to serve power generation, marine and truck applications.

Clearly, this period of the company history was not static, with expansion to six locations, addition of several new lines of equipment, rolling out of ever more capable Caterpillar equipment, and growth in the company workforce from 40 employees to 400.

The company also saw the arrival in 1978 of a third Poole generation, Gregory Poole III. "I actually started long before then, but that was my hire date," he said. "I started sweeping floors in the parts department when I was eight years old and worked in the shop from ages 12 to 16. I've always wanted to work here."

After formally coming aboard, Poole worked through a succession of positions for the next 18 years, culminating in 1996 with his rise to president and chief operating officer. Three years later, Poole purchased the company from his father.

Within 18 months of that transition in leadership, the new chief executive faced his first major challenge, which came partly as a consequence of a national crisis. The economy suffered a severe blow when terrorists attacked the United States in September of 2001, striking targets less than 300 miles north of Raleigh in Washington, D.C., and farther north in New York City.

"We had basically flatlined at that point. We had to make a major shift in what we were doing," Poole said. Internal meetings were called to attempt to resolve the dilemma. "We met weekly and we each had areas of responsibility. In the end, we unfortunately had to cut some people from the payroll to right-size the organization for the times, and for where we were going and where the economy was going." 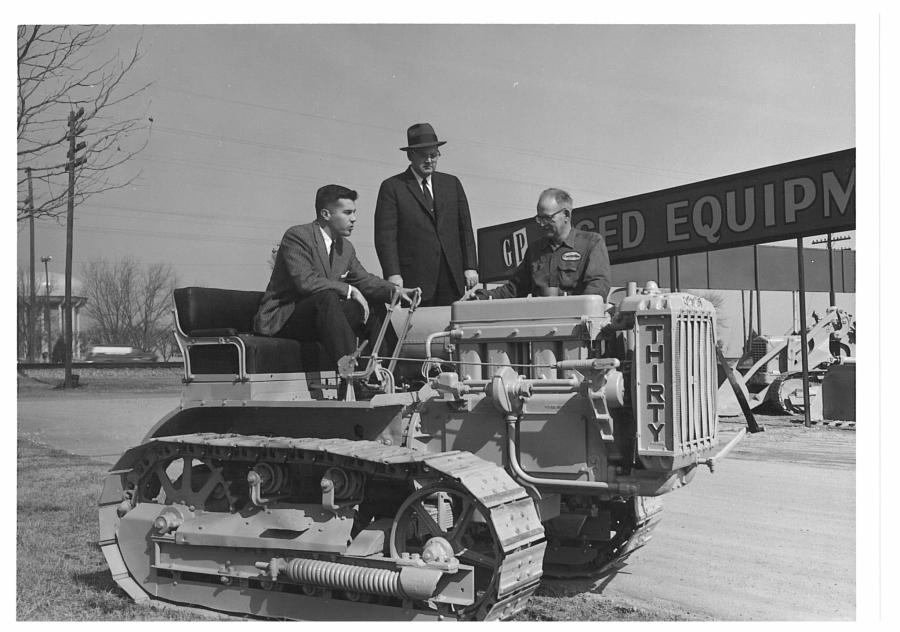 It was a memorable and successful handling of a first challenge. "I'll never forget pulling that team together and facilitating, rather than dictating, decisions. Outlining the facts and pulling things together until we had a consensus about where we knew we needed to go."

Poole said that moment was indicative of his leadership style, which he characterized as "facilitating an environment and leading people to a right conclusion rather than telling them what the right conclusion should be."

He has turned to that method of management in responding to subsequent challenges, such as dealing with the deep recession of 2008-10 and the ongoing pandemic's disruption of normal business activity.

In the two decades that Gregory Poole III has led the dealership, the pace of growth and change has quickened. The Lift Systems Division has been expanded across North and South Carolina and Virginia, and in 2014, the division incorporated as an affiliate the formerly Ohio-based Advanced Handling Systems, which serves the materials handling industry.

The industry itself also has changed. For one thing, rental of equipment has come into its own as the cost and complexity of machinery has risen and federal investment in infrastructure has become more problematic. When contractors today need an extra piece of equipment or aren't sure about the duration of a job, they often rent rather than buy.

"Rental equipment fluctuates between 8 percent and 10 percent of our business," Poole said. "It's a growing segment and I don't see that changing."

The development of compact equipment, such as compact track loaders and mini-excavators, was another notable change in the industry. It severely tested old-line manufacturers of heavy equipment like Caterpillar. Poole said reinventing the Cat lineup to incorporate compact machines was a challenge for both Cat and its dealers. 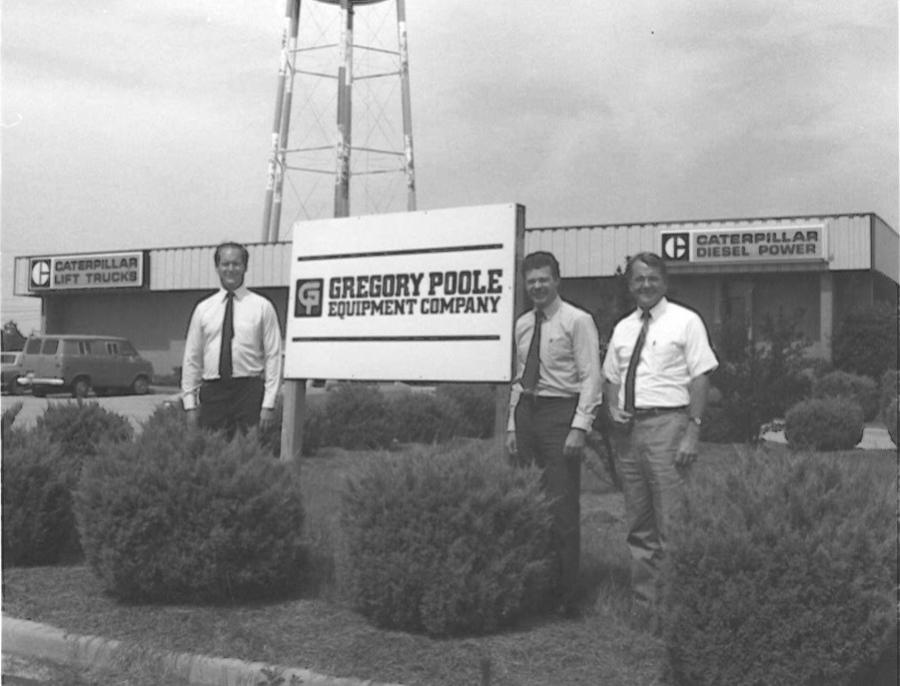 "That was a pretty tough segment for Cat. For the first time in the history of Caterpillar, it was going up against a trademark brand, Bobcat. Bobcat was synonymous with Coca-Cola and Kleenex. Everybody calls a cola a Coke and a piece of tissue a Kleenex. Cat was up against a brand that huge."

At this point, Poole believes Cat is "holding our own and making great headway in that segment. I think the reason we are successful is because of the reputation of Cat and of each of the dealers. Cat has a wonderful reputation for building quality equipment and Gregory Poole has an amazing record of delivering service and keeping customers up and running."

Yet there was a necessary "pivot," Poole said. "Unlike the expectations of customers of D10 and D9 dozers, the compact equipment customers were people who wanted an oil change on a machine they would drop off at six in the evening and expected to pick up at six or 6:30 in the morning. We had to adapt to that and did so by putting in a second shift to handle that expectation."

Whether it is an 80-ton bulldozer or a three-ton skid steer loader, service expectations always are high. Gregory Poole Equipment Company tries to meet them by employing 615 technicians company-wide and dedicating some 700 vehicles to the cause of keeping downtime to a minimum. Though not yet universally embraced by contractors in the industry, telematic monitoring of engine health has helped the cause.

From six Caterpillar locations when Gregory Poole III became president, the dealership has grown to 23 locations for Caterpillar and other lines of equipment. From 400 employees, it has swelled to nearly 1,300. Poole said such steady growth has been sustainable because, from the very beginning, company leadership has cultivated a culture of teamwork.

"My grandfather placed a large emphasis on the quality of people he hired and focused on the culture being very family-centric," he said. "Obviously, you have to enhance that when you grow from a mom-and-pop store to a company of this size. You have to enhance the culture so that people who are managing a department or a division do so as if they owned it."

To parcel out responsibility in that way, Poole believes the structure of decision-making is critical. "When all decisions are funneled to the top of a pyramid and then back down again, I think the end is in sight. There is no more growth, and your company becomes stagnant. Worse yet, you kill the creativity and ingenuity of the people working for you. 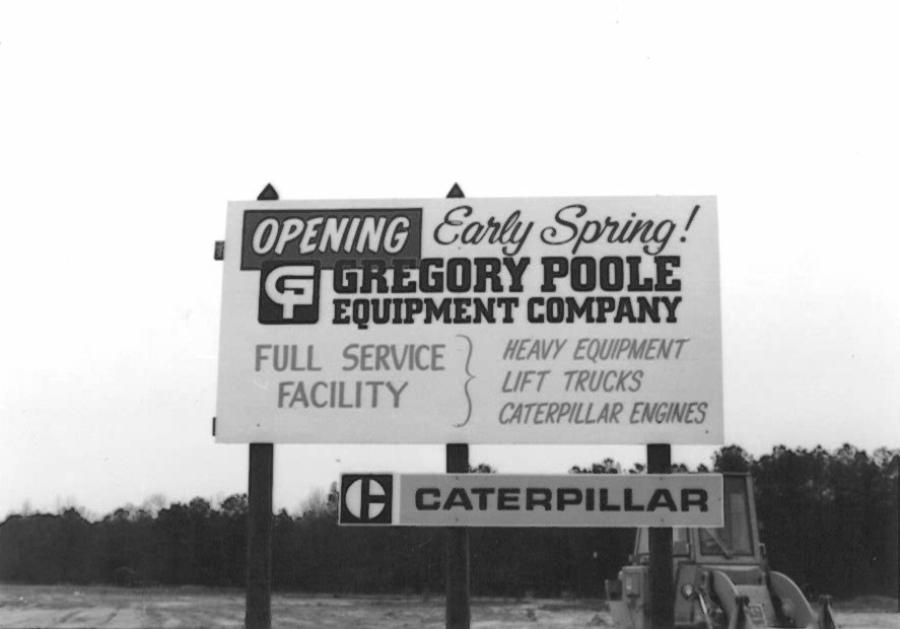 "We have had many, many discussions about how to grow the company, where to grow and why to grow. It has been fun to watch the energy level of people pick up as they decide to embrace our culture," Poole said. He added that four years ago he implemented an initiative that inculcated into the process more accountability and more strategic thinking. The reward to the company has been "huge."

"That doesn't mean we don't focus on customers, but we can't leave our employees on the sidelines. That would be catastrophic because they are the ones who make our customers happy and keep them up and running and coming back to us."

The company owner said the dealership's reliance on team effort works because people hired to work at Gregory Poole Equipment are carefully chosen in a thorough hiring process.

"We have three full-time recruiters, and we are front and center with everyone. We don't back away from vetting, no matter for what level of employment we are making a job offer. We want to make sure we have a good fit. That's the first thing. The second thing is maintaining the company's family culture and always doing what is right by your employees."

Continued Poole: "Those two things have held us in good stead for seven decades. We plan on continuing that kind of focus and carrying it forward for another 70 years."

And somewhere in those future decades — relatively soon — the next succession in family-owned company leadership is expected to occur. The process already has begun, Poole said.

"My oldest son works in the business and our plans are definitely to see this business transition to the fourth generation."