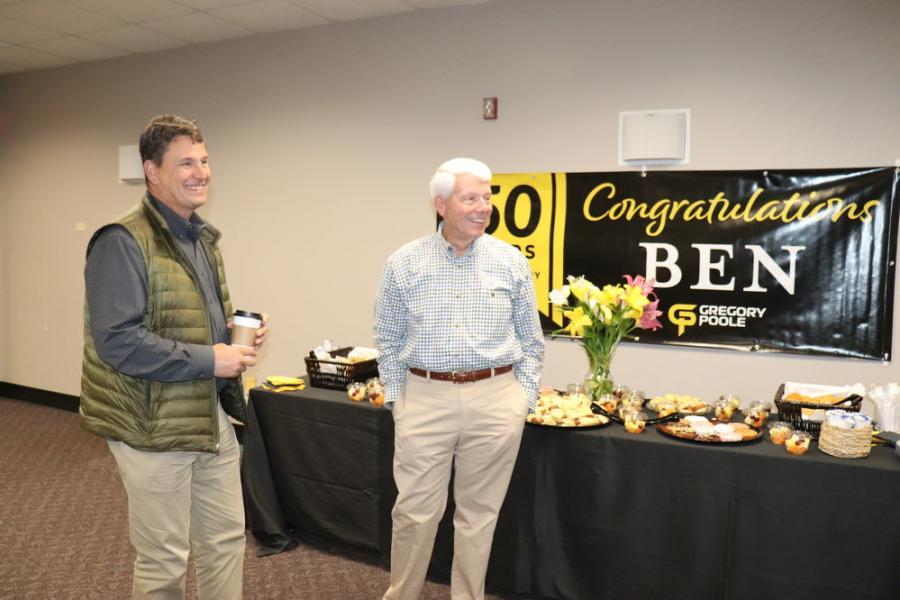 For the past 35 years of his tenure with the company, Ben Bradsher (R) served as its vice president and account manager for all the construction equipment company’s quarry accounts. Vice president and CFO Mark Massey is on the left.

Contractors, farmers and forestry experts working in the eastern half of North Carolina have long relied on Raleigh-based Gregory Poole Equipment Company to supply them with needed machines, tools and services. That has been true since the full-service construction equipment dealership was started in April 1951.

Today, Gregory Poole serves as the Caterpillar equipment dealer for 54 of the state's 100 counties. Its territory is east of a straight line that extends south from the Virginia line along the western border of Caswell County and all the way down to the North Carolina-South Carolina border.

As a family company, Gregory Poole has brought a familial spirit to the business and made the work environment a pleasant place to work.

It also has become an incubator for developing talented people. One of the best examples was Ben Bradsher, who joined the company on Oct. 2, 1971, as a young sales trainee.

Fast forward to this past March 31, the day that Bradsher finally retired from Gregory Poole Cat after 50½ years of continuous and distinguished service with the dealership.

For the past 35 years of his tenure with the company, he served as its vice president and account manager for all the construction equipment company's quarry accounts, where he worked closely with clients like Luck Stone, Vulcan Materials and Martin Marietta. In addition, he handled the accounts for several large contractors in the eastern part of the state.

In an interview two days before he retired, Bradsher said that despite loving the work he did at Gregory Poole Cat, "I feel the time is right to step away," and he did so with a plan in mind for what would come next in his life.

"Well, I want to spend more time with my grandchildren," he said. "I have three of them — ages 10, eight and five, with another on the way in July. I am also going to play some golf, do some traveling and I plan to find something to do — some business — that will keep me busy for part of my time. I am not going to work as much as I have for the past 50 years, but I want something to do to keep my mind active. I will be 75 this year, and I like challenges, so whatever I decide to do will be something to challenge me."

Bradsher grew up on a tobacco farm near Roxboro, a small town approximately 60 mi. north of Raleigh. After graduating from North Carolina State University in 1969, having majored in Agricultural Economics, he went into the U.S. Army for two years and served in Vietnam as an infantry platoon leader.

After that, he returned to Raleigh and took a job at a local bank, but three months into it, he decided banking was not for him.

That decision proved to be the turning point in his career.

"Before I had taken the job with the bank, I had also spoken to Gregory Poole, so when the banking position didn't work out, I called Gregory Poole and asked them if they were still looking to fill the position I was interested in," he said. "I was told they were, so I went through the interview process and after they hired me, I became a sales trainee the fall of 1971."

At that time, Caterpillar and Gregory Poole Equipment Co. had been partners for 20 years, and the latter had established a few branches in eastern North Carolina. Most of the dealership's growth, though, would come in the next 50 years.

Bradsher likes to think that he has contributed to Gregory Poole Cat's success in his time with the company and listening to a rundown of the many positions he has held with the dealership leaves little doubt of that.

Following the completion of his sales training, Bradsher moved to Rocky Mount in 1972 to work the sales territory there for approximately two years, followed by a transfer to Wilmington as a branch manager at the 23rd Street Gregory Poole Cat store.

"I moved down there to not only be the branch manager, but oversee the construction of the new facility, which is still there off U.S. Highway 17 South," he said.

"In 1975, the company brought me back to Raleigh," Bradsher added. "At the time, we had a North Carolina regional concept made up of our western, eastern and southeastern regions. I became the western region sales manager where, in addition to having three or four salespeople reporting to me, I handled four or five large accounts. I did that up until 1980, when I moved back to Wilmington as the southeastern region manager, a position I worked for three years. In 1982 and 1983, we experienced a little dip in the economy, so we changed our concept to move away from having regional sales territories back to a more centralized management structure, and Gregory Poole Cat had to downsize some."

That led Bradsher to go back out on the road to work in the Wilmington sales territory in 1983 before once again coming back to Raleigh for good in 1984 as the dealership's marketing manager for six months. A year later, he was promoted to be the company's vice president and general sales manager, a position he held for two years.

"It was Greg Poole Jr. who asked me to be vice president and account manager for the quarry accounts in 1987, the last role I took on with the company," he said.

Bradsher leaves Gregory Poole Cat with the satisfaction that the company gave him the opportunity to work in a job that he genuinely enjoyed, he said, while also allowing him to provide for his family.

"They have taken good care of me over the years, as they do for all their employees," Bradsher added. "This company has the highest integrity of any I know, and its values have always matched my own. In addition, I have enjoyed working with all our wonderful customers — there are a lot of good people in this industry. I consider my customers to be like my family because often I spent more time with them than my real family, and I have enjoyed being able to serve them, watch them grow, and have felt, in a way, that I was a little part of their success. In turn, my customers have treated me like I was a member of their company, and that has been rewarding, too."

His personal connection to all the folks he has worked with over the years is often measured in generations, leading to a lot of repeat business for Gregory Poole Cat from many customers.

"Oh yeah, when you have been in this business for as long as I have, you know their children, their grandchildren, and that is special," Bradsher said.

One of N.C.'s Top Construction Dealers

Gregory Poole is a big operation, with eight Cat Construction and Power Systems storefronts in North Carolina. Those branches include two in Raleigh, and one each in Garner, Hope Mills, Mebane, Washington, Jacksonville and Wilmington. There also is a new rental store in Holly Springs, a forestry branch in Pittsboro, and two marine branches near the coast in Wanchese and Beaufort.

In addition, the company's Lift Systems division operates in Virginia, West Virginia and South Carolina, as well as in the eastern North Carolina territory.

"In the construction equipment division, we primarily offer Cat products," Bradsher said. "We also have Weiler products for paving and forestry that work with Cat equipment. Of course, we work with a lot of Allied brands in our new GP Rental division, and our lift-truck division sells Hyster and Yale. In all, we have a total of 23 branches."

Just in the Raleigh headquarters, the equipment dealer has more than 400 employees, he said, with a companywide total of approximately 1,300.

Over the decades, he said that Gregory Poole Cat was faced with many challenges to its success, among the more serious being the Great Recession in 2008-09, and the pandemic threat of 2020-22.

"They were big challenges, no doubt, but during both of those crises we felt that we had to keep our employees, so we made every effort to do that. We had some attrition each time, but we did not do any layoffs during either of those downturns."

A hedge against those obstacles has been the fact that Gregory Poole Cat is a well-run, financially stable company tough enough to withstand those perils.

"I think our management has historically kept us financially sound during downturns," he added. "With COVID, we had a plan in place, and I can tell you that we have come through it extremely well."

Bradsher is happy to leave Gregory Poole Cat at a time when its construction equipment business is booming again, adding, "Right now, we can't get enough equipment. There is a tremendous amount of construction going on in the eastern half of the state. For instance, just in the Triangle, there has been the work on Interstate 540, I-440, and all the development that is going in because of all the people moving to this area. I read recently that the population of Raleigh-Wake County is now larger than that of Mecklenburg County, although the greater Charlotte area is much bigger than the Raleigh metro area."

It is also safe to say that a lot of the equipment used on projects in the region over the last few decades were obtained from Gregory Poole Cat, due in large measure to Ben Bradsher. CEG