Results of the testing will dictate future wall construction, which has not yet been funded by Congress. 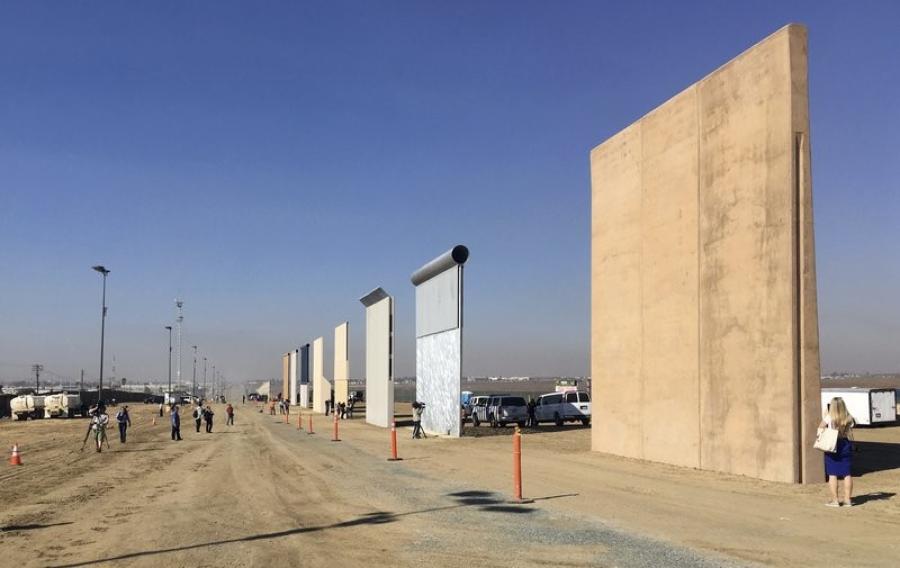 The testing lasting up to two months could lead to officials concluding that elements of several designs should be merged to create effective walls, said Ronald Vitiello, U.S. Customs and Border Protection's acting deputy commissioner. That raises the possibility of no winner or winners.

The U.S. government announced Oct. 26 that prototypes for President Donald Trump's proposed border wall with Mexico have been completed and will be subjected to punishment to test their mettle — by workers wielding sledgehammers, torches, pickaxes and battery-operated tools.

The testing lasting up to two months could lead to officials concluding that elements of several designs should be merged to create effective walls, said Ronald Vitiello, U.S. Customs and Border Protection's acting deputy commissioner. That raises the possibility of no winner or winners.

Results of the testing will dictate future wall construction, which has not yet been funded by Congress.

The testing won't start for at least a month because some concrete in the wall prototypes still needs to dry.

Vitiello told reporters that workers during the 30-60 day testing period will try to answer basic questions: “Can it be climbed? Can it be dug under? Can it withstand cutting tools?”

Here are some questions and answers about the border wall project.

Why Were the Prototypes Built?

The U.S. currently has 654 miles (1,052 kilometers) of single-layer fence along the 1,954-mile (3,143-kilometer) border, plus 51 miles (82 kilometers) of double- and triple-layer fence. This summer, the government picked six companies to build models to guide future construction.

Each model is spaced about 30 ft. (9.1 meters) apart a few steps from a fence made from old steel airstrip landing mats separating San Diego from Tijuana, Mexico.

Each reaches the maximum allowed height of 30 ft. (9.1 meters) or close — significantly higher than existing walls. Vitiello said the height was what struck him most on his tour Oct. 26.

The concrete walls are solid, preventing agents from seeing through them and into Mexico. Others are made of thick metal poles. Some are topped by round tubes, which are less vulnerable to grappling hooks than sharp edges.

One requirement is for the walls to be “aesthetically pleasing” from the U.S. side. ELTA's solid metal wall features six light blue squares with white trim on the bottom third, topped by dark blue beams and metal plates.

Texas Sterling's has a gray surface stamped with patterns of different-sized bricks, like driveways or sidewalks for upscale homes. There is a steel plate on top with prongs that feature three metal spikes, resembling an agave plant.

Trump has asked Congress for $1.6 billion for the first installment of his wall. It would replace 14 miles (22.4 kilometers) in San Diego and build 60 miles (96 kilometers) in Texas' Rio Grande Valley, the busiest corridor for illegal crossings.

It's unclear to what extent Trump will weigh in on the selection, and Vitiello said he didn't know if the president will visit the site. Trump has expressed interest in including solar panels, which are not part of any of the prototypes.

A hearing on the administration request to dismiss the lawsuits is scheduled Feb. 9 before U.S. District Judge Gonzalo Curiel, a target of Trump's enduring scorn for his handling of complaints against the now-defunct Trump University.