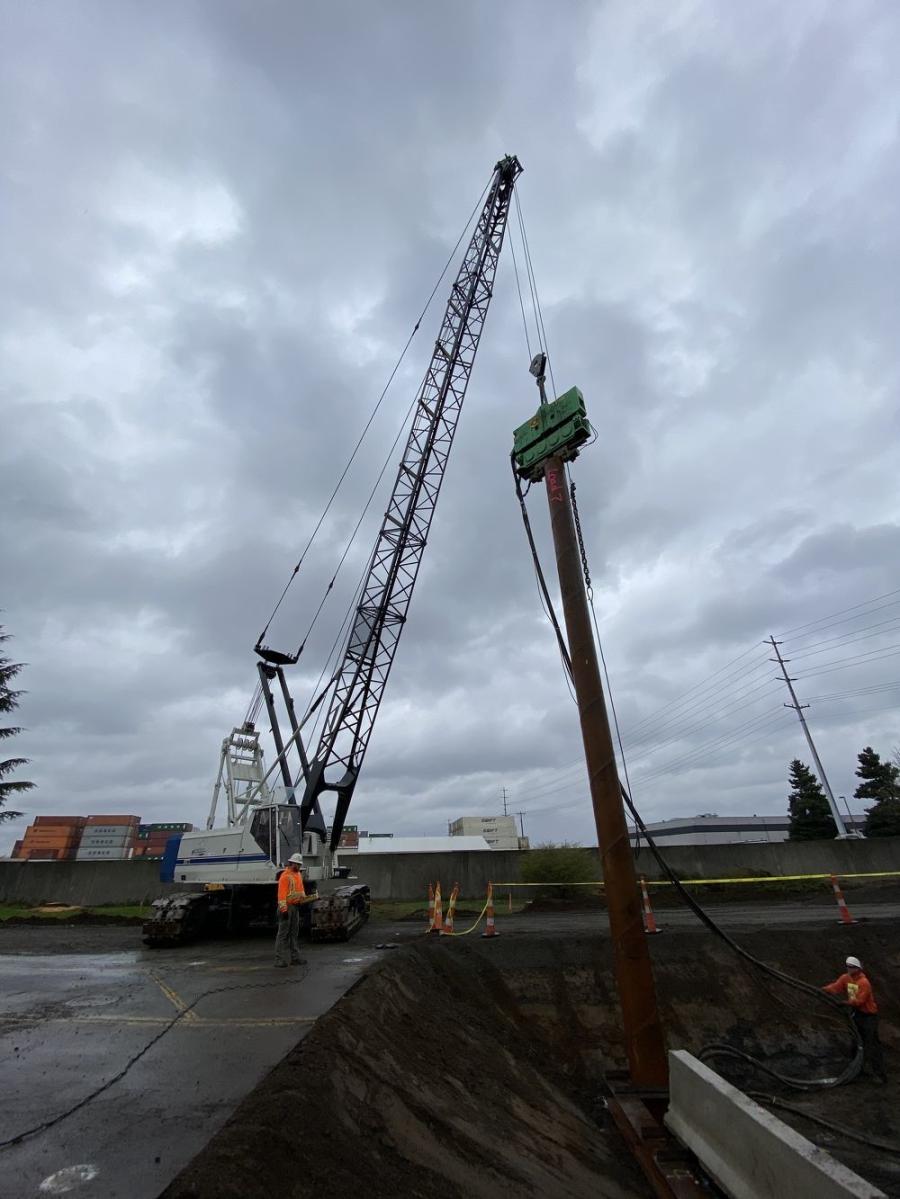 Construction on the Portland Bureau of Transportation's (PBOT) $25.8 million North Rivergate Overcrossing project, which is building a new bridge to meet the demands of the expanding industrial and commercial base in the area, began last October.

PBOT awarded the contract to Cascade Bridge LLC to construct the bridge that spans Union Pacific Railroad and BNSF tracks. The 830-ft. long, 41-ft. wide concrete bridge — one lane in each direction, with a sidewalk on the north side and five spans — will replace a level crossing on North Rivergate Boulevard.

The level crossing was closed to traffic in March, and during the construction North Time Oil Road will be used as a detour to give Cascade Bridge crews the space they need to complete the overpass bridge in May 2021 and open it to traffic in June 2021. The project is expected to be completed a few months later.

Materials removed should include 2,000 tons of asphalt and 7,500 tons of earth and rock. 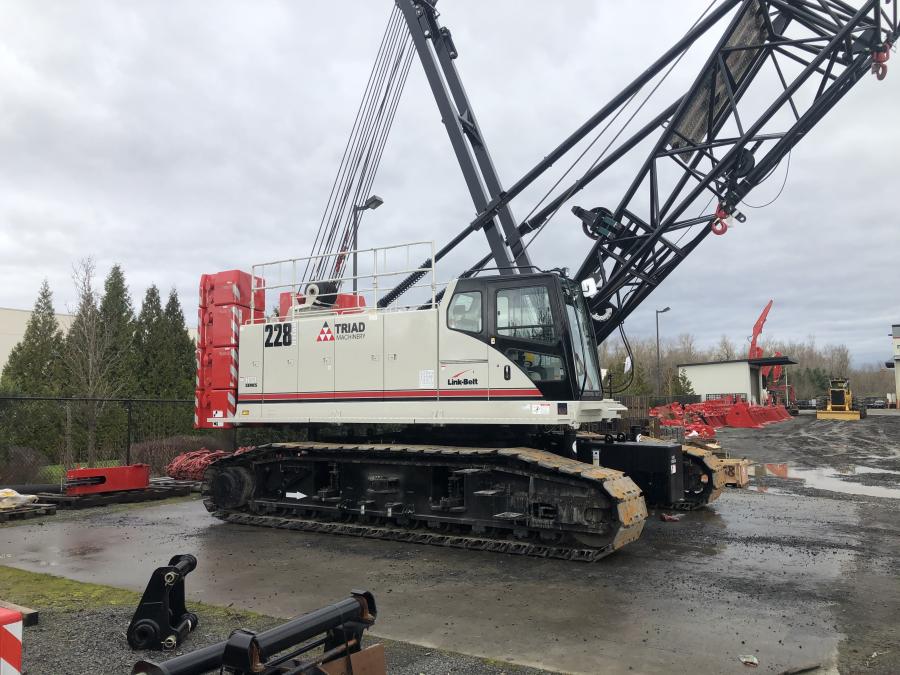 Cascade is taking delivery of a 2020 Link-Belt 228 HSL 130 ton lattice boom crawler crane from Triad Machinery in Portland for the project. Also to be used are a Link-Belt LS218H 100 ton crawler crane, and a 50 ton Link-Belt hydro crane. International Construction Equipment (ICE) will be on-site — a model 44 vibratory hammer, an I-30 diesel hammer and an I-125 diesel hammer that is being rented from ICE.

"The I-125 hammer, 317,000 pounds, is a really large hammer — probably the largest used around here in my memory and we've been building bridges for 19 years," said Dave Mingo, Cascade's general manager. "It's mostly used for off-shore drilling. We've never used a hammer that big."

"We expect to encounter normal wear and tear and our shop is about eight miles from the work site, so mechanics can easily be sent out to do repairs," said Mingo. "Some of the main wear and tear issues we see on a project like this are the wire rope lines, the sheaves and rollers, boom pins and pendant connections of the cranes that all see increased strains due to the vibrations and stresses created by the pile driving processes. We don't plan to staff an on-site mechanic, but because of the close proximity of our main office to the project site, we can still respond to maintenance needs in minutes. Keys to maintenance on this project like this are no different than any project, staying on top of preventive maintenance schedules for each piece of machinery. You need to take care of the little things to prevent big issues."

The firm purchases and rents equipment from dealerships such as Tyler Rental Inc. in Chehalis, Wash., and Northside Ford in Portland, Ore. Tyler will be supplying forklifts and manlifts via rentals. Northside Ford provides Cascade Bridge will all of their pickup and utility trucks

"We enjoy the relationships with the dealerships we work with," said Mingo. "We count on their expertise and help, especially on the repair side when we need repairs. When we do have issues, they are quick to respond to do repairs and keep our crews moving. We worked with Triad to order the new crane. It is now in Portland —it has been assembled and is being tested via a trial run. It will then be disassembled and delivered to us on March 23."

Thus far, Cascade Bridge crews are completing Stage 1, which is moving and relocating existing utilities and providing temporary access for businesses on the north side of Rivergate Boulevard once the level crossing is closed. Stage 2 will concentrate on the bridge construction.

"The temporary access will have vehicles go through the future landscaping and parking areas between the road and their buildings," said Mingo. "There will be separate accesses for the businesses on the east and west sides of the tracks, but they won't cross the tracks. The level crossing will only be open for us during construction."

Crews are installing storm sewer and water lines, removing the infrastructure underneath the existing roadway where the approaches for the bridge will be placed.

The road where the new bridge is being constructed was closed, which allowed bridge construction to start. 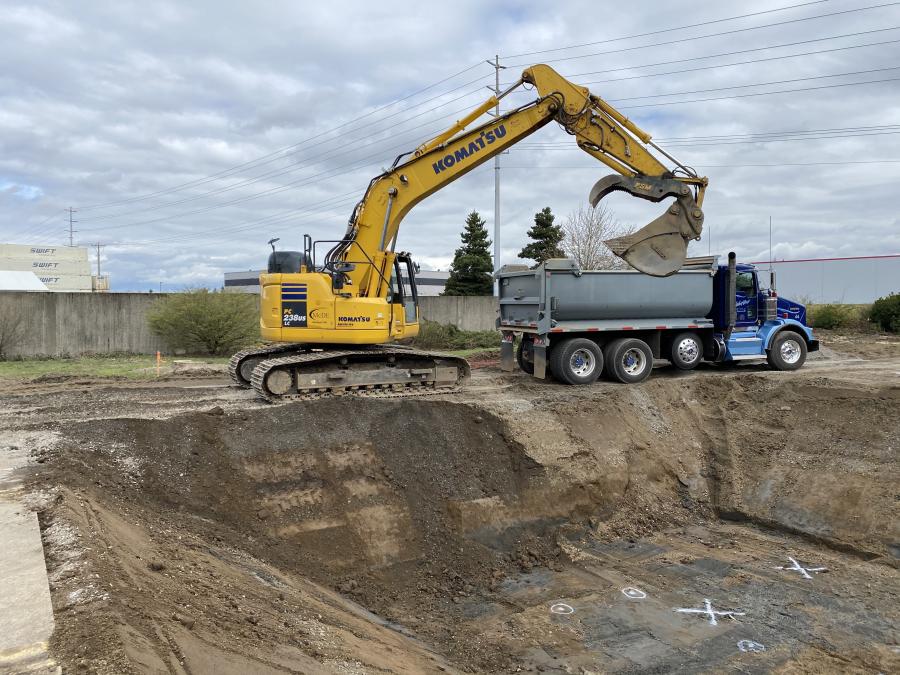 "We've had our electrical subcontractor, NorthStar Electrical Contractors [Sherwood, Ore.], come in to do some temporary illumination for the new access roads," said Mingo. "The relocations are going well, but things are never exactly where they're shown on the map — it's always hard to locate them perfectly and then there's always little surprises — pipes and infrastructure can be at different depths and spots and it always takes extra coordination work, but we're getting through it."

The work site for the new bridge construction is not large.

"We have a small spot of city property on the east end of the project and it's a tight work area because of the wetlands on the south side and the businesses on the north side of the road and the overhead power lines," said Mingo. "We have city trailers and ours sharing the same space."

The bridge construction will require some night work for the pile driving, which will see 68 high capacity piles placed at depths of almost 200 ft.

"These will be some of the deepest and highest capacity piles we have come across," said Mingo, "and because of the nature of the soil, the approaches at each end of the bridge, geoform blocks will be used. Their use is not as unique as 20 years ago. We used them in 2005 for the Lombard Street Bridge that we built, about 1,000 yards from this work site. We've done a number of projects for PBOT over the years and we've always had a good relationship. We're currently doing an emergency bridge repair for them.

"Working with two railways makes it a little more difficult," he added. "We will have two separate sets of flaggers and sets of submittals to send. It's important for the railways to move their trains and have safe tracks to use."

The approaches are approximately 300 ft. long each. The first and last of five spans are 145 ft. long and the intermediate three spans are 180 ft. long, each with piers — two columns attached to a crossbeam.

"The first step is to drive the 68 high capacity piles, and then we'll build the substructure so the footings, columns, crossbeams and end abutments can be placed," said Mingo. "We'll be using steel plate girders and do a cast-in-place concrete deck on top of them. We have 12 months from when we close the road to complete the bridge. After that is done, we have another two months to finish the landscaping and repave the detour road — give it an overlay after all the traffic that will be put upon it."

The piles will be put in with 60-to-70 ft. long pieces that will be spliced and welded.

The ready mix concrete is being provided by Cadman Inc., Vigor Works LLC is supplying the structural steel, and the rebar is from Western Rebar.

On the north side of the boulevard, the rail tracks separate the operations of two industrial firms and on the south side are forested wetlands.

The bridge was designed by HDR Inc.

"The design is complicated by the poor soil conditions in the area, which required a zero net load bridge," said Dan Layden, PBOT's project manager. "The approach structures will be constructed with lightweight geofoam fill material. They are over-excavated and replaced with lightweight material to balance the weight of the bridge. The bridge footings are founded on steel piles driven 150-to-200 feet into the bedrock."

"The most significant design and construction challenge is the need to construct the bridge at net zero settlement impact," said Rivera. "This is necessary to protect existing businesses, but has significantly increased the cost and complexity."

Private utilities, such as PGE, Northwest Natural and Comcast have moved their equipment and infrastructure, and Cascade Bridge is relocating the water and sewer lines. CEG