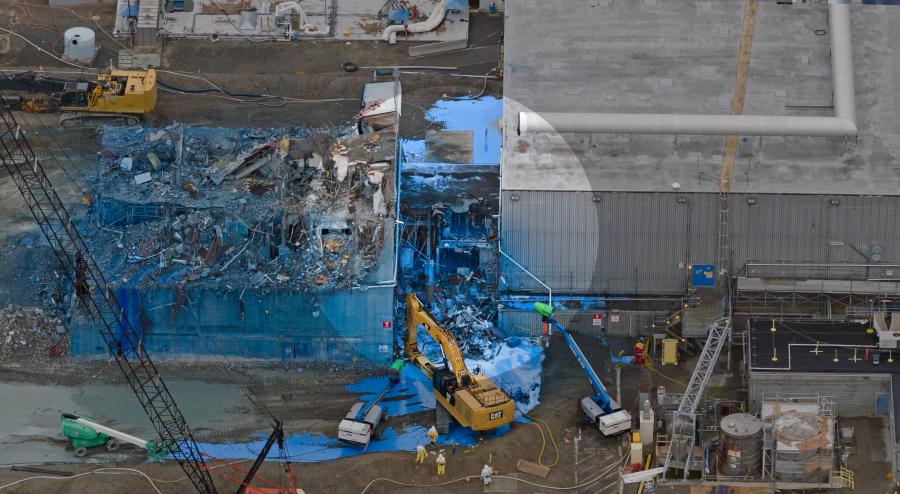 Demolition of the americium recovery facility (located within the shaded circle) proved to be one of the most challenging portions of the PFP project. (Department of Energy Richland Operations Office photo)

In the west area of the Hanford Site's Central Plateau, demolition is under way on a building that played a significant role in the United States' weapons program history. From its production start in 1949 until its official shutdown in 1996, the Plutonium Finishing Plant (PFP) was responsible for producing two-thirds of Cold War-era's plutonium. Once the official shutdown order was issued, the demolition of the building was certain but unlike other concrete and steel structures scheduled for demolition, excavators couldn't just tear into the building.

“It's taken us about 20 years to get the facility to a safe condition where we can do demolition,” said Kelley Wooley, deputy vice president of CH2M Hill Plateau Remediation Co. (CH2M), the contractor that has been involved in the entire decommissioning process of the PFP.

The americium recovery facility is better known as the McCluskey Room, which was named in honor of Harold McCluskey who survived a workplace accident that exposed him to americium-241 at 500 times the allowable limit.

Wooley said that the first steps in the decommissioning process were doing an initial characterization of the project and shipping the on-site plutonium into safe storage.

“And then in the late '90s, we started to decontaminate the facility to where we could start isolating the process systems and glove boxes in earnest,” he explained.

A glove box was where the Hanford workers, using gloves and behind protective glass, could safely handle hazardous materials. Although certain features such as glove boxes were found throughout all four buildings, each building required its own decontamination protocols due to its specific function within the overall plutonium processing process. For example, inside the plutonium recovery facility, CH2M's crews had to refurbish an overhead crane, which Wooley described as “quite problematic,” so they could move the pencil tanks out of the facility.

In the early 2000s, CH2M's crews focused on system deactivation and the overall decontamination phase, which Wooley said took up the bulk the time. That's because throughout the buildings were plutonium oxide powders that are “flighty and very hard to maintain control over,” he explained.

In the canyon facility housed in the plutonium recovery facility, a rubberized paint called Blue Max was used because of its flexibility. The canyon facility is where the plutonium nitrate solutions were recycled and purified before being sent elsewhere in the PFP, Wooley explained, and since the canyon is concrete, using Blue Max gave them more binding strength to hold the particulates together.

Decontaminating the McCluskey Room proved to be one of the most challenging portions of the PFP, although it was only about the size of a two-car garage and two stories high.

“[Our crews] went in with a full-bodied encapsulating supplied air suit,” Wooley said. “The individuals wore anticontamination clothing inside of that suit, and they were basically in a pressurized breathing air suit on the outside with respiratory protection on the inside.”

It took nearly three years to decontaminate the McCluskey room, and he proudly shared that “it was completed with no major incidents or exposure to personnel.” And this safety record holds true for the rest of the PFP decontamination work as well, Wooley added, describing the preparation work as “second to none.”

When it came time for the demolition work, “we looked at the complex itself [and] we broke it down for demolition into [its] four major facilities,” Wooley said, with Tom Teynor, project director of the Department of Energy, adding that each facility was then broken into zones based upon its level of contamination.

“By doing a zone approach, we're not exposing anyone to more than a category three level material at any one time,” Teynor explained. “Like any complex problem, you break it into smaller pieces until you can control it.”

The plutonium recovery facility was the first building scheduled for demolition; its demolition started in November 2016 and is still under way. Next was the McCluskey Room whose demolition was finished in April 2017. Since it was the most radiological contaminated facility, and the most challenging, it was broken down into seven zones. The ventilation house came next,but the demolition was stopped once it was 95 percent completed.

“Because it was attached to the PFP proper, it was integral to some of the ducting so we were not going to approach that demolition until 234-5Z's [plutonium finishing plant] demolition started in late July,” Teynor said.

Although the actual work to demolish the concrete and steel structures required the use of excavators and high-reach shears, equipment found on other similar work sites, and while the process of destroying the concrete buildings is standard, the PFP required its own specific demolition plan.

In spite of the decontamination measures of stripping the building's interiors and applying fixatives on every surface, there is still the risk of releasing plutonium oxides into the atmosphere, potentially exposing the crews to radiation.

An “airborne radioactive area,” is how Wooley described the area surrounding the PFP's demolition site. To minimize this radiation risk, the demolition plan included not only the sequence of how the buildings would be dismantled, but also the amount of work that could be undertaken each day.

“We used an air dispersion model that determined what the potential air contamination levels of each building would be so we could manage how we go about demolishing the building and which buildings we could work on simultaneously,” Wooley explained. “And with building samples taken on a daily basis to determine the actual contamination levels, which are then fed into the model, the cut plan for each day could be increased or decreased to ensure they are within the limits of the air dispersion model.”

On-the-ground efforts also are used to minimize the release of plutonium oxides. Remotely controlled aerial lifts, or “very special nesting units,” according to Wooley, applied water misting to control the dust. Large-volume water cannons, similar to those used by fire departments, also are deployed. These measures help do “real-time lockdown,” he explained.

The original plan called for use of one misting unit but he said that since it worked so well, they purchased a second unit for use on the McCluskey Room to better control the dust.

To ensure that the demolition is not releasing more contamination than expected, a continuous, real-time air monitoring system is in place to sound an alarm if a potential release of plutonium oxides is greater than what the model predicted.

“All these continuous air monitors are remotely monitored in a separate trailer by trained personnel,” Teynor said. “They monitor the equipment as [the measurements] came in and they provide a heads-up and can be in direct communication in real-time with the supervisor.”

Equipment operators can only work within the outlined scope of work that is provided at each morning briefing. The reason for this, Teynor explained, is to “maintain the integrity of the building, the structural strength, but also as we work our way into these buildings, we're prepared to remove the special-handle items as necessary when they're exposed.”

And to add further complexity to the demolition work, operators had to be aware of the type of material they are working with to ensure it is separated into its appropriate waste stream. The majority of the concrete and steel, along with some ducting, is considered low-level mixed waste that is disposed of in Hanford's on-site Environmental Restoration Disposal Facility; the other material considered transuranic is awaiting shipment to the US Department of Energy's Waste Isolation Pilot Plant located outside of Carlsbad, N.M.

“How we distinguished between the transuranic and the low-level waste is we went through an extensive period of sampling and characterization using non-destructive assay of the entire interior of these facilities,” Teynor said. “Such that we're able to identify those items that are transuranic and they've been either removed or prepared for removal during actual demolition using high-visibility paint.”

This means that during each daily morning briefing, not only is the cut plan discussed but also the safety measures in place. The CH2M workers closest to demolition activities are required to wear anticontamination clothing, also referred to Anti-C, and use air-purifying respiratory protection. There also are full-time industrial hygienists who monitor the personnel, and every radiation worker is required to provide regular bodily samples to ensure they haven't been exposed to radiation.

With temperatures in eastern Washington regularly entering triple digits, heat stress is another work place hazard, and the demolition schedule has to be adjusted accordingly.

“When you put people in that type of personal protective equipment, one of our biggest physical safety issues is heat stress,” Wooley said.

Starting in June, they went to a tropical shift, which required a start time of 4 a.m. for the 400-plus crew. Were there challenges hiring people who were willing to work in a radiation-contaminated site? “We've always been able to get staffing to fill the numbers that we would need in order to keep the scope that was upcoming staffed,” Wooley said. “It does take, as you imagine, awhile to get someone off the street to come in and get through all the trainings.”

And the training is “rigorous,” he added. With the PFP being considered a clean-up operation, the site falls under OSHA's Hazardous Waste Operations and Emergency Response Standard, and each person is required to take 40 hours of safety training. In addition, some employees have radiation worker two training and fifth-element material handling.

Wooley remarked that although CH2M has handled similar demolition jobs, “this open-air demolition is one of the more challenging facilities we've ever tackled.”

In June, more than 300 of CH2M's crew had to take cover when the air monitoring system alarms sounded. According to a KING 5 news report on Aug. 3, 2017, a number of the employees were tested and a small number of the results came back positive for “internal exposures.” To ensure worker safety, the new deadline for completing the demolition to slab-on-grade is scheduled for later this year or early next year.

Of the PFP's demolition, “it has been a very challenging,” Teynor remarked. “Overall, we've had our hiccups, it's not been perfect, but the contractor's been very resilient in moving forward with the right mix of people and getting the work force behind them, which is hard to do when you're working yourself out of a job.”