Hawaii's $8B HART Project Is Chugging Along

A project that's been in talks for decades is one step away from completion. 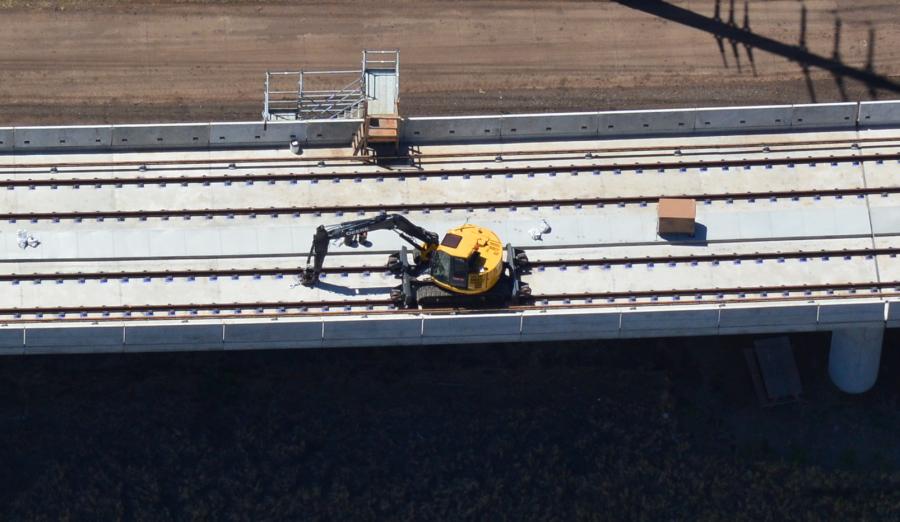 Honolulu Transit photo. Rail tracks are laid on the guideway that runs parallel to Kualakai Parkway between the East Kapolei station and the West Oahu station.

Honolulu just moved one step closer to seeing the completion of a rail system that's been under construction since 2009 and in talks for decades. The Honolulu Authority for Rapid Transportation (HART) recently awarded the contract for a third section of the Honolulu Rail Project, part of an elevated rail system expected to be fully operational in 2024.

“We announced the award of a contract to build 5.2 miles of guideway and four stations that go with those 5.2 miles,” said Bill Brennen, spokesman for HART. “Shimmick Construction, Traylor Bros. Inc. and Granite Construction formed a joint venture and made a proposal and was awarded the contract for $874.8 million. This section runs from the Aloha Stadium passed the Pearl Harbor Naval Base through the Honolulu Airport and ends up at the Middle Street Transit Center Station.”

The rail project will cover 20 mi. (32 km) over an elevated guideway with 21 stations. All are along the south shore of Oahu where about 70 percent of the population and 80 percent of the jobs are within a half mile to a mile of the alignment, Brennen said. The total cost of the project is expected to be between $7 to $8 billion with $1.55 billion provided by the Federal Transit Administration.

“About five miles of track is fastened to that guideway,” Brennen said. “That's the elevated bridge the trains will run on. What we do is build columns first to provide the elevation. Then they lay the guideway and then the track. Even before all that, we have to move all the utilities underground. That's been the big challenge. When you open up the ground you never know what you are going to get. You can get drawings from people who built before and they will tell you this waterline is there and electrical conduit is there, and then it's not there. Or perhaps the cable company came in and put something on top that wasn't recorded.

“In this latest contract, we had to let a separate contract for advanced utility relocation work so it's done before the contractor who gets the contract to build the guideway and stations gets started. That is still going on.”

While there was some private property acquisition, most of the work is taking place in the median of government owned roads, he said. In some cases, contractors have to close highway lanes for their own safety and that of the public. While it's lead to some traffic congestion, Brennen said HART has been putting extensive information on the lane closures and offering the public information about what detours are available. Often, the work calls for delays rather than closures or they close the lanes late at night, especially as it relates to the use of heavy equipment.

“There are big drills,” Brennen said. “Some of the work is what they refer to as balance cantilever work. They work with big yellow travelers that start from two ends and build toward the middle. There are a couple of stretches where the guideway goes over the freeway. That requires the travelers that help lay those segments in the manner I described. Each segment of guideway weighs 50 tons. It's made in the precast yard and trucked to guideway. The crane picks them up and hoists it up to the guideway where it is put in place. We try to do some of that work at night when there is less traffic and have to close the appropriate amount of lanes. It has been very safe.

The first four train cars were delivered in March, and in addition to the guideway and stations, the project will also require the construction of a rail operations yard where the trains will be housed.

At its peak, the project is expected to create 4,000 construction jobs, plus an additional 10,000 jobs indirectly related in other industries. The project is being funded in part by a half of a one percent surcharge on top of the general excise tax (GET).

“When you purchase something you pay what most people consider a sales tax,” Brennen said. “It's 4 percent statewide and 4.5 percent in Honolulu on the island of Oahu. Because tourism is the number one industry in the state and on Oahu, tourists pay that same GET tax we all pay. When they go buy sunscreen and sunglasses and ugly shirts, they pay a portion. Twenty to 30 percent of the GET is paid for by tourists. We feel they are helping to pay for this system. The direct investment of federal and local funds will boost the economy and increase demand for goods and services at local businesses, while increasing tax revenues for the city and state. Transit oriented development around rail stations will sustain the demand for jobs in a variety of industries for many years in the future.”

When operational, the trains will run from 4 a.m. until midnight with about 17 of the four-car trains operational at peak travel times. The rail project is expected to eliminate an estimated 40,000 car trips, easing congestion on streets and highways.