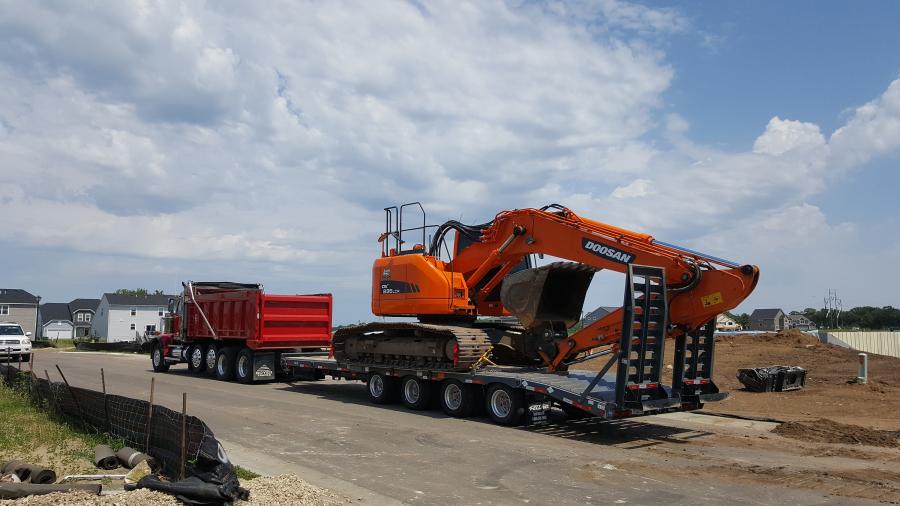 Whether you are a contractor that operates a large outfit with lots of earthmovers or a small builder with just a compact loader and skid steer, if you use heavy equipment, none of the pieces are of much use to you if you cannot easily get them to the jobsite.

And considering that most heavy earthmoving equipment, cranes, pavers and lighter pieces, such as skid steers, cannot be driven on roads and highways, owning or leasing a heavy-haul trailer is easily the best answer.

Trailers are the muscle men in the construction industry, able to lift and haul mighty loads safely and efficiently. Their brute strength, coupled with increasingly improving maneuverability and few electronics, makes them very popular.

Luckily for contractors and dealers, there are dozens of different trailers on the marketplace built to suit all needs and hauling capacities.

Among the best of the lot is the ubiquitous lowboy trailer, which can carry legal loads up to 12-ft. tall, something other higher-decked flatbed trailers cannot. That makes the lowboy best-suited for the heavy construction business as it can transport large single earthmovers or cranes, as well as multiple smaller machines. 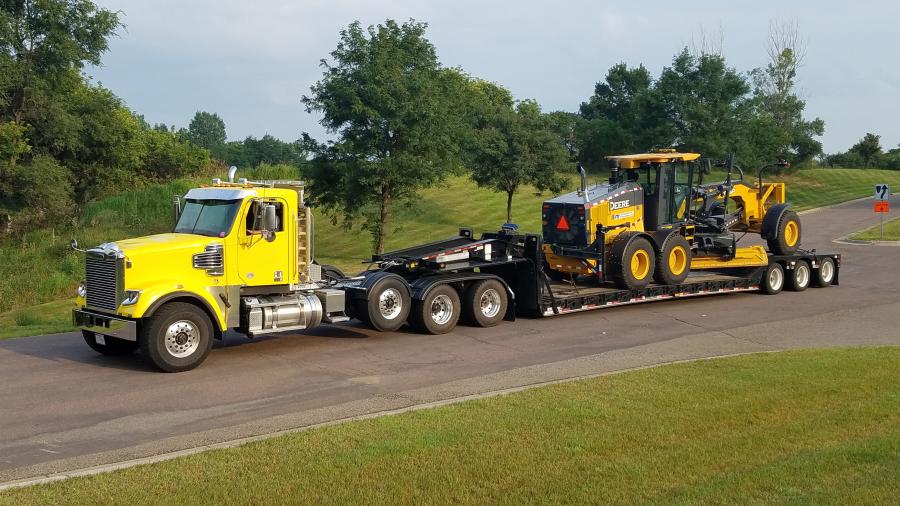 A lowboy has two drops in its deck height, one just behind the gooseneck and another before the wheels. This allows for the deck to be closer to the road and, therefore, low enough to safely haul most oversized equipment. A standard two-axle lowboy trailer can haul up to 40,000 lbs., but by adjusting the number of axles, that capacity can be increased much higher.

Pulled by truck cabs, lowboys are easy to spot on the highway due to their distinctive design. They are built with a gooseneck, or a curved projecting arm, that attaches the trailer to the inside of the truck bed.

Loading a lowboy can be accomplished from the front or behind depending on its design. Some models, too, are built to place the trailer under the load and lift it. That makes them ideal for moving bulldozers, backhoe loaders, excavators and other heavy vehicles, machinery or equipment.

Depending on what kinds of equipment and building supplies they need moved to their work zone, contractors also can consider other haul trailers.

Among those on the market is the drop deck trailer, a smaller capacity transporter designed to carry compact equipment like a scissor lift or skid loader. Drop decks can be equipped with various ramp options or with a deck-tilt feature.

Deck-over tilt trailers allow operators and crews to easily load equipment without using ramps. This not only makes loading and unloading equipment easier, but also reduces the risk of work-related injuries.

Semi-trailer lines are built to haul the heavier loads and come equipped with ramps or hydraulic lift options.

Among the most respected manufacturers of these construction-industry staples are Towmaster Trailers and Felling Trailers, both headquartered in Minnesota.

Towmaster and Felling each boasts of a large selection of trailer models that work well within several different industries. 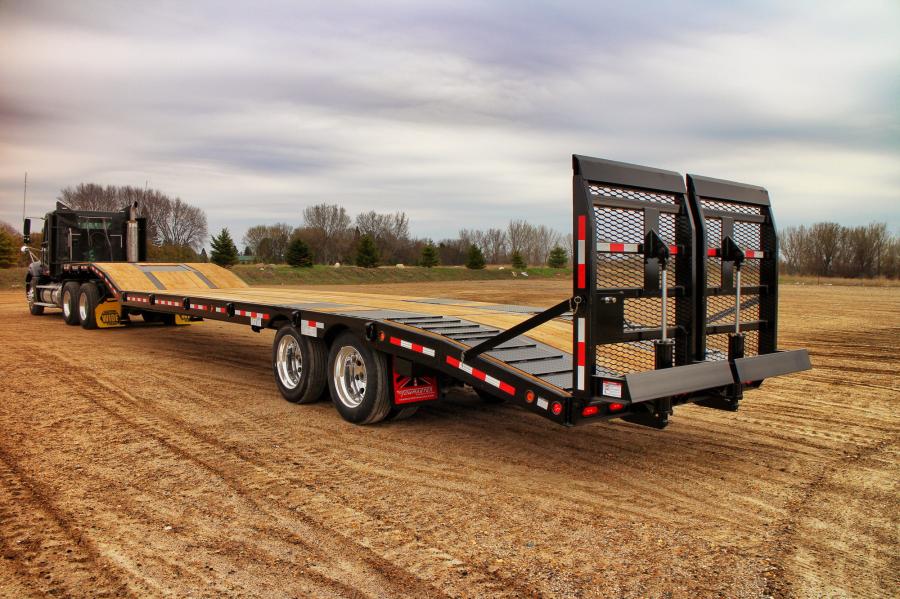 Towmaster, for instance, offers more than 60 models in 10 different styles. Each model can vary in deck length and have several optional features, thus creating hundreds of custom configurations.

Almost all types of equipment can be hauled on Towmaster Trailers, including excavators, graders, as well as lawn and agricultural equipment.

"Each trailer is designed to be equipment-specific, to some degree," said Shane Zeppelin, Towmaster's marketing manager. "You can haul a wide range of equipment types on our trailers, but no one model is designed to haul all kinds of pieces. When transporting multiple equipment, have to factor in weight placement."

Smaller construction equipment can be hauled on Towmaster's drop-deck trailers, which means the deck is configured between the fenders, he added.

"This allows a lower center of gravity when hauling equipment weighing up to 20,000 pounds. Wider and larger equipment, though, should be hauled on our deck-over trailers. Here, the deck is located over the wheels. This type of trailer offers higher carrying capacity as well as a more expansive deck area."

Zeppelin explained that deck-over trailers also offer a few loading options. Some models utilize a ramp to load equipment while other models have a deck that tilts to accomplish the same task.

But, he added, when huge equipment needs to be transported, contractors and dealers can turn to Towmaster's hydraulic detachable gooseneck models that detach from the deck area where equipment is then loaded from the front. These trailers are capable of moving equipment up to 120,000 lbs. 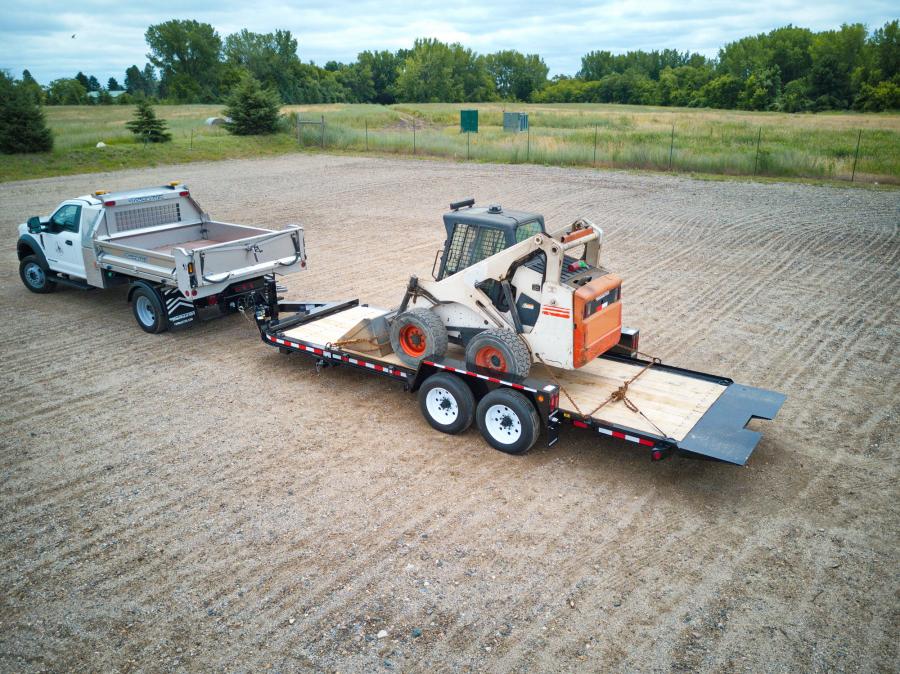 One of Towmaster's most popular models, Zeppelin said, is the T-12DT tilt-deck trailer, built to haul skid-loaders, mini-excavators and other small construction equipment. Another is the Towmaster T-40 deck-over trailer, designed with the capability to move large excavators and backhoes.

"Our T-120DTG Hydraulic Detachable Gooseneck trailer is designed to haul up to 120,000 pounds," Zeppelin explained. "It is used for big dozers and earthmovers. Our smallest model, the T-3DT, is made for hauling small rollers, walk-behind mini-loaders, and scissor lifts."

The manufacturer also builds trailers for utility and rental markets. Other lines are dedicated to hauling debris and even ultra-heavy underground boring machines and equipment.

Towmaster makes its equipment in a large facility in Litchfield, Minn., a small community 66 mi. west of Minneapolis.

A short drive north of there is the town of Sauk Centre, home to Felling Trailers.

A Wide Variety Available From Felling

That company, too, offers a wide variety of trailers for moving equipment and construction-related materials.

According to Nathan Uphus, sales manager of Felling, its product line numbers approximately 240 different trailer models designed and built to haul a variety of equipment, as well as specialty models to haul power poles, cable spools, conduit, and gas pipe. 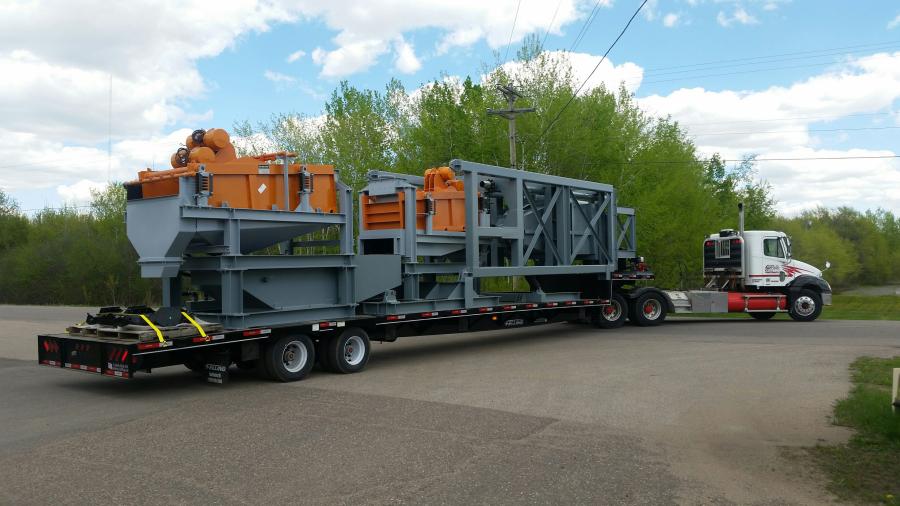 "For example, our drop-deck model lines differ from each other in many ways — tilt or ramp models, with or without sides, varying deck heights, ramp configurations and specialty attachment loading provisions, to name a few," Uphus said. "All are designed with specific equipment hauling needs in mind and we believe we are one of the most diverse trailer manufacturers in the business."

Felling Trailers caters heavily to the underground construction market, which, Uphus explained, utilizes equipment that is generally heavy and not evenly dispersed in terms of weight, meaning that they require a low-loading angle.

"That said, we build quite a few different models to facilitate these types of machines, as well as other trailers that carry the materials to service these machines, i.e., reel and pole trailers," he continued. "And, of course, we also manufacture multiple lines of trailers that can haul compact and heavy construction equipment, such as dump trailers, drop-deck tilts, and ramp models, deck-over tags, and fixed-neck, and detachable goosenecks."

Uphus said loads of this size are usually over-dimensional (width and height) and require specifically-designed models to keep the load's center of gravity as low as possible. Additionally, provisions like swing-out outriggers help keep the wide equipment's weight positioned on the overall structure of the trailer.

"We offer models that have both fixed and detachable goosenecks," he added. "Other manufacturers build models with removable deck sections and pin-on bogies, and they are commonly used in the heavy-haul industry. However, Felling only builds fixed deck-to-bogie sections."

The frame and suspension design of any haul trailer is key in both how successful it works, but also in how durable it is over its life. Those two components, combined with the hydraulics and controls needed to pull their loads, are what engineers at Towmaster and Felling constantly look to improve for end-users.

"At Towmaster, our designers have a reputation of building trailers plenty stout," Zeppelin said. "We use some of the thickest steel and top-brand components to make sure our frames stand up to the grind of daily hauling. The frames and suspensions work very well together and are designed to complement each other." 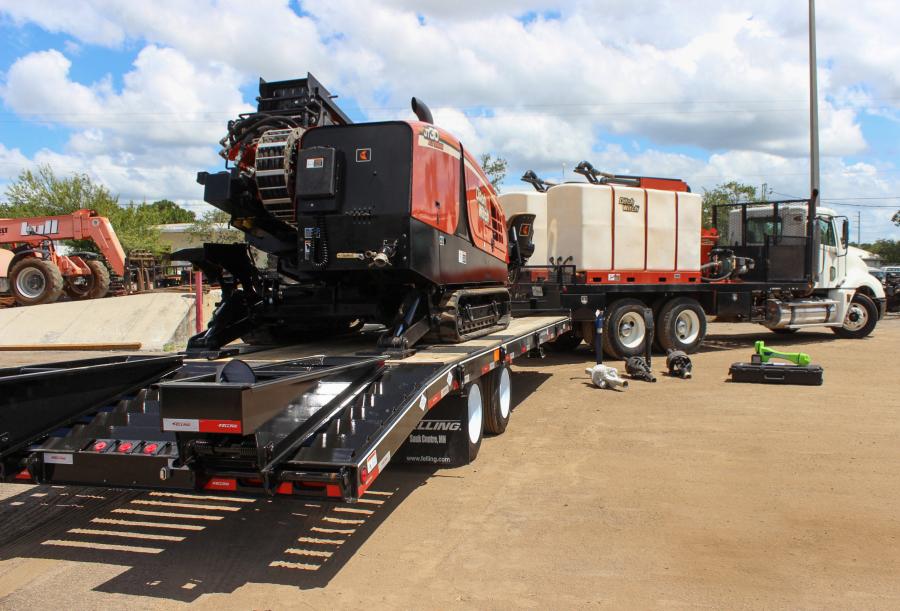 When asked how important the axle-and-suspension system is to the performance and safety of a trailer, Uphus was emphatic in his response.

"I'd say it's a very integral component in that axles and suspension ultimately take the majority of the punishment from the road, especially those roads in disrepair," he answered. "Often, trailers are sized to the equipment at their maximum-load rating with little to no buffer built in to factor for adverse roads, additional weight on the equipment due to mud, etc. Felling tries to spec a trailer for an application with additional buffer built in to account for all these things."

When building any trailer, both manufacturers have found that matching the right axle and suspension to the trailer is crucial to its overall design, said Towmaster's Zeppelin.

"It also is imperative that the user follow the weight guides set by the trailer and axle manufacturer, so they can safely haul their equipment," he continued.

Uphus believes that the hydraulics and controls, too, have improved over the years because components are more refined due to better machining processes. The use of wireless controls on hydraulic valves is becoming less expensive and more reliable — something that is increasing the demand for trailers utilizing the technology.

As an example, for almost a decade, Felling has built air-operated ramps that don't require them to be lifted at all, thus eliminating any chance of injury. To help improve maneuverability on larger trailers, Felling employs lift axles, which reduce the overall turning radius.

For the most part, all trailer manufacturers follow a similar criterion regarding the basic sizing and carrying capacities from model to model.

A typical trailer, according to Zeppelin at Towmaster, has a relatively small number of basic parts: a frame, decking material, suspension, hitch, parking jack, lights, wiring and ramp. 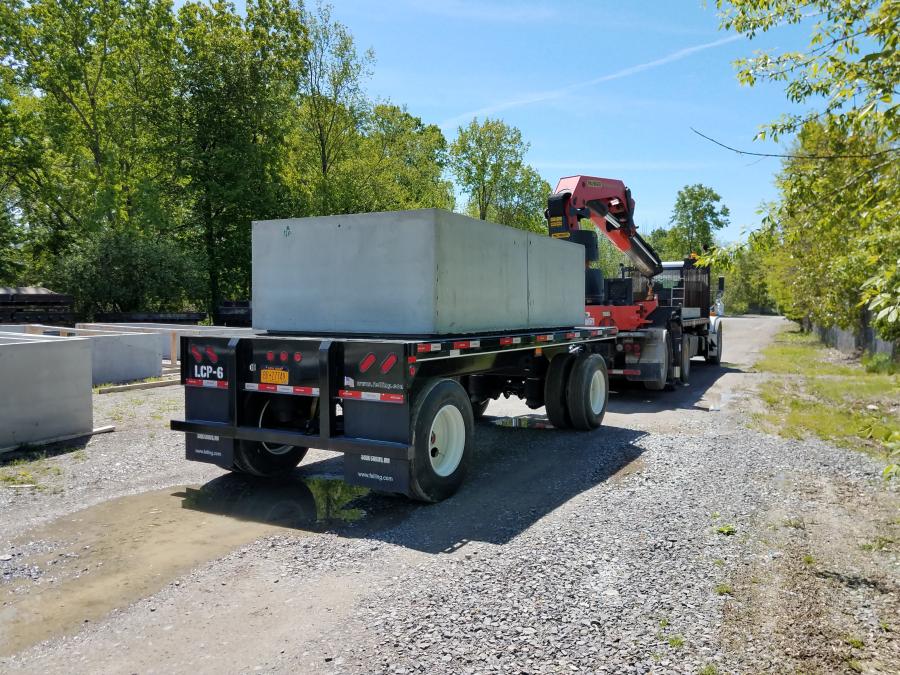 "There are many parts that make up each of these, of course, but all of them can be repaired," Zeppelin explained. "How easy, obviously, would be determined by the extent of the problem or damage. For example, replacing brake parts or a bent parking jack is relatively easy, but to repair a twisted frame would take considerably more work. At Towmaster, we offer trailer reconditioning and repair services at our Litchfield, Minnesota, facility."

There are, though, big differences between how manufacturers design and engineer their trailers to haul their needed weights, as well as the materials used to construct them, added Uphus. Felling Trailers is continually making improvements to its trailer models and options to increase overall stability and that can handle heavier load capacities.

"Trailers have become more sophisticated mainly because of today's design technology, to the point that everything is laid out to fit together like a puzzle," said Uphus. "Fully-engineered products use a lot of sheet- and plate-steel that is cut on a laser to build frame components, as well as formed parts. Past designs used a lot of structural channel and H-beam, requiring more ‘hand fabrication' methods."

These upgrades to the manufacturing process and the upgrades themselves always add a new level of refinement to any equipment or road vehicle. That means makers must maintain a delicate balance between adding new designs and increasing production, while also keeping costs low for their customers.

Additionally, Felling and Towmaster are two companies always working to increase their output, not only to stay competitive in the marketplace, but also to remain profitable despite rising labor costs, material and component pricing.

In the process, though, they have each built a lineup of strongmen to keep the construction industry rolling.

(Towmaster and Felling are two of several manufacturers of haul trailers. Construction Equipment Guide reached out to other companies, but they were unable to participate in this story as of press time.)