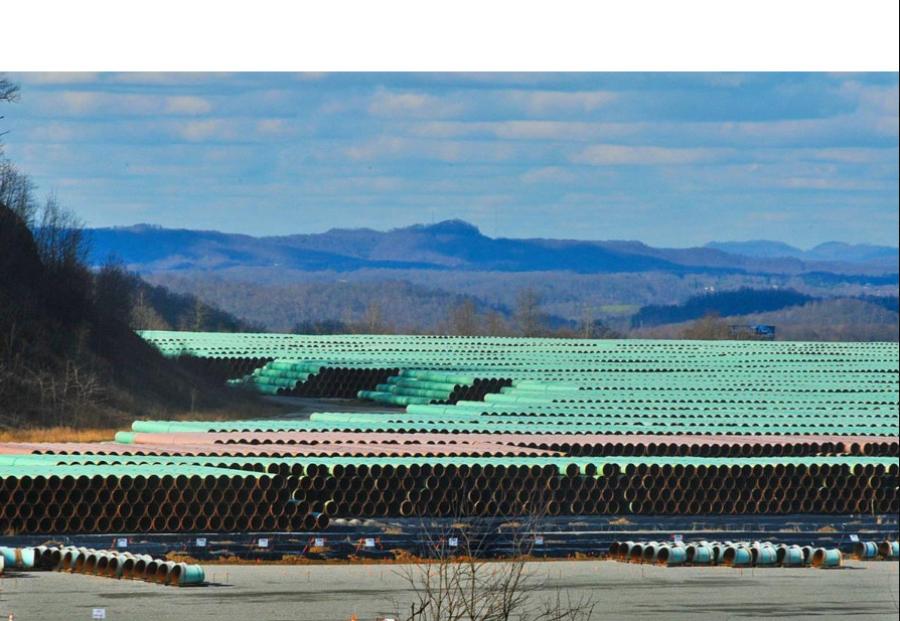 This stockpile of pipes has been sitting for months because of halted construction on the Mountain Valley Pipeline. (T.P. Dalporto/Richmond Times-Dispatch photo)

Virginia regulators halted construction of part of the Mountain Valley Pipeline because of torrential rain until proper erosion control measures are established.

Crews were cutting trees and clearing land along the natural gas pipeline's right of way in Franklin County when heavy rains May 18 and 19 swept away much of the soil they had unearthed, according to The Roanoke Times

Both lanes of nearby Cahas Mountain Road were covered by up to eight inches of mud.

According to the Virginia Department of Environmental Quality and Mountain Valley officials, none of the mudflow reached streams, where it could have done the most damage, but the agency is investigating how check dams and other erosion control measures failed to prevent the mudflow.

Environmental regulators received several calls prior to May 18, before the rain started, from members of the public who were concerned that heavy equipment being used to remove trees and clear a 125-foot swath for pipeline construction was exposing the land to potential runoff problems. The Roanoke Times reported.

Although Mountain Valley crews had erosion control devices in place, “there were some things that completely disappeared” after the rains, including concrete barriers, regulators said.

“Initial reviews indicate the controls were installed properly; however, the circumstances appear unusual and an ultimate cause is under investigation,” Mountain Valley spokeswoman Natalie Cox wrote in an e-mail May 18, The Roanoke Times said. “Upon learning of the issue, MVP crews promptly began remediation activities. The project team remains committed to the safe and responsible construction of this important underground infrastructure project.”

Opponents have predicted that building a 303-mi. buried pipeline along steep mountain slopes will dislodge sediment, which can contaminate private wells and public water supplies if it is allowed to enter nearby streams and wetlands.

Already, regulators have pointed to problems with erosion control in Wetzel County, West Virginia, where the pipeline will start a path that will take it through Southwest Virginia before connecting with an existing pipeline in Pittsylvania County.

On April 25, the West Virginia Department of Environmental Protection issued a notice of violation against Mountain Valley after an inspection found sediment-laden water that had flowed beyond the perimeters of where a compressor station is under construction.

Out-of-control runoff from a hill on a second site caused part of the slope to give way, according to records filed with the Federal Energy Regulatory Commission.

Earlier this year, the Virginia General Assembly passed a law that gave DEQ the authority to order work on the pipeline to cease immediately if there has been, or is likely to be, a “substantial adverse impact to water quality.”

The suspension of construction in Franklin County over the weekend did not rise to that level, with regulators saying that state and Mountain Valley officials agreed informally that stabilization of the area must happen before regular work can proceed, The Roanoke Times Reported.