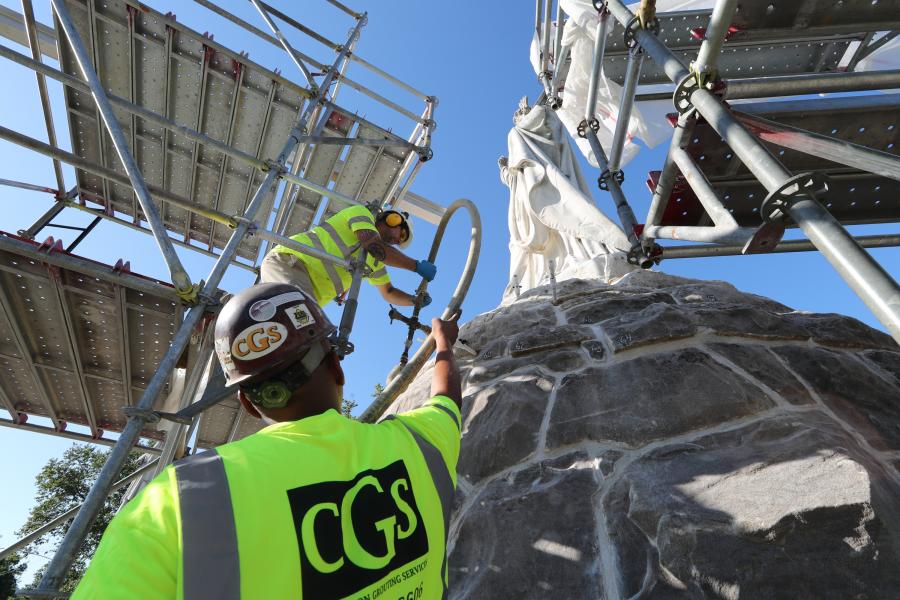 Portions of the Catholic Total Abstinence Fountain in Fairmount Park were in “imminent danger,” according to a “Restoration Services” request for proposals (RFP) issued by the City of Philadelphia in August 2014. Open voids in the foundation were causing ongoing settlement. Compaction Grouting Services (CGS), a Media, Pa.-based geotechnical contractor, would rise to the challenge with high mobility grouting to preserve a portion of this nationally significant historic treasure.

CGS worked as a subcontractor to Philadelphia-based Materials Conservation Co. LLC, a specialty shop that provides professional services for the conservation of architecture, in-situ art, and movable objects. The owner was the City of Philadelphia, although the planning, preservation and property management division of Philadelphia Parks & Recreation procured and managed the project.

A Fountain of Historical Significance

The fountain was unveiled in 1876 as an ornamental drinking fountain for the Centennial International Exhibition, which celebrated the signing of the Declaration of Independence in Philadelphia. Its creation was commissioned by the Catholic Total Abstinence Union of America, an Irish temperance organization that advocated for total abstinence from alcohol. Ironically, the fountain ran dry decades ago.

The now-defunct fountain features a 100-ft.-wide granite base with three steps in the shape of a Maltese Cross. The centerpiece — enclosed by a 40-ft.-diameter basin — is a 15-ft. Moses statue perched on an igloo-shaped marble mound. Four subsidiary statues rise from granite pedestals at the tips of each arm of the cross, including Archbishop John Carroll, Charles Carroll of Carrollton, Father Theobald Mathew, and Commodore John Barry.

CGS Vice President Mike Miluski recalled walking onto the site in August 2016 and recognizing the challenges ahead.

“The fountain was in pretty bad shape,” he said.

The City of Philadelphia's RFP called attention to three “high priority structural areas.” It was noted that Moses, Father Mathew and the steps surrounding the fountain had been documented as public hazards. The long-term effects of water infiltration had set in, eroding mortar joints and causing some stones to jut out. Furthermore, the stone base supporting the 16-ton Moses statue was in danger of collapsing. The Father Matthew statue had been struck by lightning in 1910 and repaired with an iron and metal pin anchor system, which had succumbed to corrosion. The city considered it the most threatened of the statues.

CGS had two goals. One was to inject grout beneath the Moses statue's stone base. The second was to pump grout into various points to support the granite steps surrounding the marble fountain and four satellite statues.

“Natural disasters and bad contractors keep us in business,” Miluski said. The damage he saw at the fountain during an initial site visit was based on the age of the monument, and also on the hodgepodge of materials that had been used for its foundation.

The monument's location in the center of a traffic circle further complicated matters. It was obvious to CGS that the fountain had been damaged by errant vehicles. There were, in fact, several such incidents during the repairs, which prompted the erection of jersey barriers around the perimeter.

The gist of the project as CGS understood it was to fill the void spaces in the statue to stop settlement and rehabilitate the affected structures. The firm could think of no better solution than injecting a high-mobility grout under low pressure — 25 psi or less to be exact.

High mobility grouting requires the pumping of a low viscosity grout from the injection point through a spider web of interconnected voids. CGS was confident this would not only eliminate the voids in the rubble fill, but also prevent future raveling of the subbase material. Raveling occurs when running water carries soil particles down through voids into underlying cavities.

High mobility grouting is a specialty. The City of Philadelphia was seeking a grouting contractor with at least five years of experience. CGS was ultimately recommended to Materials Conservation by a local engineering firm as a local contractor that fit the bill.

Miluski acknowledged that CGS's background with similar projects was key. He also believes that the firm's ability to approach projects with an engineering mindset was important. This was exactly what led the firm to be selected while delivering added value to the owner by suggesting an economical alternative to the specified pre-blended high-strength grout.

The CGS crew worked closely with the masonry contractor since their respective scopes were closely interwoven. Daily logistical coordination was required for tasks such as moving and resetting stones; pointing stone joints; coordinating access to the scaffolding; providing access for grouting ports; and protecting the fountain throughout the restoration.

Making sure grouting ports were available was key to avoiding downtime. CGS worked continuously with the mason to coordinate their installation. The mason also would have to point the stone joints prior to CGS injecting grout into Moses' stone base.

“This project might not have gotten done if the pricing had been based on the specified bagged cement,” said Miluski. “The cost would've been three times the amount of our mix.”

The specified bagged cement-based grout mix would have incurred $95,000 in material costs alone. CGS proposed mixing its own grout on site at a price of roughly $57,000, which reflected its entire project cost.

This saved the customer money and material since multiple leftover bags would have gone to waste. The added benefits were higher strength, increased water resistance and higher adhesion.

“We were able to get the desired grout characteristics with our knowledge of cement materials and the project goals.” said Miluski. “We put silica fume and a boatload of water reducer in the mix and we had higher strength than the Sika product [3,000 PSI at one day and 6,500 PSI at 28 days]. We were at 9,000 psi in 28 days.”

“It was a lot less risky not using a bag mix,” Miluski said. “Using the silica fume and cement meant there was no waste other than what was left in the hopper.”

Mixing and Injecting the Grout

CGS relied on its ChemGrout CG-600 colloidal mixing grout plant to batch up a total of 460 cu. ft. of grout on-site at the fountain. The plant's 13-cu.-ft. colloidal mixer and agitation tank, and positive displacement piston pump allowed workers to mix material and inject it at pre-existing points. A telehandler was used to deliver cement pallets to the CG-600 to keep the grout flowing. Much like concrete, the grout had to be injected immediately after it was mixed.

At the other end of the hoses were CGS workers at ground level and on scaffolding to access the towering statues. The hoses were hooked up to ¾- to 1-in. ports that had been installed in the open mortar joints. The careful location of injection ports was critical in allowing the crew to fill the voids below the structures with minimal disturbance. The mix design also was pivotal to getting the job done right.

CGS was restricted from drilling or cutting through the granite and marble so finding suitable existing openings for injection ports was key. In those areas with smaller holes, the team altered the mix design, used smaller diameter injection ports, and adjusted the flow to achieve adequate coverage with the lower strength mix. It also was important to consult with the owner and design team to make sure this revised approach was acceptable to support the restoration effort.

The locations were pre-determined; however, there were areas such as the granite blocks from the top row of stairs that had to be temporarily removed to accommodate injection ports.

“We were pushing out the blocks,” Miluski said, adding that it required the team to change the location of some ports on the fly. “We were constantly monitoring and able to react to what was happening.”

Mixing was critical to ensuring that the grout would hold up over the long haul. Miluski plays down CGS's ability to mix it to perfection, namely because his team has such deep experience with it.

“We have a lot of experience with this mix and design,” he said. “If you see a chunk in the mix you'll never reach the strength you want so you really need to know how to mix it.”

CGS had to tweak the mix to adapt to changing circumstances.

“During the project, we changed our grout mix and consistencies to better suit on-site conditions,” Miluski said. “Where grout injection access was limited and the material had to travel greater distances, the grout was made more mobile by removing the silica fume and still adding water reducer.”

The CGS crew pumped the grout until the joint would no longer accept flow without increasing the pressure. The crew had to stay aware of changing conditions and respond as needed. This meant observing the joint for moisture and watching for unwanted structural movement. The finished joints were then plugged with oakum, burlap and a stick.

The historic nature of the fountain required CGS to exercise extreme caution to prevent damage, according to Miluski.

“The hardest thing was using the PVC pipe and not getting the primer or glue on anything,” he said. “We had to be really careful not to get any of it on the statue.”

Despite the complexity of the process, CGS was only on-site for two weeks during August, October and November of 2016.

“We were on schedule and they fit us into their windows,” Miluski said. “Logistically it was great to work with them.”

Perhaps even more fascinating is the fact that CGS helped to correct problems that unfolded over 141 years in less than 14 days. All parties are in agreement when it comes to hoping that the City of Philadelphia will not be issuing another RFP until at least 2158.