High-Tech Atlanta Stadium a Hit With Fans After Early Woes

Fans say Atlanta’s new $1.5 billion facility is living up to the hype despite a series of construction setbacks that delayed its opening. 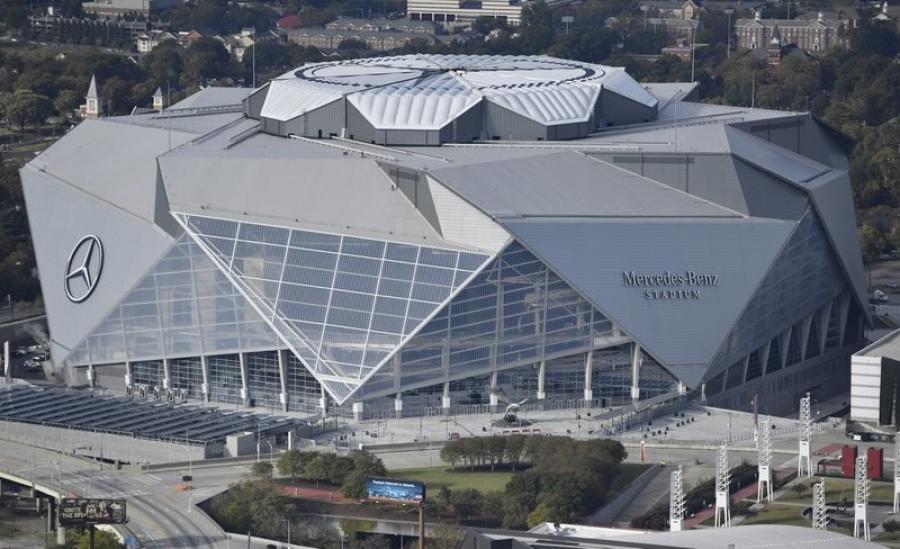 ATLANTA (AP) — Mercedes-Benz Stadium is about to be on perhaps its largest national stage — The Jan. 8 College Football Playoff title game — and fans say Atlanta's new $1.5 billion facility is living up to the hype despite a series of construction setbacks that delayed its opening.

The game at the glitzy stadium features two teams that already have played there: rivals Georgia and Alabama.

Mercedes-Benz Stadium drew record-breaking crowds for a number of major sporting events, including the Atlanta Falcons NFL games and United MLS matches. Some of music's top performers from Garth Brooks to Trisha Yearwood had a packed concert at the state-of-the-art venue.

Some fans are calling the stadium "beautiful" and a "great central location" in downtown Atlanta. The stadium is located near Centennial Olympic Park, where Grammy-winning rapper Kendrick Lamar will perform a free show during halftime.

So far, the stadium is winning attendees over despite its signature feature, the retractable roof, being opened only once during an event since the opening in August. The roof, which opens and closes like a camera lens, is one of the many attractions of the stadium including the massive 360-degree, 63,000-sq.-ft. halo video board and cheap food pricing.

"I think probably the biggest thing you take away for me was the halo board," Falcons quarterback Matt Ryan said. "Seeing that for the first time, seeing the size and scope of it, how clear the picture is, the graphics they can put on it, it's pretty special."

So special, Atlanta will host next year's Super Bowl.

The stadium will also host SEC championship football games for the next 11 years along with 2019′s Super Bowl and the NCAA men's Final Four in 2020.

Some of the milestones since it opened:

This year, Atlanta has become a hotbed for US soccer. Fans flocked to United games in record numbers. The United drew a crowd of 71,874 for their regular-season finale on Oct. 22, more than any other single game in MLS history. The team set the previous record five weeks earlier with its first 70,000-plus turnout. During the playoffs, the team also set a MLS postseason-record with 67,221. With the growing popularity of the sport, the stadium will host the MLS 2018 All-Star game in August.

The Atlanta Falcons were beat out at home by college football and Garth Brooks when it came to who drew the largest attendance at the stadium. The SEC championship football game between Auburn and Georgia in November was No. 1 (76,534). The Chick-fil-A Kickoff games had the second and third highest turnout with 76,330 (Alabama-Florida State on Sept. 2) and 75,107 (Tennessee-Georgia Tech on Sept. 4). Garth Brooks' concert was attended by 74,353 people and the Falcons drew 74,141 in a game against the Carolina Panthers on Dec. 31.

Thousands turned out for concerts just as much as the sporting events at the Mercedes-Benz stadium. In the first concert at the stadium, more than 74,300 attended the Garth Brooks and Tricia Yearwood show in mid-October. The concert was one of the top 5 draws at the facility. In 2018, the stadium is looking to host more concerts with Taylor Swift, Kenny Chesney and Ed Sheeran as headliners.

After the Falcons' former home the Georgia Dome was demolished in November, the 24-year-old stadium is being replaced with a 13-acre park. It's expected to be completed by fall this year. The multi-purpose greenspace would be used on game days as a tailgating area and parking lot for about 850 cars. The area will feature a zone that will comprise of a 3-pier, dual-level, shaded deck pavilion on event day and offer additional amenities such as picnic areas for the public on non-game days. A 35-foot high mirrored sculpture of a soccer ball that will sit by the north entrance can be viewed from the greenspace area.