Highway, Rail Upgrades in Massachusetts Could Result from Biden's Plan 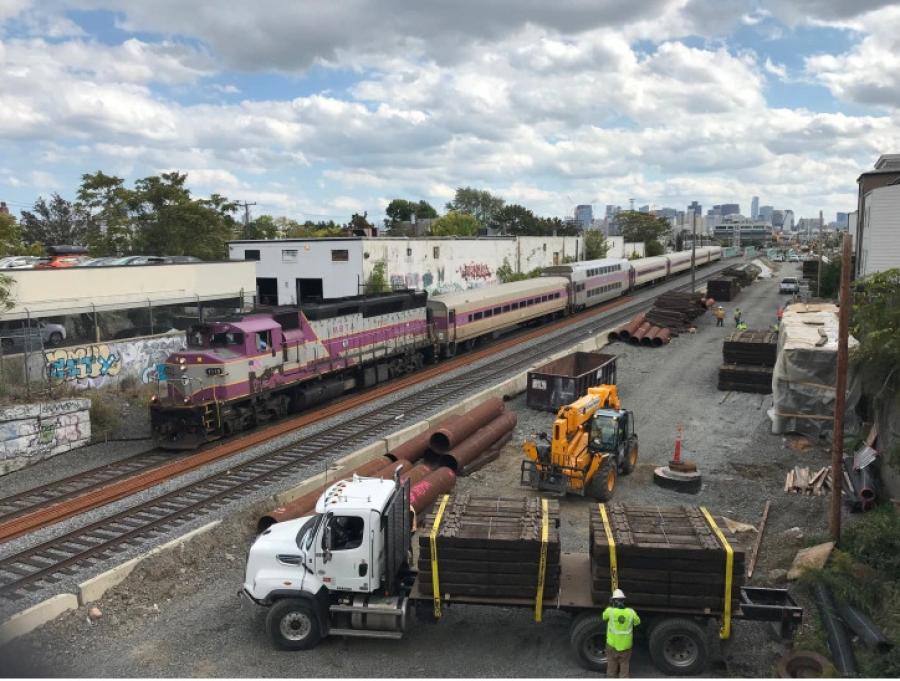 The Green Line Extension under construction next to a Lowell Line commuter rail train, seen from the Cross Street overpass in East Somerville on Oct. 1, 2020. (Mass.Streetsblog.org photo)

The plan includes more than $115 billion for roads and bridges, along with spending $85 billion for transit services and $80 billion on intercity rail.

Many details remain to be worked out through negotiations and debates in Congress, but here is a quick look at what that kind of money could buy for Massachusetts:

The White House said that it will use the funding to prioritize basic repair of existing roads and bridges, and that any road improvements will be focused on "safety, resilience and all users in mind."

In Massachusetts, highway monies are often "flexed" to finance trails and complete streets projects. The Boston Region Metropolitan Planning Organization, which disburses funds for most large transportation projects in the greater metro area, is currently updating its five-year budget, and several projects that are unlikely to make the cut in this year's round of funding could be well-positioned to see construction if new federal funds become available, according to StreetBlogs Mass.

Among those projects that could get a new life due to the Biden plan include:

Biden's proposal also would set aside $20 billion in highway funds "to improve road safety for all users, including increases to existing safety programs and a new Safe Streets for All program to fund state and local ‘vision zero' plans," according to a White House fact sheet.

There also is the possibility of a new $20 billion program that would reconnect those U.S. neighborhoods that suffered destruction from 20th-century highway projects. Locally, StreetBlogs Mass noted that has the potential to boost large projects like the proposed demolition of the obsolete McGrath Highway in Somerville, or the still-to-be-drafted design for Morrissey Boulevard on the Dorchester waterfront.

Shortly after the White House released its proposal, Amtrak issued a fact sheet and accompanying map outlining new routes and services that it could implement along the entire Northeast Corridor from Boston to Washington. In addition, the Downeaster line to Maine, the Hartford Line between Springfield and New Haven, Conn., and the Vermonter line north of Springfield also could receive "enhancements."

The Amtrak map included the much-studied East-West route, which, under the company's proposal, would be extended from Pittsfield to Albany, N.Y., as well as a new service to New Hampshire, and an extension of Vermonter service to Montreal. The latter idea has long been in the planning stages but is contingent on the construction of a new U.S.-Canada border checkpoint inside Montreal's train station.

Ben Heckscher, a co-founder of Trains in the Valley, an organization of Pioneer Valley rail advocates, told StreetBlogs Mass that running trains all the way to Albany, a metropolitan area of 1.2 million people, could add significant benefits to the proposed east-west rail service between Boston, Springfield and Pittsfield.

"At some level, the wild card here is still [the Massachusetts Department of Transportation]," he said. "They've never been very excited, from our perspective, about getting east-west rail implemented."

That would represent a major increase in federal investment – more than 40 times what the federal government budgeted last year to help transit agencies finance their expansions.

As far as providing the funds for the electrification of transit rail lines, much of Biden's proposed $174 billion in spending for electric vehicles will go toward electric car subsidies. However, a sizable chunk of the White House's proposed electric vehicle funding also would go to transit agencies to help electrify public vehicles.

Electrifying the commuter rail network could have profound effects on transit ridership and transportation emissions in New England, according to the MBTA's formal analysis of capital improvements to the commuter rail system, noted StreetBlogs Mass.