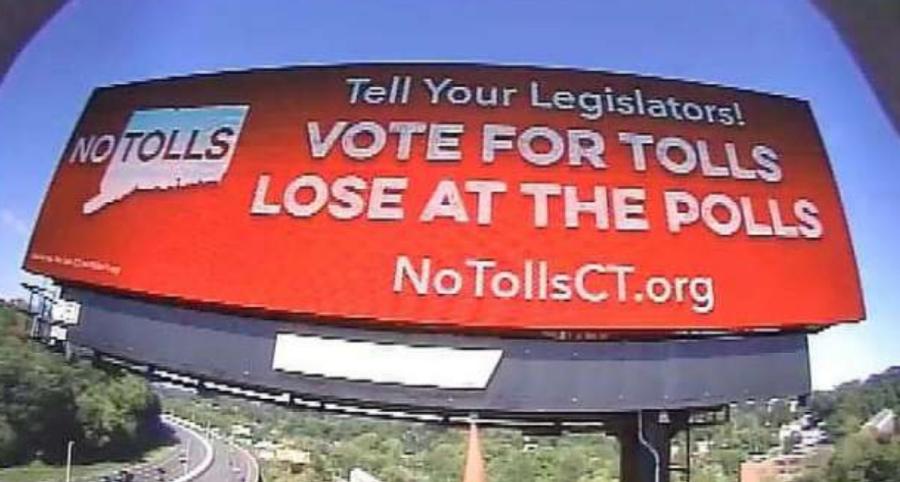 Gov. Ned Lamont is revising his approach to transportation while "No Tolls CT," a grassroots opposition group, is purchasing billboard space to make sure the governor's new plan doesn't include electronic tolls.

The billboards, which went up after Labor Day on I-91, I-84, and I-95, are supposed to remind lawmakers of Connecticut residents' continued opposition to tolls and to encourage the public to contact their lawmakers.

"2020 is an election year," Patrick Sasser, founder of No Tolls CT, said. "Do these politicians really want a vote for tolls hanging over their heads?"

Sasser declined to say how much the group spent on the billboards, but was certain it was far less than the construction trades and unions.

The week before, the Connecticut State Building Trades Council and officers of the Connecticut AFL-CIO sent Democratic lawmakers a letter urging them to pass legislation to implement electronic tolling as quickly as possible.

They said electronic tolls will raise $800 million for the Special Transportation Fund and 40 percent of that will come from out-of-state drivers who use the state's highways but currently pay nothing for maintenance and repairs.

The General Assembly failed to approve reinstalling tolls on Connecticut's highways before adjourning in June. Lamont had pitched 50 gantries on four highways to raise the $800 million, but it was too much to stomach for Republicans and many Democrats.

Lamont's last-ditch effort to convince lawmakers came in June when he proposed an income tax credit for individuals and families making less than $145,000 a year.

The tax credit was between $90 for single filers and $180 for couples. It would cost the state about $100 million in revenue every year and would be in addition to a frequent user credit of 20 percent. That's in addition to the 30 percent in-state EZ-Pass discount for Connecticut residents.

The starting rate would be 4.4 cents per mile during peak periods and 3.5 cents during off-peak periods.

But those proposals have been put on the backburner as Lamont seeks to reboot his effort.

"The governor recognized the discussions in the spring were not helpful," Max Reiss, Lamont's communications director, said.

Reiss said they are looking for solutions and they believe the federal government will be helpful in finding them.

Lamont administration Chief of Staff Ryan Drajewicz recently traveled to Washington to meet with officials from the U.S. Transportation Department.

The new strategy will include maximizing federal money and it might include some tolls, but it won't be 50 gantries, according to Reiss.

"The governor is trying to provide a vision for the future," Reiss added.

Senate Republican leader Len Fasano said he can't say what he thinks of the new approach until he sees a plan.

"But I am very glad to hear that the governor's plan for 50 toll gantries is off the table," Fasano said. "It speaks to the power of people's voices who have spoken out loud and clear. It makes a lot of sense to explore leveraging federal dollars through TIFIA and RRIF. I am glad the governor has come around to look at other options."