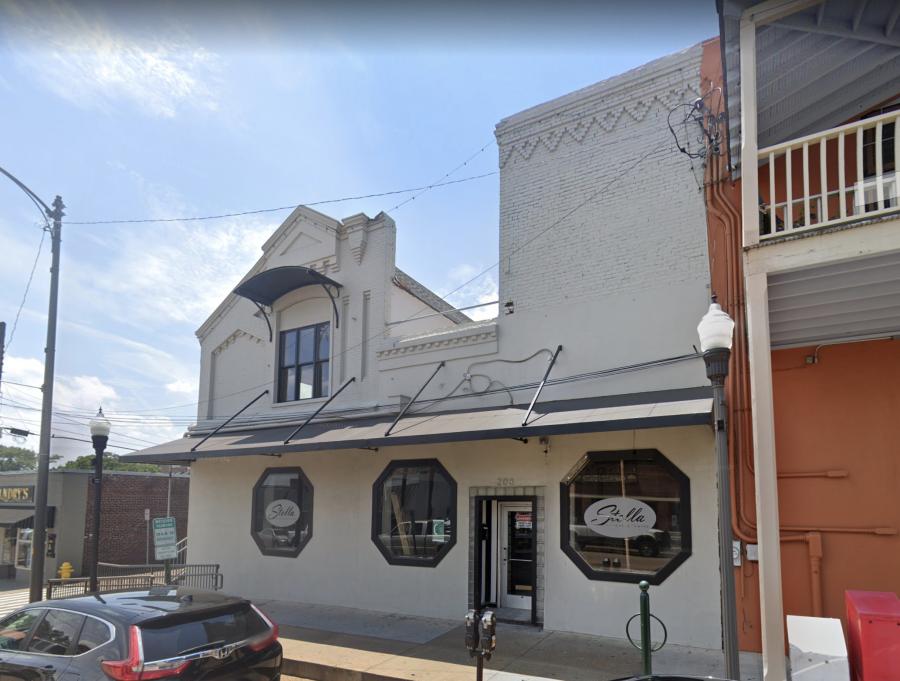 The 19th-century building at 208 S. Lamar Blvd. in Oxford, Miss., when it operated as a restaurant.

When Tim Smith bought a run-down building on the Oxford city square, he planned to tear it down to make way for a new restaurant. The Courthouse Square Preservation Commission denied permission to demolish the nineteenth-century structure, however, forcing Smith to alter his plans. The Commission would allow only a couple of exterior walls to be torn down; they insisted on preserving the façade of the building, according to Chris Carter, Oxford's building inspector.

Smith brought in a structural engineer to create a design to support the building. They discovered that the building had shifted since its original construction in the 1880s, and that subsequent repairs included grouting underneath it to "shore it up," Carter explained. They also learned that the load-bearing wall that supported roof and ceiling loads had floor joists and ceiling beams embedded in the brick.

But disaster struck when crews tried to drill through the solid double-layer brick façade in order to place bolts for stabilization purposes. "The wall had plaster over the bricks," Carter said. "As they drilled, it disintegrated. Big chunks of bricks came loose. The structure had no integrity. It was a mess."

At that point, they contacted Carter, who, after inspecting the building, declared it unsafe. He immediately blocked off the street and the sidewalk on the west side of the building to prevent injuries.

An emergency meeting of the Courthouse Square Preservation Commission was called, at which a unanimous decision was made to approve a Certificate of Appropriateness to demolish the building in the name of safety. This decision resulted from Carter expressing his belief that the building would collapse at some point should the remodeling project continue, or even if it was left untouched.

"The owner spent a lot of money on bracing and shoring," Carter stated. "He tried to do the right thing." Nevertheless, after seeing how the bricks "fell out from the vibration caused by drilling a hole," he believes everyone "dodged a bullet" and says that if the rehab had proceeded as planned, he's not sure it would have been approved in the end.

According to news reports, it was structural engineer Chad Fowler's suggestion to the Commission that the demolition should be done "brick by brick," starting at the top and working down in order to ensure the integrity of the surrounding structures.

"Due to the proximity of the building to the sidewalk and the road, it's best to take it down brick by brick," Carter added. "It's slow, but it's the safest manner." The first floor has to be stabilized before any demo can begin, he also noted.

This old-fashioned process doesn't require any specialized contractor. Carter indicated that locally-based Capomazza Construction LLC, the contractor hired to perform the remodel, will now shift gears to perform the demolition.

Carter requested that the Board of Aldermen allow Capomazza's crew to work extended hours in order to complete the demolition quickly to prevent any issues from the decaying structure.

After the building's demo, Carter said Smith will have to go through the usual site plan approval process, but with one difference. "Usually, we need to see the plan and renderings for the new building before the old one is torn down," he said. "But that requirement was waived due to the emergency situation."

Smith will be allowed to seek informal feedback from the Committee before drawing up plans to submit for approval.

Carter said it's his understanding that Smith still wants to build a restaurant on the lucrative town square. "It was a restaurant as long as I remember," he recalled. "It was a café called Smitty's. Everyone used to have coffee there."

The former Smitty's had undergone a remodel 12-15 years ago, with limited expansion that created a second-floor apartment. Carter said Smith intended to turn that into part of the restaurant. The second floor and balcony was scheduled to become a rum-themed bar, with a New Orleans-style po'boy restaurant on the main floor.

For now, Carter said, the historic restaurant and its journey from demo to reno back to demo is the talk of the town. CEG