Hoffman Equips the World With Iron 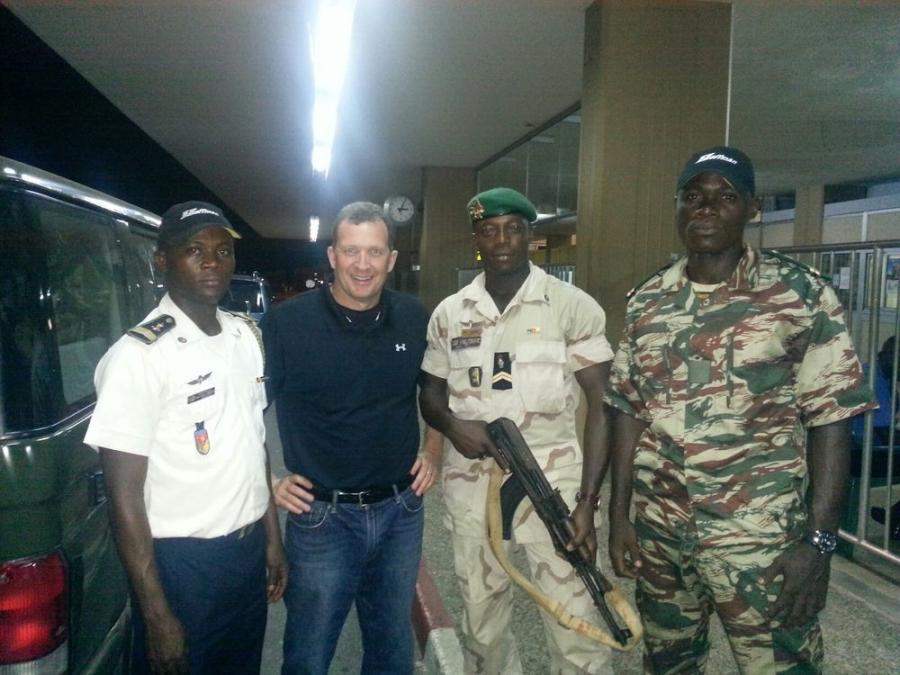 One of Hoffman’s biggest ever export deals delivered 170 pieces of equipment to the Cameroon Corps of Engineers. Here, Hoffman president, Tim Watters, is being escorted to a construction site by a Corps of Engineers guard detail. Note the honorary Hoffman employee status evidenced by their hats.

The international market for American-made heavy construction equipment was particularly strong in the 1980s and '90s and Hoffman Equipment contributed to its strength.

The company took international contacts established from its days stevedoring in New Jersey ocean ports, paired them with relationships at domestic equipment manufacturers and forged multi-million-dollar deals in places like Colombia, Russia and Egypt.

Musya Tamanyan helped grow and sustain that market for Hoffman. Hoffman's vice president for international sales came to the company 31 years ago. She was then a multi-lingual immigrant from the USSR (specifically from Moldova, now an independent country) with an advanced degree in international trade earned in New York City. Hired by Hoffman Equipment in 1985, she immediately set her sights on foreign deal-making.

One of her most recent transactions was a $45 million sale of equipment to the government of Cameroon. She is working to conclude another $83 million transaction in that same country. Prior, and over the years, she has negotiated deals in Russia — a border away from her native country — Kazakhstan, Egypt, China and numerous other nations. Throughout her time at Hoffman, global deals have accounted for about 20 percent of annual sales.

But the outlook for continued success abroad is cloudy. While foreign sales remain a major component of Hoffman Equipment's business plan — for example, the company exports machinery parts to about 25 countries — the infrastructure of global sales has changed.

"The overseas distribution structure in the '80s and '90s was not anywhere near what it is today," said company President Tim Watters. "Then, it was easier for a company like us to sell American-built products overseas. Over the years, however, most manufacturers have developed their own distribution networks throughout the world, squeezing out intermediaries like ourselves. Only in Africa is there still a lack of strong distribution networks, so that remains kind of a niche market for us."

"We're not going to give up on global sales. In the next five to 10 years, exports will remain a nice piece of our total sales. We're optimistic that we will do business in Africa over the next five years, maybe longer. We're very upbeat about that."

There are other headwinds for global trade. Watters is exasperated by the inability of Congress to reliably support the Export-Import Bank. Senators are at odds over the effectiveness of the government agency. For years, senators couldn't even agree on appointments to the trade-finance agency's governing board, thereby limiting its function.

Though the trade wars going on under the Trump administration are worrisome, Hoffman's chief financial officer, Eric Shumaker, said so far they have had a huge impact on overseas sales. He worried some about the effect of steel tariffs on equipment prices, for example, but it proved negligible. The China-U.S. back-and-forth on trade also appears not to have influenced Hoffman's bottom line, but the lack of an EXIM Bank has been terrible for Hoffman. It has hurt us alot."

Despite such concerns, Tumanyan continues to believe in the market for American-made products.

"I have been told what customers see in us and in buying our equipment — a reliable, long-term return on their investment. They know it can be cheaper to buy equipment from other countries, but the quality is here, the quality of steel and the quality of the machinery."

She specifically sees an ongoing market for road maintenance equipment, perhaps especially in the African market.

"In all emerging economies, infrastructure is the key to the well-being of a country's economy. Good and safe roads and clean water for people in rural areas. They rely on our equipment to do that."

For years, Tumanyan taught international business classes at New Jersey's Monmouth University. She said she stressed a simple mantra with her students: Learn a market and listen to the people. They will tell you what they need and how you can help them get it.

Because Hoffman Equipment essentially follows that maxim, Tumanyan has confidence in the future of the company. She said Hoffman is now and always has been comprised of good products and good people who listen to customers.

"I worked with Tim's father and now with Tim. He is a good manager with good targets that enhance our ability to compete in the market."