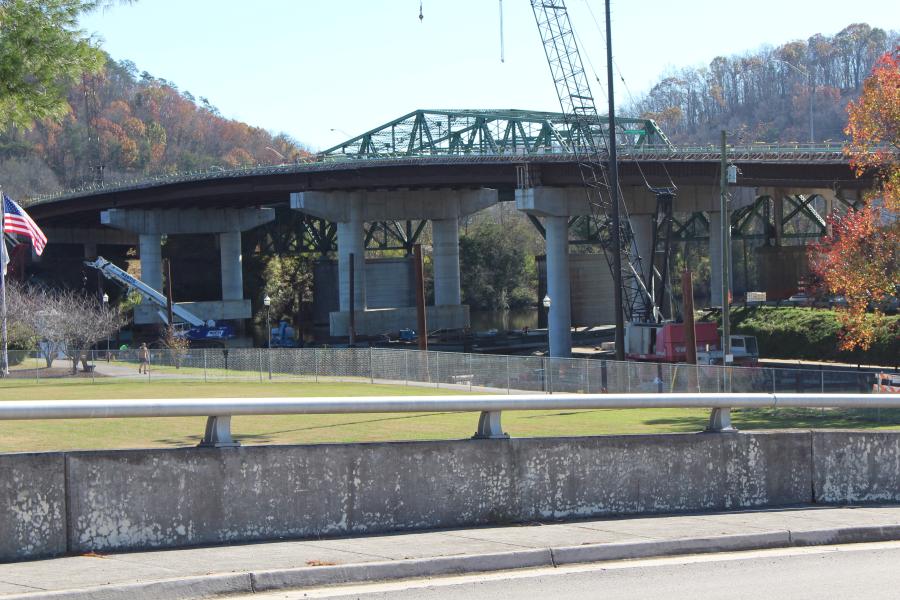 Blalock began excavating for footings for the new bridge in late 2018. The foundation pilings — steel beams — are driven down 20 to 30 ft. until they reach bedrock. The steel beam pilings are wrapped with rebar; concrete forms were placed; and concrete was poured to create the abutment.

Clinton, Tenn., is getting a new bridge. Rather than replace the existing, aging truss bridge, Mark Nagi, Tennessee Department of Transportation community relations officer of Region 1 in eastern Tennessee, said "replacement was the preferred alternative to a restoration [or] repair for the crossing," in part because this option imposes a less significant impact on the motoring public, but also because a new bridge will enjoy a longer service life than a restored older bridge.

Known officially as the Hon. William Everette Lewallen Memorial Bridge, or "the green bridge," as locals call it, the bridge spans the Clinch River and connects downtown Clinton to South Clinton and Knoxville beyond. Still considered safe by TDOT, the bridge is aging and "due for replacement," according to the state. A replacement bridge will avert anxieties about the integrity of the bridge.

Charles Blalock and Sons Inc., based in Sevierville, Tenn., won the bid at $27,735,269.72. Blalock is an 80-year-old family business that began as a lumber company with a portable sawmill and later added a concrete plant. When his sons joined the company in the 1960s-70s, they added road construction and expanded to include an asphalt division, concrete structures division and a utilities division. The different companies under the Blalock banner began selling ready-mix concrete and concrete block, and building materials and hardware to local contractors. 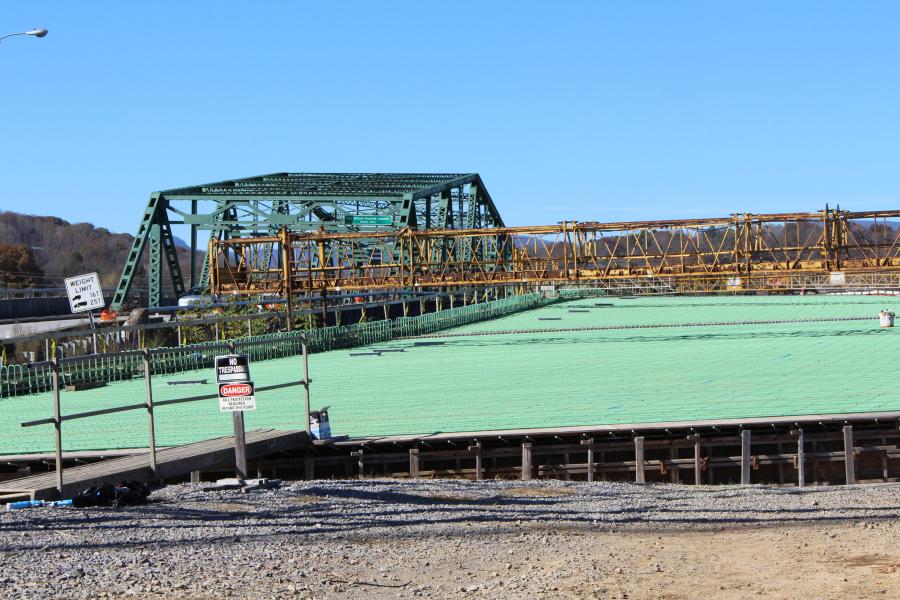 Today, Blalock is a leader in commercial and residential site prep from initial clearing and grading to final paving. In addition to site excavation and utility work, it does highway and bridge construction, asphalt paving, concrete and precast construction and more. Often winning TDOT bids, it completed the largest highway contract ever awarded in Tennessee, SmartFix40.

"This project includes the grading and drainage of SR-9 and Riverside Drive," Nagi said. It also involves water, gas and sewer utility relocations; replacement of the existing bridge over the Clinch River with a new bridge; and demolition of the existing structure.

The new bridge will consist of seven spans, for a total length of 1,136 ft.

Nagi said, "Six of the seven spans will be 66-inch steel girders, and the remaining span will utilize pre-stressed concrete beams."

In total, eight structures are being built: an abutment at each end, with six piers between them.

The project started in September 2018 after a brief delay while TDOT struggled to obtain the necessary permits from the Tennessee Valley Authority and the Coast Guard that would allow the work to begin. Nagi said the project is expected to be completed late fall 2021.

The 36-month project will see the Lewallen Bridge's replacement constructed right next to it for minimal interruption of traffic, according to The Oak Ridger. 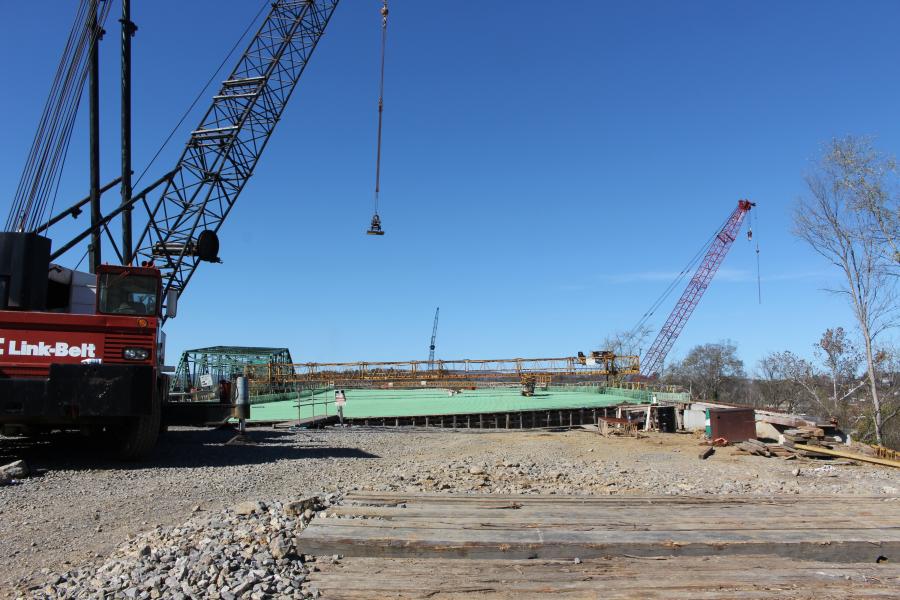 After clearing right of way of brush, Blalock began excavating for footings for the new bridge in late 2018. The foundation pilings — steel beams — are driven down 20-30 ft. until they reach bedrock. The steel beam pilings are wrapped with rebar; concrete forms were placed; and concrete was poured to create the abutment.

It takes about one week to drill each column hole, build the rebar steel cage insert and pour the concrete. A large-diameter steel casing will sit on a shoulder 2.5 ft. into the bedrock. A drill bit turns inside the steel casing to create a hole 9 ft. wide by 25 ft. deep into bedrock. The steel rebar cage will be inserted and concrete poured to create the column, which is tested to ensure it meets TDOT specifications. Once testing is done, crews will extend the columns upward by building forms and connecting steel reinforcement.

Piers 2 and 3 each have one underwater column located in the river inlet beside the concrete walking trail.

Piers 4 and 5 are entirely in the river, each supported by twin underwater support columns.

The bridge is designed with a composite concrete deck, Nagi continued.

Rebar-reinforced concrete columns are placed on top of the foundation pilings. A concrete cap is then poured across the exposed tops of the steel beam pilings to bear the weight of the steel girder beams.

Each span between piers will have nine girder beams that sit on top of the structures. The longest span is 190 ft. and stretches over the river channel between piers 4 and 5, which will rest on twin columns in the water. According to TDOT, installation is technical and labor-intensive, requiring several months to complete. The first girder beam installed weighed 52,000 lbs. The project requires 72 of them. 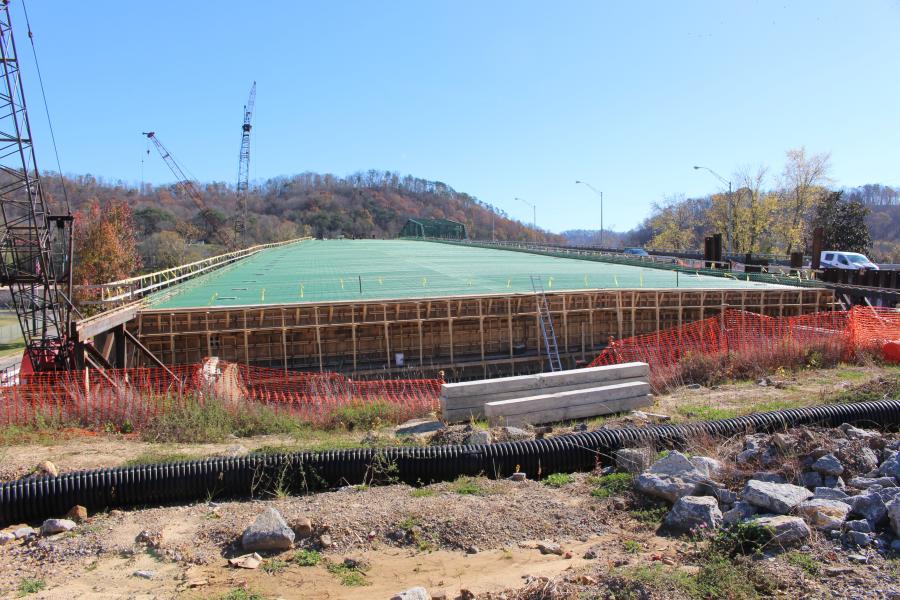 Once all the girder beams have been placed, crews will begin installing bridge decking and reinforcement steel across them in preparation for concrete pours. A sub-contractor will place a grid system of epoxy-coated steel rebar (weighing 1.5 million lbs.) across the girder beams and deck pans.

Galvanized steel deck pans on the girder beams and building overhangs that accommodate 5-ft. sidewalks on both sides serve as permanent concrete forms for a 9-in.-thick concrete slab to be poured over the deck pans. An engineered sequence of concrete pours will create the deck slab, which will become the driving surface. Approximately 3,400 cu. yds. of concrete will be pumped to create it. The bridge deck length is 1,136 ft. long.

While the pilings are going up, sanitary sewer pipe and water line and natural gas line are being relocated below the existing bridge because they created a conflict with the proposed structures.

While Nagi said there haven't been any challenges he considered "unusual to bridge construction," in December 2019 heavy rain produced a slide near the proposed location of abutment 1, which required crews to stabilize the site. More than 50 soil anchors, each 50 ft. long, were horizontally drilled through a retaining wall and secured with concrete grout. 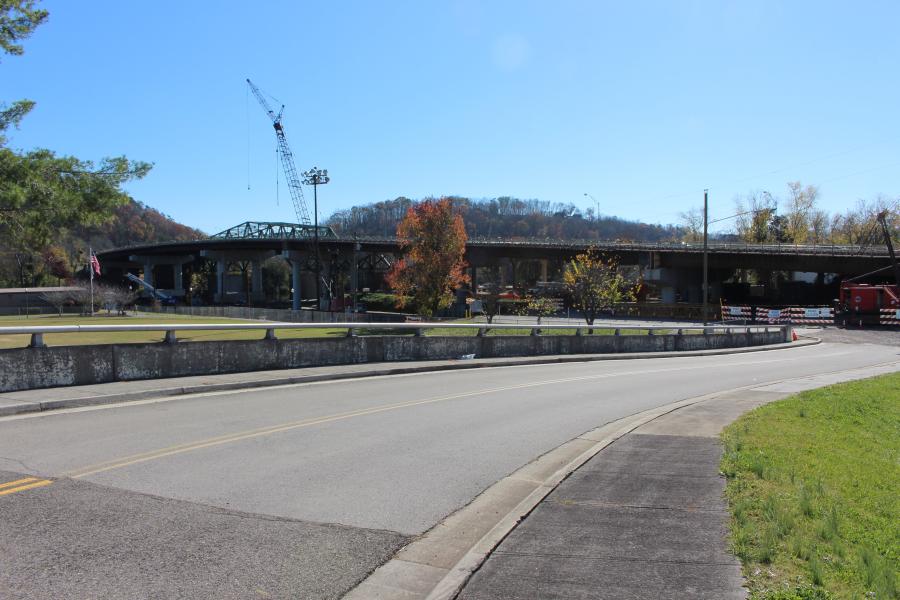 Clinch Avenue in Clinton also required repairs after heavy rains in November caused the road bed to fail in the northbound lanes just north of the Lewallen Bridge, according to the Clinton Police Department.

In June 2020, after several months of delays, abutment 1 saw precast concrete sections installed around the existing steel beam pilings to create the structure. Using precast materials was chosen because it's faster than building forms, pouring concrete and removing the forms.

Because the new bridge does not feature steel trusses exposed over the road surface like the old bridge did, there's no need for a protective coating of paint. The steel girder support beams will be visible only from beneath the bridge and feature a "weathered steel" surface designed to oxidize to a predetermined depth, forming a protective rust surface coating that eliminates the need for painting — and long-term maintenance that includes sandblasting and repainting.

The driving surface, sidewalks and parapet walls will all have a concrete finish, but as a nod to the old bridge, the 38 LED light fixtures and poles will be painted green. Lighting and bike lanes were requested by the city.

Blalock estimates that traffic will begin crossing the new bridge in spring 2021. CEG