The modernization project is expected to be ongoing through 2021. 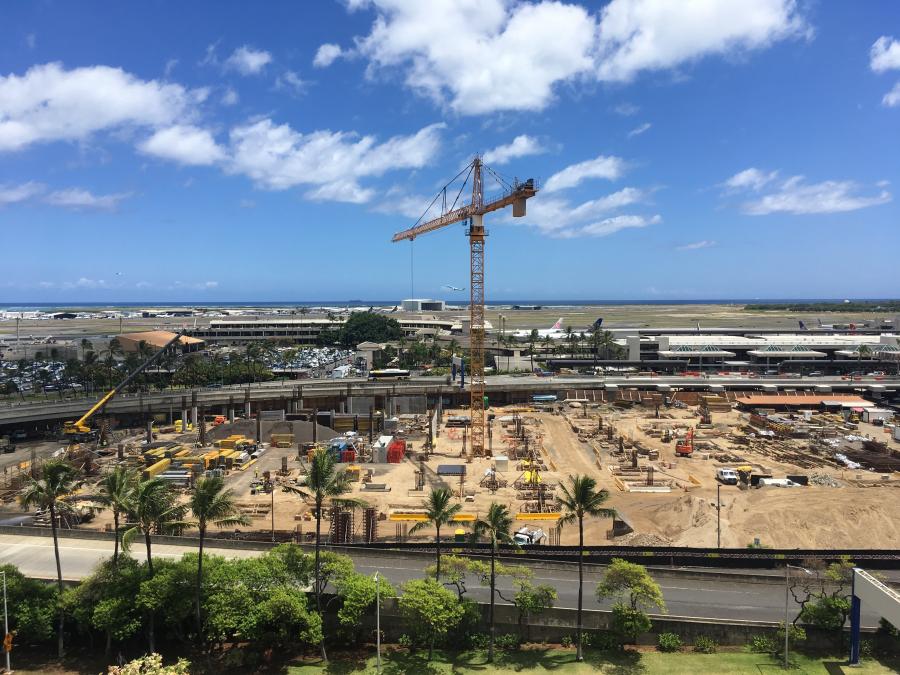 Hawaii's largest and most active airport was recently given a new name — an apt change, perhaps, to go along with the $2.7 billion modernization project that also will undoubtedly give it a new look. The former Honolulu International Airport was rechristened earlier this year the Daniel K. Inouye International Airport as construction work continues on several major projects throughout the terminal.

The project, as described on a website dedicated to the Hawaii Airports Modernization Program, “… consists of a multi-year effort to transform HNL into a distinctive, functional airport, worthy of a first-class visitor destination and to meet the growing needs of residents and visitors alike.”

The major components include a new concourse, terminal and car rental facility.”

“The challenge is we are landlocked,” said Ford Fuchigami, director of transportation for the Hawaii Department of Transportation. “There is no room to do expansion. Everything needs to be sequenced and needs to be sequenced very carefully. We can't afford to shut down gates. We have to do the operation keeping in mind the 18 million passengers a year enplaning and deplaning while doing all these different projects. That's one of our major challenges. The unique thing about the Honolulu airport is we have three different concourses. Diamond Head, on the east; central, which is right in the middle and Eba, located on the west side. Those are three different areas where people flow through and we try to coordinate that so we have equal passenger flow.”

Work is under way on the new $240 million, LEED Silver-certified Mauka Concourse. It will give HNL additional gate capacity during peak hours as well as new gates capable of handling larger widebody aircraft such as the Airbus A-350.

“It will be the first major concourse expansion at Daniel K. Inouye International Airport in almost 20 years,” Fuchigami said.

The Airbus A-350, operated by Nippon (Ana) Airways, also will require the construction of a third loading bridge, which also will mean renovations to existing loading bridges and significant runway work.

According to the website, “The L-shaped concourse will be connected to the Interisland Terminal and will include new aircraft gates, passenger holding rooms, security screening lanes, jet bridges, and public amenities, such as concessions, restrooms, and information kiosks.

“It is five stories and will house five of the car rental families,” Fuchigami said. “It has a quick turn-around area, car wash and parking stalls for cars being stored.”

Much of the work on the tall structure is being handled by large cranes.

“You also have backhoes and dozers, but we see a lot of cranes, big cranes,” Fuchigami said. “The cranes are necessary to drive the piles into the ground and for lifting certain slabs to certain floors. It's a five-story building and a matter of getting things from point a to point b.”

The rental facility is set for completion in 2020.

There also is a $70 million renovation project in the concessionaire area.

“It's been a huge upgrade to the appearance of the airport,” Fuchigami said. “We were able to get the concessionaires to fund it. It is on the second level and they cantilevered it over the first floor to create another 10,000 square feet. We're very proud of that.”

The modernization project has come under some criticism for taking too long to complete, with some components under way for more than a decade. The criticism helped spark a move to pass the airport corporation bill, which would have moved the project out of the state's hands and put it under the direction of an independent board.

The bill, SB658, however, did not survive the legislative session.

“An airport corporation would have added efficiency and reduced redundancy, which would have helped construction projects finish faster,” said Fuchigami. “Airport management does not have control over the decision making that would deliver first class airports. Without systematic changes the public should not expect significant changes at our airports. That said, we will continue to manage with the resources we have available for the 34 million passengers who fly to and from Hawaii's 15 airports each year. We thank Attorney General Doug Chin for working with us and we will continue to work with the Legislature to address any concerns on the issue. We will not give up on making a difference.”

Chin commended Fuchigami for “thinking outside the box” in trying to solve the airport related issues.

“Taking the State out of airport management is a complex idea with a variety of factors. It is not uncommon for huge changes like this to take time before gaining final approval,” said Chin.

The modernization project is expected to be ongoing through 2021.