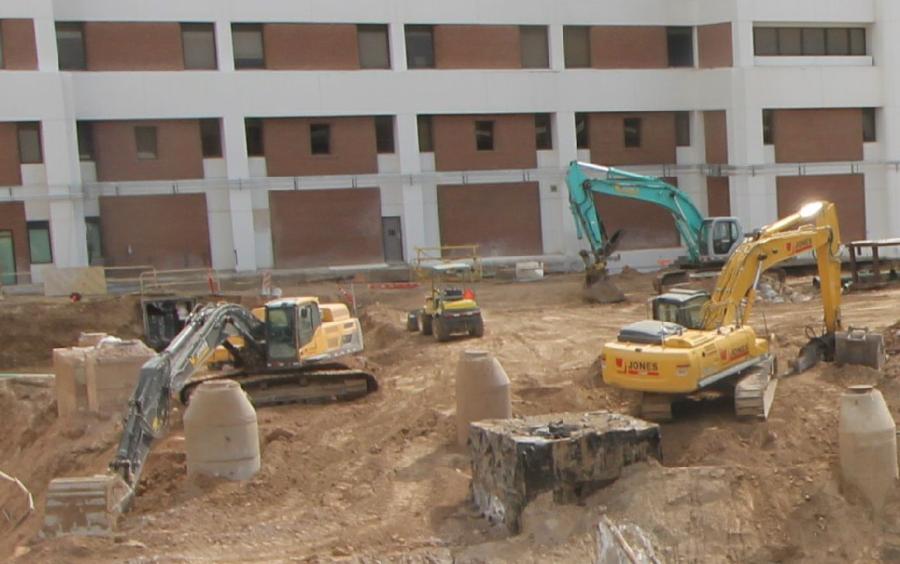 The $131.5 million center is the jumping off point of the University of Utah Health Campus Transformation project.

As work began on the new Ambulatory Care Center (ACC) at the University of Utah Hospital, crews faced two big challenges. One, all the utilities had to be moved, and two, the new center is being built on a site with not an iota of extra space.

“We're not building on a green site,” said William Holt, project manager. “We are building on the tightest spot on campus.”

The $131.5 million center is the jumping off point of the University of Utah Health Campus Transformation project. In preparation for the new construction activities, the university moved an estimated 250 to 300 employees off site and created shell space in other facilities for them, Holt said.

“The project aims to advance clinical training, scientific discovery, and delivery of patient-centered care,” according to a press release from the University. “The ACC will expand both inpatient and outpatient capacity — supporting 100,000 new outpatient visits per year. The 305,000-sq.-ft. facility also will improve efficiency of care, decreasing patient wait times and travel distances while providing smooth care transitions.”

Workers have spent the better part of the past year working out the relocation of the utilities, including, high voltage, high temperature water lines, sanitary sewer, major data and fiber feeds and even the grease traps and lines from the cafeteria.

“We relocated all of the utilities to a new tunnel,” Holt said. “That has been a major process, very disruptive, and all while keeping the major academics functional, and keeping it safe for patients. There could be no power interruptions. The tunnel they built is a fabulous tunnel. All the utilities will be in one place. If there is problem we will know where to go.”

The next challenge is dealing with the tight space.

“We refer to it as a zero lay down building,” said Blake Court, vice-president of Jacobson Construction, the lead contractor on the job. “There just isn't any room for material staging or storage. Everything that gets delivered has to be immediately put in place. It's a very tight schedule along with a very tight site. We utilize a lot of just-in-time deliveries.”

The exterior of the building is a combination of curtain wall glass, metal panel and a base course of brick. There are two stories underground and six stories above ground, along with the so-called penthouse, which isn't quite as luxurious as it may sound.

“The penthouse is for all the mechanical equipment,” Court said. “We just refer to it as the penthouse. We have successfully gotten all the utilities out of our way and completed the tunnel and completed the first set of putting in the foundation. We've got another two years to actually build the building.

“Heavy equipment on the site includes front end loaders, backhoes and a lot of dump trucks for hauling dirt in and hauling dirt out,” Court said. “We'll be doing that for two months. We also have a mobile crane and fork lifts. We'll be putting in a tower crane in another month. That one will be eight stories tall and will be on site for the duration of the job, about 18 months.

Part of the transformation project also includes some demolition. Crews have already demolished the boiler plant. When they complete the ACC project and a second new facility for rehabilitation medicine, they will demolish the old School of Medicine and a third new building, the Medical Education and Discovery Complex will be built on that site.

“The School of Medicine is 15 years old and there are some seismic issues,” said Holt. “It's 650,000 square feet of space used for everything — inpatient, clinical, research, academic faculty offices, diagnostic. It's massive. In order to take the building down, we are going through the process of identifying critical processes that need to stay on site. We are winnowing it down to this: what are the key elements we need to function? A lot of those are being moved into Ambulatory Care Complex. As we've gone through designing, it has really grown.”

The Ambulatory Care Complex is expected to open in two phases in 2019. Work on the rehabilitation facility is set to begin this fall with completion also scheduled for mid 2019.

“The University of Utah Health trains 1,250 physicians, nurses, pharmacists, therapists and other health care professionals annually,” according to the press release. “It is the only academic medical center in the Mountain West, and people throughout the region depend upon it for their health care. Its care and research must respond to and anticipate the changing needs of the expanding population of the state and region.”