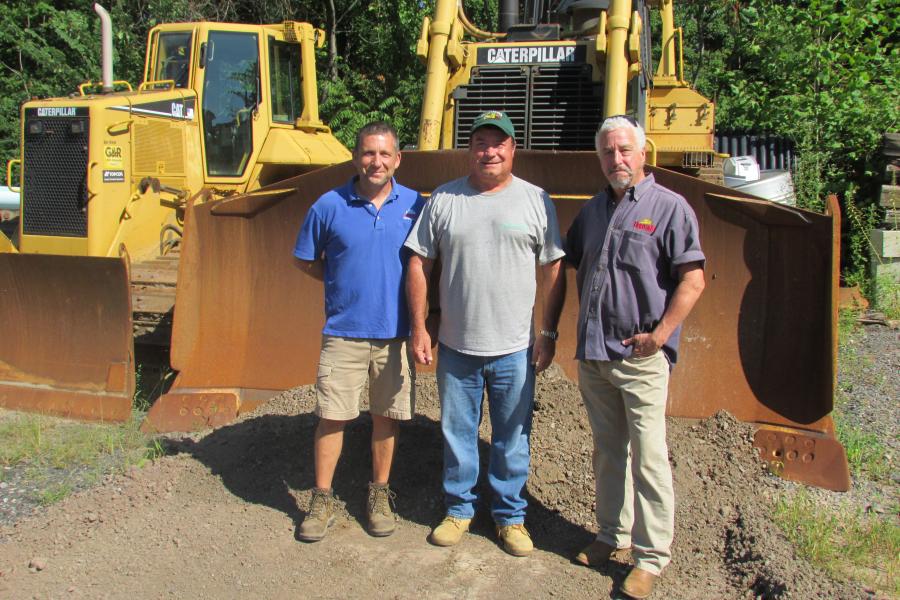 Everything has a beginning and an end.

That also holds true for construction companies that have long been a staple in their regions and are well respected for the service and production they provided.

Take, for example, McAllister Construction Co. in Washington Crossing, Pa. Founded in 1946 by Clarence "Bud" McAllister in nearby Morrisville, the company started out building homes, before evolving into one that performed earthmoving and site work.

McAllister Construction's next 70-plus years were ones of steady growth, resulting in a tremendously successful company recognized across the tri-state region of Pennsylvania, New Jersey and Delaware for offering competitive pricing, on-time production and top-quality results.

However, with the recent passing of Ed McAllister, one of the family company's two siblings that have run McAllister Construction for the past 16 years, Ed's brother, Glenn McAllister, has reluctantly decided to place his company's assets up for auction. The move will allow him and his wife to enjoy time with their grandson, do some traveling and spend time at their vacation home near Hilton Head Island, S.C.

To aid him in selling the company, McAllister has turned to Mike Hunyady, the president of Hunyady Auction Co., in Hatfield, Pa. The liquidation sale, to be done virtually, is set to start at 9 a.m., Wednesday, Sept. 28.

As one might expect, McAllister's decision is bittersweet for him, although he weighed his options carefully before realizing that the auction is the right thing to do.

"With [Ed's] passing, my eyes were opened to what the future could bring," he said. "We did not have a younger generation that we could hand the business to, so that didn't leave me with a lot of options for my leaving and keeping open McAllister Construction. I saw what happened to Ed and I want to get on with enjoying my life."

He added that his decision to use Hunyady Auction enabled him to give his crew two months to find other jobs, which, he said, they each were able to do.

A Family Business That Found Its Niche

Looking back at the company history, Glenn noted that in its earliest days, McAllister Construction did a variety of jobs, including running trucks to haul everything from steel products to S&H Green Stamps to silver coins for a New Jersey armored truck service.

But Bud McAllister also began buying construction machinery, such as a loader, dozer, backhoe and small dump truck to allow his company to work within the more lucrative realm of large-scale site work.

Glenn, too, worked with his father in the company and became adept at running various grading and earthmoving equipment, while Ed attended college to learn business principles.

"He was more the brains, and he knew all the better ways of keeping a business growing, which allowed us to form a construction company that could do major site work," said Glenn. "We progressed to the point where we bought even more equipment through the years and did site work by the hour. Part of our growth came through getting better people and operators, and by having so many great individuals working for us, we started getting bigger jobs."

With Bud's passing in 2009, the construction company was inherited by the McAllister's second generation, with Glenn serving as president of the family business.

Over the decades, McAllister Construction moved to Washington's Crossing, Pa., where it distinguished itself as one of the region's foremost complete site contractors, ready to handle a range of services — from large site construction and earthwork for housing subdivisions and golf courses, to septic system installation and emergency services. The firm's excellent reputation also extended to other parts of the state as well as throughout New Jersey and Delaware.

"The big turnover was when we started getting into golf course work back in the late 1980s," said Glenn.

By aligning itself with various golf course designers, McAllister Construction performed grading work at several courses in the region, including Jericho National in nearby New Hope, Pa., and at clubs on the Jersey shore, like Sea Oaks in Tuckerton. In addition, his crews built Greenbriar Oceanaire, a prestigious country club course and subdivision in Waretown, N.J., which involved doing all the homesite work.

"At the same point we were doing some commercial sites, with buildings up to almost about one million sq. ft., including one we just finished in Burlington, N.J.," he added.

Although the auction is not until late September, McAllister said, his construction company planned to ceased operations on or about Sept. 1.

After that, the remaining work for Glenn and his people will be getting everything ready for the sale, which he said he is excited about.

"That's because I believe I picked the right guy in Mike Hunyady," McAllister said. "I love how he has represented this and how he has sold me on this. I believe him to be a very reputable auctioneer, based on the checking I did and hearing what a few friends of mine said who themselves used his services. So far, dealing with his company has been easy and it is making me feel more comfortable about what I am doing."

Hunyady, in turn, noted that McAllister Construction had been a buyer at his auction firm in the past, while adding, "we are so proud to have them call our company" to help in liquidating the business.

"They are sold on the absolute auction method because it is the best and truest form of auctions that is produced in our country," he said. "We have a wonderful relationship with Glenn McAllister, a straightforward, hard-working, family-oriented excavating contractor."

Hunyady described his company as one with a specialty in complete liquidation, usually single seller conducted at the contractor's main facility, although McAllister's auction will be carried out online.

"And we are pleased that they saw the value [that Hunyady has] built over many years and they would use us during this time, when going out of business is as important as going into business," he said.

A week prior to Hunyady's auction of McAllister's assets, interested contractors can begin inspecting the lots, and pre-bidding will be available the same week on the auction house's Proxibid platform, accessed through a portal icon on the Hunyady website.

"Pre-bids can be placed at any time after it is launched on the platform," he said. "At 9 a.m. on auction day, you will hear our auctioneers broadcasting from our office in Hatfield [Pa.] and start to sell everything live. The pre-bids may buy, but our experience is that most equipment sells above the pre-bids during the live broadcast." 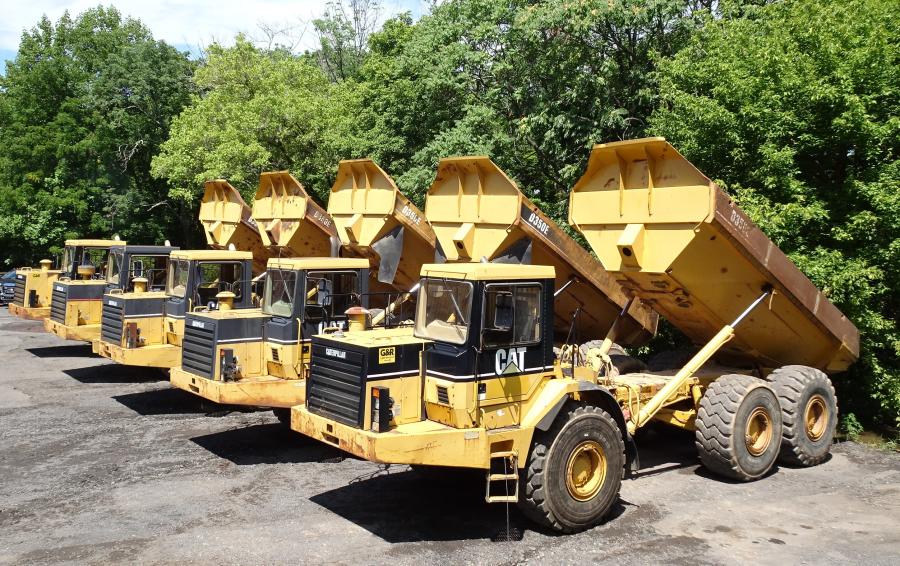 According to Hunyady, a browser search of Proxibid also can bring bidders to the site, where a prompt will direct them to the McAllister Construction auction. From there, they will be directed to where they can register for the auction and taken to the complete McAllister catalogue with all conditions set up by the auction company, along with multiple photos of every item up for bid.

A virtual auction, Hunyady said, is perfect for the bidder who wants to eliminate both the time involved in inspection, and the cost of traveling to see one or more lots, along with giving a contractor an effortless way to bid over his or her digital device.

"We find that with virtual auctions, many purchasers buy items that have not been inspected [by them personally], and that is accomplished through proper condition and description reports and major overhaul information," he said. "To a virtual auction participant, they are a huge plus. There is always a bit of a risk taken when buying used equipment, but that risk can be mitigated through faith in the construction company that maintained the equipment and faith in the auction company that has offered descriptions and conditions as a guideline for purchase."

Many contractors will continue to come on site to inspect a company's assets, something he said his auction house encourages.

Hunyady's Sept. 28 asset liquidation for McAllister also is an absolute auction where everything sells to the highest bidder — regardless of price and without any minimums or reserves.

Highlighting the McAllister Construction auction will be the company's grading and earthmoving equipment, including pieces made by Caterpillar, Komatsu and Volvo, as well as smaller machines, Hunyady said.

Among them are a Cat 349 hydraulic excavator, a late-model Bobcat track skid loader, Volvo excavators and Komatsu-manufactured rubber-tire loaders and crawler tractors.

Hunyady describes this auction as offering "a well specified and well-maintained fleet of equipment that were produced by large Tier 1 manufacturers with great reputations."

McAllister Believes He Did His Father Proud

With McAllister Construction ending, Glenn McAllister can be forgiven for having mixed emotions at this point in his life.

"It is hard being in this position after doing this work all my life and then realizing it will be done and gone," he said. "First and foremost, I am going to miss my men, just the camaraderie of working with great guys every day."

But he is proud that he and Ed kept to the philosophy of running a successful business, as taught to them by their father: A commitment to integrity, showing respect to their clients, and making sure each job is performed correctly.

"That was always instilled in us and [helped] us grow to become the company we have been all these years," he said.