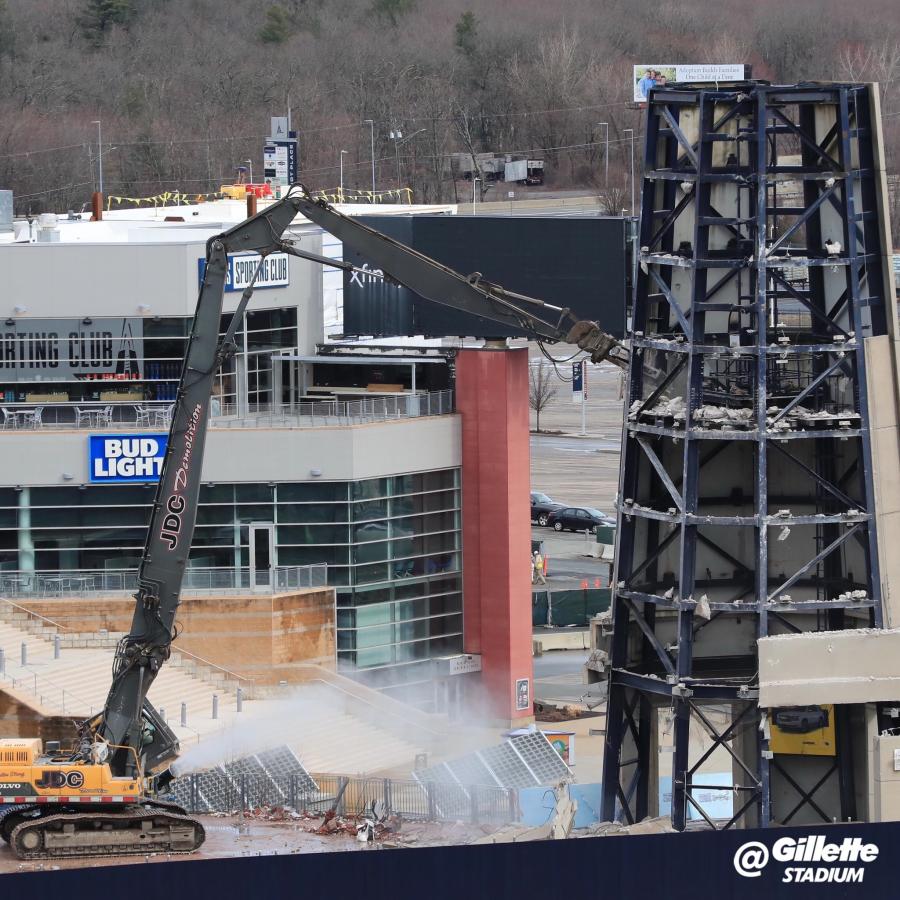 One of the iconic features of Gillette Stadium in Foxborough, Mass., home of the NFL's New England Patriots, was torn down recently as part of construction for a major renovation project at the 20-year-old venue.

The lighthouse near the north end zone, a key part of the stadium's branding, was brought sideways to the ground by a demolition crew on March 25.

The approximately 100-ft.-tall tower, however, will be replaced by a much bigger and more prominent lighthouse that is slated to be 218 ft. high. The new structure also will include a 360-degree observation deck at the top, which will be accessible year-round.

The replacement of the lighthouse is part of a massive makeover for the north end of Gillette Stadium, which began earlier in March when the video board was removed from the north end zone.

As part of the renovation, a 22,200-sq.-ft. video board — measuring 370 ft. by 60 ft. — will be installed in the north end zone. The curved-radius, high-definition video screen will be the largest outdoor stadium HD video board in the United States and will be nearly double the size of the video screen in Gillette's south end zone that was installed last summer. In addition to providing game action, the new board will show replays, statistics and fantasy football updates.

Improvement Will Make Stadium a Bowl

WCVB-TV in Boston reported that 75,000 sq. ft. of glass-enclosed, year-round hospitality and function spaces will be built in the north end of the stadium, the only open end of the venue. The new hospitality and function spaces there will bridge the gap between the East and West Putnam Clubs, the Dell Technologies Suite Levels, and the upper concourse — meaning that all levels of the arena will have 360-degree connectivity, a feature that is currently only available on the main concourse.

The fan entrance into the north end of Gillette Stadium also will be revitalized as part of the latest renovation project. Plans for this area include moving the entry gates to create a new "fan-activation area" upon entry to the lower plaza near the Patriots Hall of Fame. Once fans reach the main concourse via a landscaped staircase, they will have a view of the gridiron looking toward the south end zone video board and the Patriots' six Super Bowl championship banners.

Construction for the north end project is scheduled to be finished before the start of the 2023 NFL season. A Patriots spokesperson told NewsCenter 5 that construction in that part of the stadium will continue throughout the 2022 season.

Together, the new north end zone project and last year's improvements made to the south end zone will cost a total of $225 million. The entire construction effort is being privately funded by the Kraft family, who own the Patriots and the New England Revolution soccer club, which also plays its home games at Gillette Stadium.

When it first opened, on May 11, 2002, only the lower seating bowl and concourse were available for fans attending a Revolution match against the Dallas Burn (now FC Dallas), won by New England.

Three months later, the World Champion Patriots (who had won its first NFL title the season before) hosted its first football game at Gillette Stadium on Aug. 17. The practice contest came just 12 days after the Gillette Company finalized an agreement for exclusive naming rights to the facility.