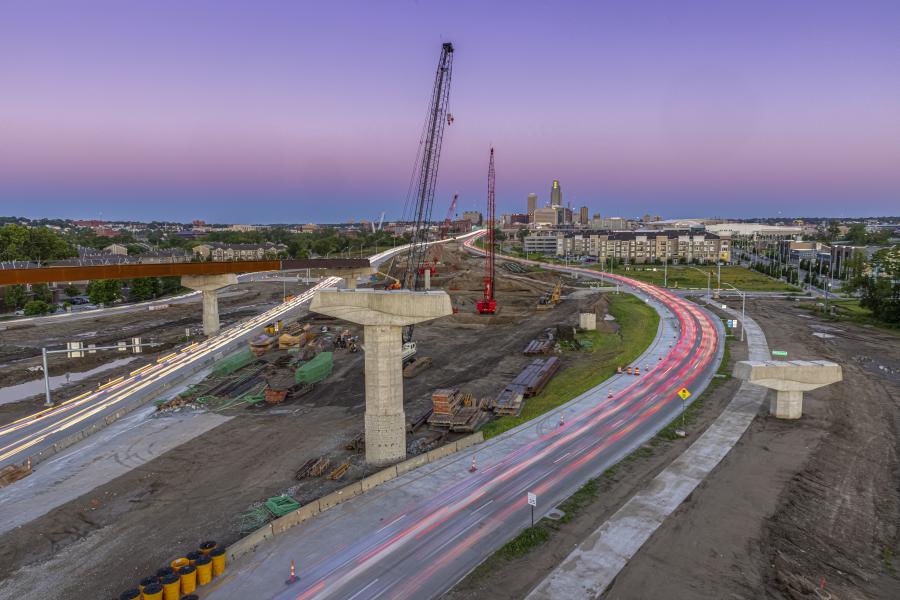 The Iowa Department of Transportation (IDOT) continues to monitor progress on the seemingly never-ending project known as the Council Bluffs Interstate System Improvement Program. The multi-year, $1.5 billion dollar effort began in 2008, with an expected end date of 2026.

"Construction of this program is a marathon, not a sprint," said Mark Pohlmann, Council Bluffs Interstate System Improvement Program manager. "Once complete, access, traffic movement and safety to the public throughout this area will be greatly improved." 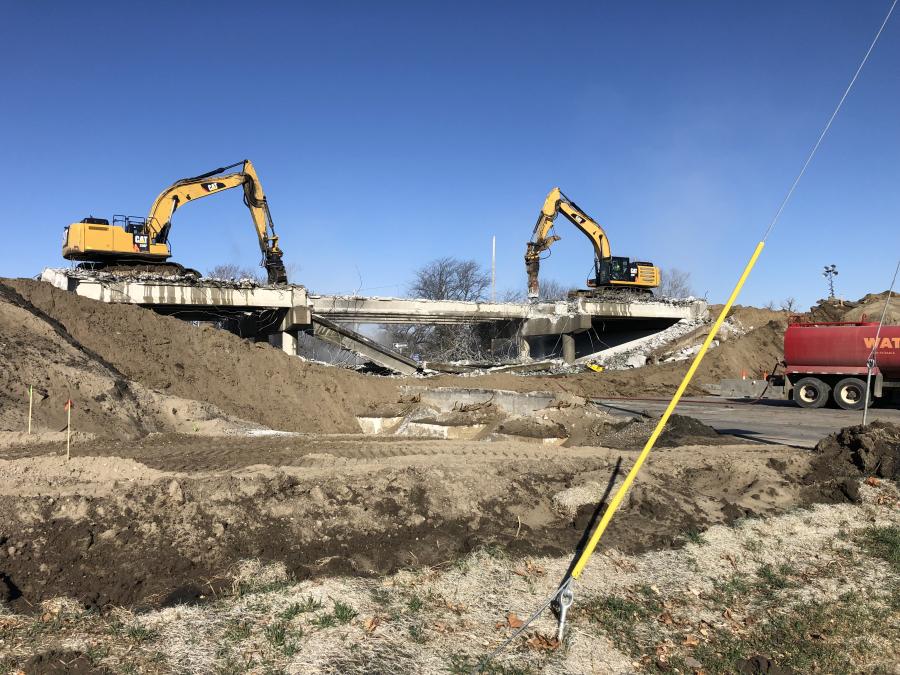 Nearly 80 percent of the work is complete, with the magnitude of improvements necessitating a program management approach. Taking one project at a time would take considerably longer and increase costs.

"It wasn't just addressing one deficiency; it was a corridor approach," said Scott Schram, Iowa DOT district engineer. "If you're going to reconstruct a corridor, it's going to be a multiyear program. And you can't accomplish that without the program management piece."

Originally parsed into roughly 70 small construction projects, the team used a design charrette to develop an efficient construction plan that combined projects into larger packages that would reduce impacts on travelers, increase safety and improve traffic management during reconstruction. This effort also reduced risk for the Iowa DOT by more accurately forecasting costs and future programming, while cutting the original construction schedule in half.

According to Pohlmann, with so many individual projects, parts and pieces, the team quickly focused on timing design efforts to match construction schedules.

"Keeping the program on schedule required constant attention on construction already under way and what was coming next. Final design plans take time, and that timeline expands when accounting for complexity and agency and stakeholder involvement. Understanding and anticipating approvals remained critical for maintaining the program schedule."

Packages were grouped strategically to maximize improvements while minimizing construction impacts to Council Bluffs residents and the traveling public. Early projects were identified in areas that did not affect active traveling lanes. Once complete, traffic was shifted to the new lanes and old lanes were demolished and reconstructed with new materials and bridges.

"We developed traffic staging so that we always had at least two lanes of traffic open in each direction on the interstate and the program philosophy was that once capacity was added, it cannot be taken away, except for low-impact changes, such as overnight closures," said Pohlmann.

Full closure of the interstate was made possible by the parallel one-way frontage roads that were designed to provide direct access to West Broadway from I-29. This will allow the project to be completed nearly two years earlier than if interstate traffic had to be maintained.

"The I-29/Nebraska Avenue Interchange Reconstruction project is more than 90 percent complete," said Pohlmann. "All traffic shifts are finished, and contractors are finalizing demolition of the old bridge over Nebraska Avenue, removing detour pavement, earthwork and general clean-up at the project site. A small pavement overlay project on Nebraska Avenue will be completed by the end of this fall to repair and rehabilitate the roadway for the city of Council Bluffs." 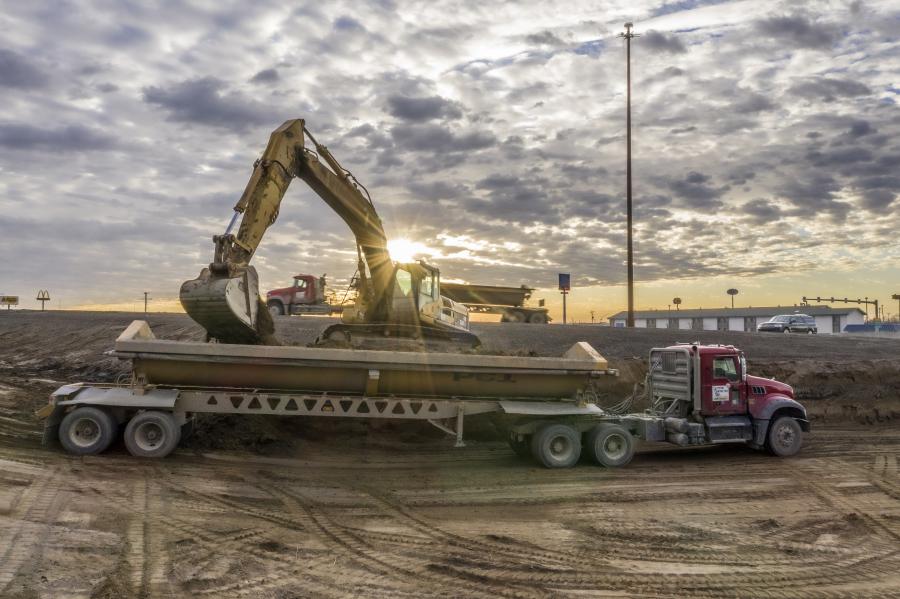 "Our contractors continue to be tremendous partners for this large project. They staff the project with the right resources which allows them to deliver on their commitments. Each of our contractors represent larger, regional construction companies that have the experience and expertise to manage complex, multi-disciplined construction projects like those in the Council Bluffs Interstate program. This allows them to leverage additional resources onto this project when needed to advance the schedule or meet deadlines.

"Strong relationships with all partners, major contractors and prime consultants alike have been key to success. We quickly learned we need to partner on challenges and face them together. Regular construction partnership meetings began between Iowa DOT, HDR's program management leadership and prime construction contractors to work through higher-level issues that could impact the program, beyond day-to-day concerns. Partnering was key to help transition through early years and get to a point where the program and projects are firing on all cylinders."

Pohlmann added that construction is going well, with minimal delays.

"The I-29/Nebraska Avenue reconstruction and I-29/I-480/West Broadway Interchange are both ahead of schedule. Contractors took advantage of more moderate temperatures during the previous winter to continue to advance bridge construction activities, as well as some major earthwork. Our contractors are working very proactively with the program team to plan for any significant impacts to traffic and work zone conditions."

One of the main challenges for crews recently has been working after hours.

"Construction activities can be noisy, and while completing work at night minimizes impacts to traffic, it can be a nuisance to adjacent residential areas. In response, we've worked with the city to accept earlier roadway closure times, which allows the contractor to start and finish disruptive operations earlier. We've also worked with contractors to limit louder operations, like bridge demolition, from occurring during overnight hours.

"There also have been several occurrences where underground utilities have been found to be in conflict with proposed construction. In each case, we've worked with the utility owner to resolve the conflict. Most of the time the resolution is to relocate the utility as expeditiously as possible to minimize any potential delays to the contractor's work schedule."

Fortunately, the mild winters have allowed contractors to build bridge substructures during winter months without much interruption. Construction progress made over the winter is one reason projects continue to be ahead of schedule. 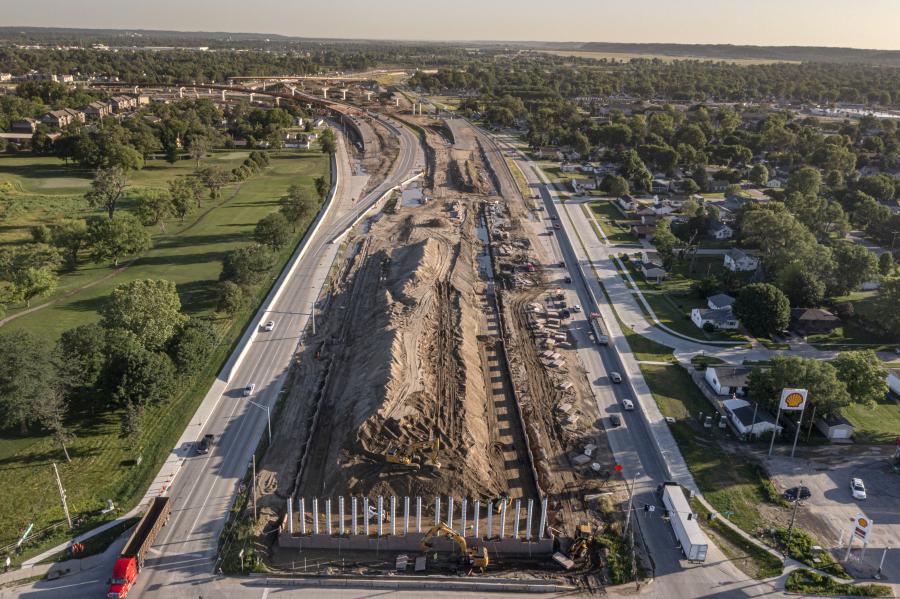 Pohlmann said the most time-consuming part of the current construction is placing wood forms for the bridge decks. The wood forms are custom fit and need to be set at the proper elevation to allow the driving surface to accurately reflect elevations shown in the plans.

"The program has been very fulfilling and is an engineering marvel. In less than two decades, the project team relocated multiple Class I railroads, mitigated worldwide pandemic impacts, managed floods, moved an unprecedented quantity of material and maintained traffic on one of America's most vital corridors.

Pohlmann added, "The project provides a blueprint for large-scale interstate rehabilitation and overhaul efforts in a dense urban corridor, requiring coordination with dozens of agencies and ongoing communication with stakeholders and the traveling public." CEG