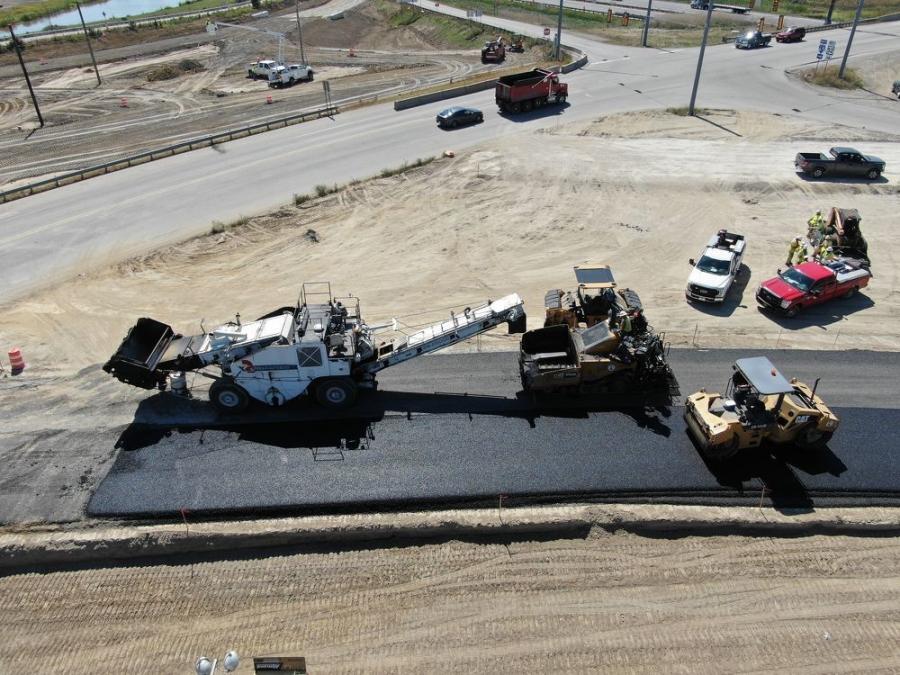 Approximately 150,000 tons of asphalt is being used on the project. It comes from the E&B Paving plant at Harding Street. (INDOT photo)

The Indiana Department of Transportation (INDOT) is building a new interchange on Interstate 65 at Boone County Road 550 South and redesigning the I-65 and State Road 267 interchange at Whitestown Exit 133.

"The purpose of the project is to improve traffic operations along the I-65 corridor, from I-865 to S.R. 267 near Whitestown and to provide improved connectivity between I-65 and the rapidly developing area along the C.R. 550 S corridor," explained Debbie Calder, communications director of INDOT's Crawfordsville district.

Last year, Whitestown was ranked Indiana's fastest-growing community for the eighth consecutive year. Its population increased from 3,132 to 8,627 between 2010 and 2018, when talks about this project began. Over the past decade, developers have added millions of square feet of industrial space and hundreds of thousands of square feet of retail along the Whitestown Parkway east of the southern I-65 interchange, according to the Indiana Business Journal. 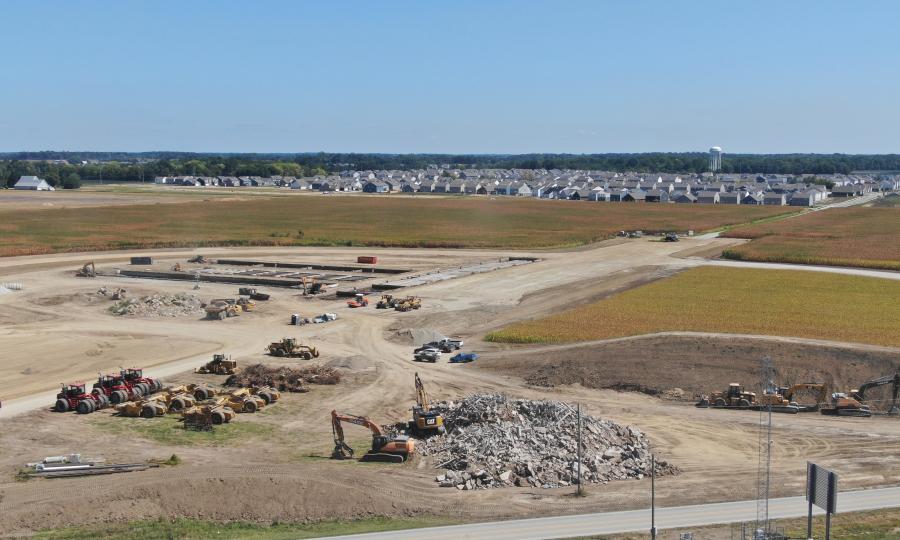 After conducting an interchange capacity analysis, INDOT held a public meeting in 2017 to discuss plans to accommodate traffic resulting from so much growth.

Tanya Sumner, Whitestown director of public relations, reported that the audience was pleased about the proposed reconfiguration of Exit 133 at SR 247, which many feel is "badly needed" to prevent traffic backups.

"Adding a stoplight at Indianapolis Road also is something residents have been asking for," Sumner said, praising INDOT for "proactively planning for future growth and getting ahead of any potential traffic problems."

Whitestown Town Manager Jason Lawson told the Indiana Business Journal that he considers a brand-new interchange a game-changer for the community.

Right of Way acquisition began in 2019 and the $62.8 million contract was let to bid in May 2020. E&B Paving LLC, based in Anderson, Ind., is the general contractor, with subcontractor Fox Contractors Inc. performing the dirt work. Work on the two-year project began in July 2020. Completion is anticipated in August 2022.

"When work started on this contract, there [were] still 13 parcels of real estate that [were] not cleared," said Greg Hole, INDOT project engineer. "The contractor worked in available areas. As each parcel was cleared, utility relocation could begin."

"The pits under the barns were supposed to be empty," Hole said. "We were hoping the pits were full of ground water, but we had it tested. It was manure. We had to pay to have the manure removed."

‘Diamond in the Rough'

Both the new I-65/SR 267 interchange and the I-65/CR 550 interchange will be "Diverging Diamond Interchanges," which INDOT expects to alleviate traffic bottlenecks. The interchange at CR 550 South is expected to reduce traffic on SR 267 and Whitestown Parkway by as much as 50 percent.

The Clinton County Daily News describes a DDI as a type of interchange "in which the two directions of traffic on a non-highway road cross to the opposite side on both sides of a bridge." It requires traffic on the highway overpass to briefly drive on the opposite side of the road than usual. As drivers enter a DDI, they cross over to the left side of the bridge, as directed by signals, signs and pavement markings. DDIs are said to be safer, more efficient and more cost-effective than traditional diamond interchanges.

Calder explained that the new interchange at CR 550 will divert "a significant amount of traffic" from both the SR 267 interchange and the Whitestown Parkway interchange. 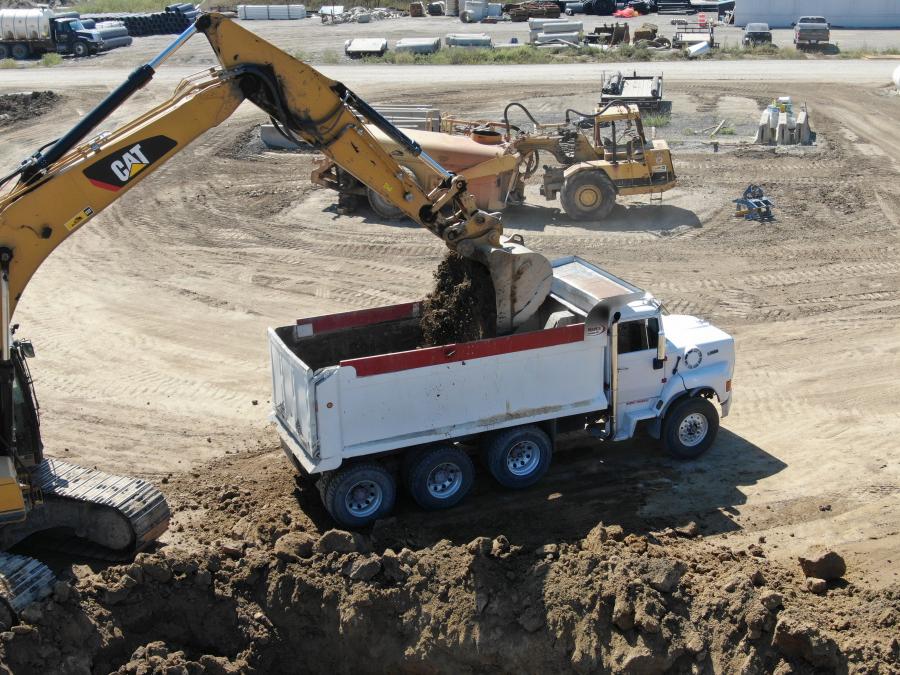 "This diversion improves the operations of the corridor so much that a less expensive interchange at SR 267 can be constructed and still provide the desired level of service," Calder said.

Contract plans call for 600,000 cu. yds. of borrow to be placed for the new ramps and roadways, Hole stated.

"Fox Contractors bought a 40-acre field just north of the project to acquire the borrow for the job," he said.

Approximately 150,000 tons of asphalt is being used on the project. It comes from the E&B Paving plant at Harding Street. With as many as nine different operations going on at the job site at once, up to 75 workers are onsite at any time. Some of them are using as many as 32 dump trucks to haul 10 to 15 loads of borrow or asphalt each day, Hole calculates.

In addition to asphalt, crews will be pouring concrete. They're using a new concrete additive, E5, on all the bridge decks because it gives the concrete "better workability," Hole explained. E5 Internal Cure is a concrete admixture that provides proven benefits during placement and in the overall quality of in-place concrete, according to the company.

Calder said the project will be paid for with federal funding, but that's only partly true. In 2017, reports the IBJ, Whitestown created a tax-increment financing district to pay off bonds that were sold to raise its $10 million portion of the $63 million interchange project. In addition, 50 percent of additional property tax revenue generated in the district during the next 10 years will go toward retiring those bonds.

However it gets paid for, the I-65 interchange project is expected to launch extensive commercial development. Initial plans called for a mix of retail and industrial development, along with office and health care space, but COVID-19 ended plans for several brick-and-mortar retail outlets. 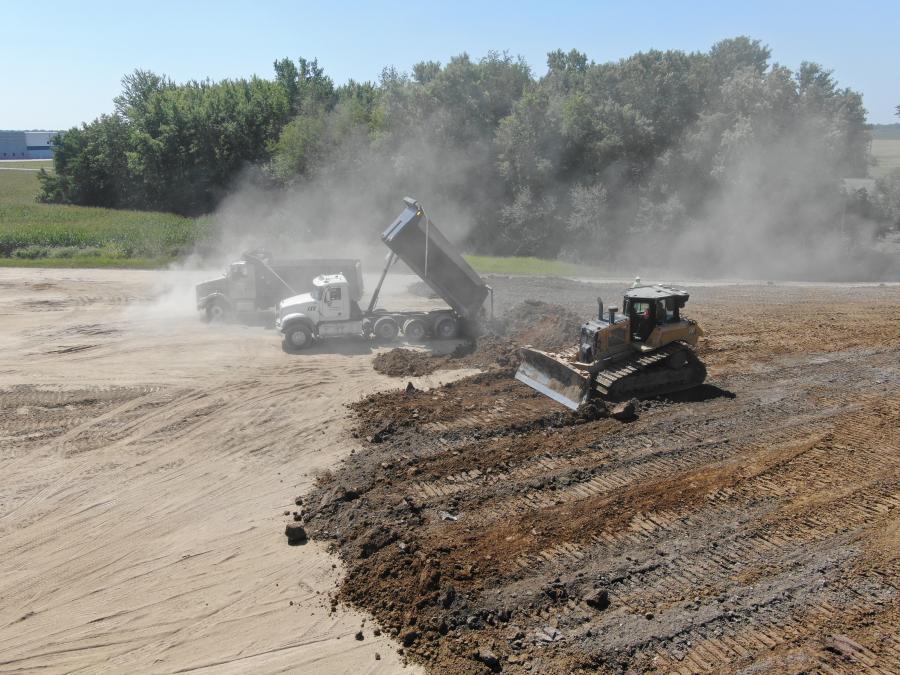 For example, IBJ reports that Indianapolis-based Gershman Partners canceled three-year-old plans to build a 1 million sq.-ft. shopping center northeast of the proposed CR South interchange that was rumored to have big-name retailers like Ikea.

Whitestown's director of operations and economic development, Nate Messer, believes it to be a temporary setback and expects investors to return to claim the prime real estate with interstate access.

He appears to be right, as Duke Realty is forging ahead with industrial developments in Whitestown and Strategic Capital Partners, based in Indianapolis, has begun phase two construction on an industrial warehouse project that has already seen leases signed by Lowe's and other companies. With easy access to I-65, a major trade route connecting Chicago with the Gulf of Mexico, the area is likely to attract more warehouses in the future, even if Whitestown officials would prefer a mix of businesses.

According to Calder, some of the SR 267 interchange work, the northern SR 267 bridge and the CR 550 South interchange can be completed with minimal impact to traffic. Although there is no significant impact to traffic related to I-65, there are detours related to local roadway realignments associated with Perry Worth Rd. and Albert White Drive.

The scheduled completion date for an added travel southbound lane of I-65 at I-865 was Oct.15, 2020, and it finished on time, Calder said. The completion date for an added lane of northbound Whitestown Parkway exit ramp was Oct. 31, 2020 — also completed on time. A box culvert on Indianapolis Road was replaced with a bridge; it required 100 days of closure of the road. This project was completed on time.

An intermediate completion date of Nov. 15, 2021, has been delayed due to ROW acquisition; the current completion date is scheduled for Aug. 20, 2022. Calder thinks it may be possible to make the CR 550 South interchange operational before the reconstruction of existing portions of the SR 267 interchange are completed.

In order to keep to the schedule, the contractor usually works weekdays from 7 a.m. until 4 p.m., but Calder said that there has been some Saturday work.

"Any work that interferes with traffic on I-65 is being done at night, so there is occasionally some night work," she said.

Calder mentioned that community engagement about the project, which began with that public meeting years ago, continues "as needed" with a supportive population eager to see the results of this. CEG