For Jay Cleveland, president and CEO of Cleveland Brothers, the impact the oil and gas business has had on the company is clear. 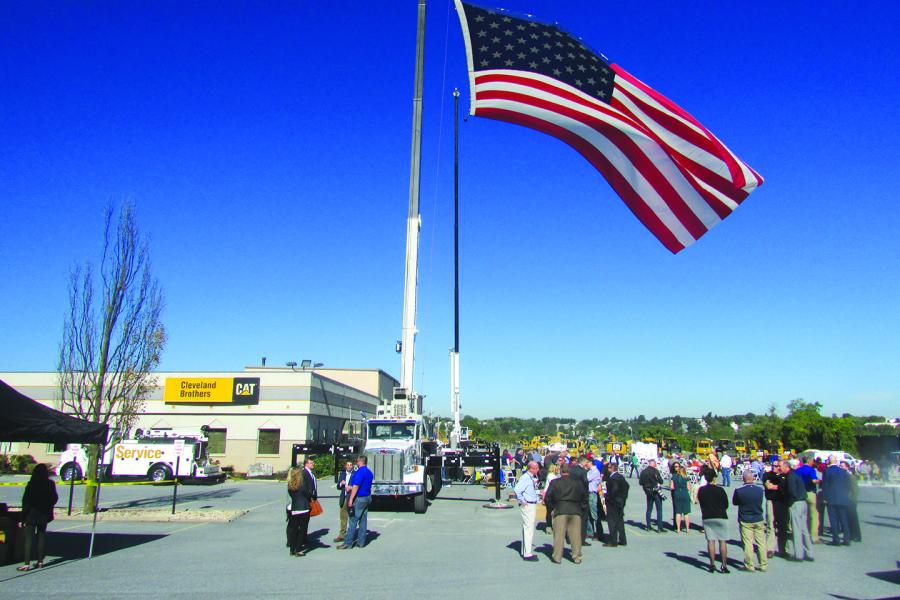 It was a beautiful day for a rally at Cleveland Brothers Equipment Co., in Harrisburg, Pa., where hundreds of industry professionals and stakeholders gathered together Oct. 19 to show their support at the Energy Builders Rally of Pennsylvania Energy Infrastructure. Over a lunch catered by Pig Tails Barbeque, supporters listened to impassioned speeches from state senators and representatives, industry leaders and others beneath the backdrop of an enormous American flag, donated for the day by event co-sponsor Stephenson Equipment.

For Jay Cleveland, president and CEO of Cleveland Brothers, the impact the oil and gas business has had on the company is clear.

“Jobs, jobs, jobs,” said Cleveland to the crowd. Cleveland Brothers, he said, is involved in all aspects of energy infrastructure, from installing pipelines to compression work, maintenance to machining.

“It's been a tremendous boost for our company and our people,” said Cleveland.

But the benefits of the oil and gas business reach far beyond the industry itself, Cleveland pointed out.

“I don't think there is a community that isn't affected by this throughout our great state,” said Cleveland. “That means jobs across many industries… hotels, restaurants, trucking, business fabrication, residential and commercial developments. Pennsylvania needs to be friendly to this business. We need to harness this. It is a game-changer, it can be a change for the whole energy policy for the country and we need to harness that.”

Toby Mack, CEO of the Energy Equipment and Infrastructure Alliance (EEIA), the group responsible for putting together the Energy Builders Rally, said the event's goal was twofold.

“We are trying to build public and policy maker support for pipelines, but we are also trying to energize, mobilize all of these people here, whose livelihoods depend on this work, to get into the game, because there is a lot of opposition, so we are there to provide that counter balance, that counter force, that counter choice to that opposition,” said Mack.

“[Priority number one is] to get pipelines permitted and built,” Mack continued. “We have this enormous wealth of natural gas in the state of Pennsylvania and you can't get it to market because you don't have enough pipelines to get it from where it's being pulled out of the ground to where it is being used.”

George Stark, of co-sponsor Cabot Oil & Gas, and the event's emcee, had hopes for the rally which centered on “a great crowd, a great day and an educational bottom line.”

“Everyone drives by this facility,” said Stark about Cleveland Brothers. “I drove by here every day. You don't know how many people are employed here and what happens here. The more we get people to understand that this is a major economic engine — and I don't think people give it the full credit that it deserves … that's the piece we enjoy talking about … and that is what we want to showcase — the advances and equipment, the knowledge level of the employees and the care.

“The goal is to find your voice, speak about what it is that you know and you share that knowledge,” said Stark.

But for Stark, encouraging industry professionals to speak out is only partially effective. The other key component is encouraging these individuals to register and vote for what they believe is right. “Not just one, but both,” said Stark.

Jim Joy, industry sales manager at Cleveland Brothers, talked about the need for politicians to understand how the laws they make affect the industry long-term.

“We need to influence and educate our politicians to understand that this industry cannot operate like a light switch — one year it's yes and everything goes and then the next year it is no and everything is shut off,” said Joy. “It affects the whole economy that way. For example, [Cleveland Brothers'] source of machines is Caterpillar, [so] from the supply base that supplies Caterpillar, Caterpillar supplies us, we supply the customers … and then you say guess what, we just changed the law. Then you create a hundred-mile-per-hour locomotive that now has to stop on a dime … it's a wreck.”

Joseph Lundy, CFO of Cleveland Brothers, addressed the enormous growth the natural gas sector has seen in the last decade.