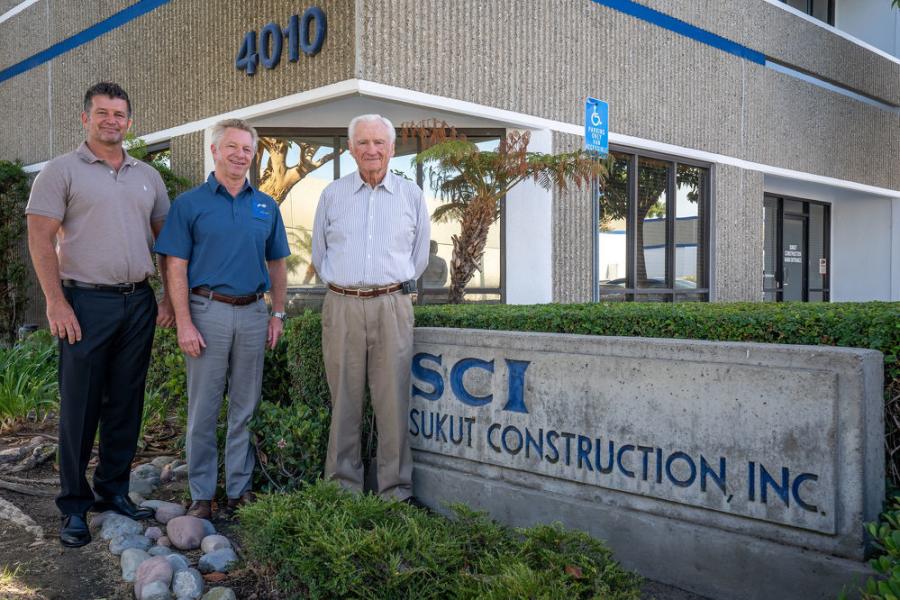 Hard work and integrity are key ingredients to making any business successful. Breathing life into a new company is always difficult, but growing and sustaining a business for five decades, while evolving it into a multi-million-dollar operation, is extraordinary.

Myron Sukut and Mike Crawford have done those very things. 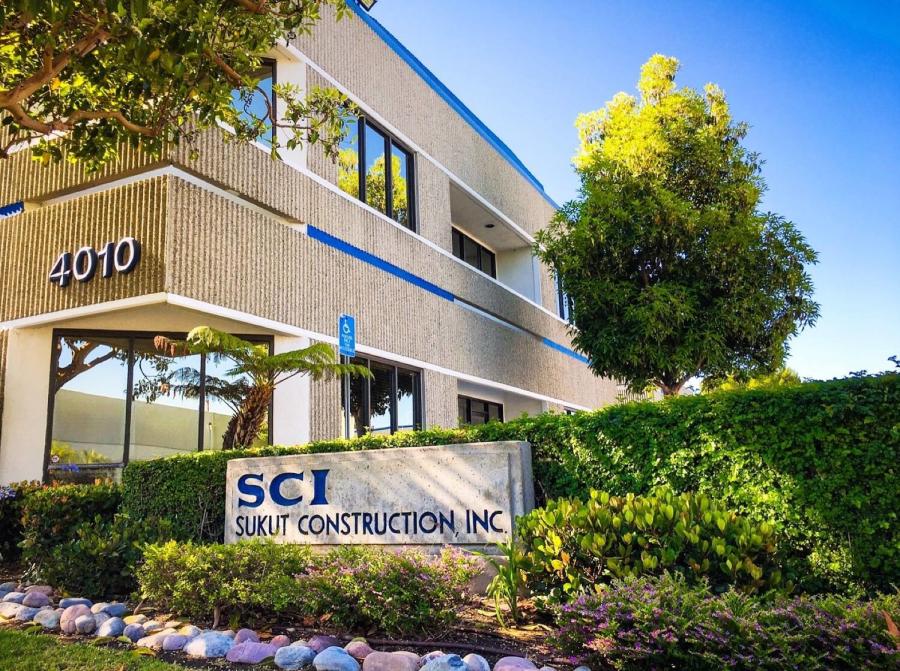 Sukut Construction, one of Southern California's top-rated heavy civil-engineering contractors, has reached rarefied air as it celebrates its 50th year in business this month. From a two-man operation in 1968, Sukut became a fast-growing company in residential building before later entering the public works, environmental, energy and special projects markets.

Sukut also has been recognized for its work on a variety of nationwide projects, ranging from small to large, and encompassing earthmoving, dam construction, roadways, major drainage structures, environmental clean-up, landfill openings and closures and projects in the renewable energy field.

In recent years, the firm has received more than 30 industry honors, including “Contractor of the Year” by the Southern California Contractors Association and “Best Company to Work” by the Orange County Business Journal.

From the very beginning, Myron Sukut, and the Santa Ana, Calif.-based earthmoving company that bears his name, have enjoyed impeccable reputations, largely because they conduct business with honesty and treat employees with respect.

Sukut and Dick Coulson were co-workers at another company in 1967 when it was suggested to them by a local equipment dealer named Chet Bitner that they should buy some of his tractors and form their own earthmoving outfit.

Although itching to strike out on his own, Sukut was understandably hesitant about taking the leap.

“I went into the office that night and said to Dick, 'You know, Bitner just decided that you and I should go into business,'” remembered Sukut. “'And Dick said 'God, what a great idea!'

“'You gotta be kidding me!' I said. Dick had five or six children and was not really in a position to gamble too much, but he was more enthusiastic than I was.”

The two men discussed the idea for about a year before finally making the decision to create Sukut-Coulson in the summer of '68. As an early sign of their integrity, though, they told their current boss that they would stay on until their current projects were completed and their replacements were hired.

That done, Sukut-Coulson benefited from good timing as it was a grading company in a rapidly expanding Southern California residential market. 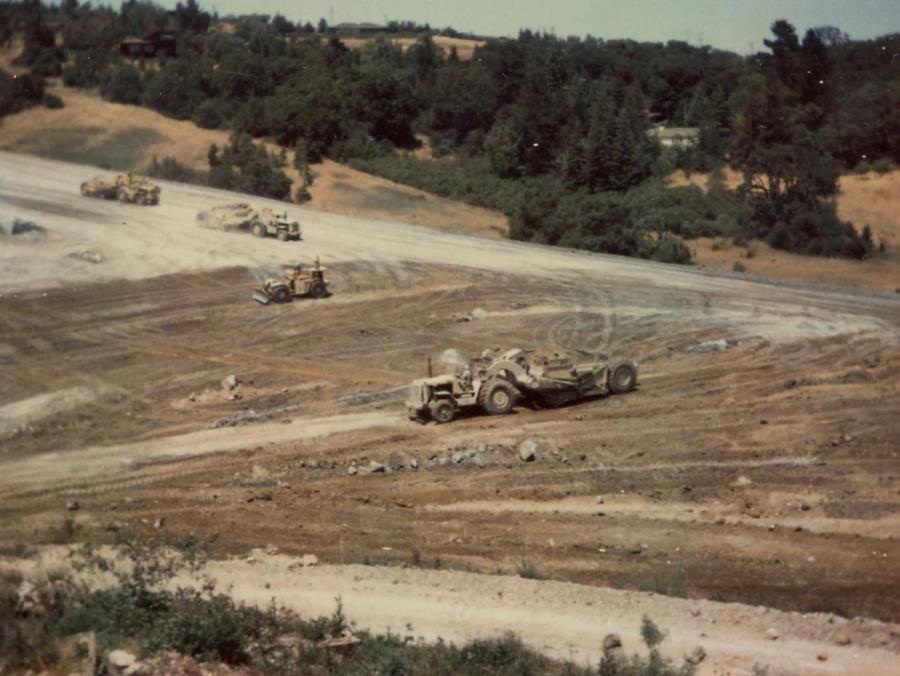 “We started our first project within two weeks for a client that I had done some work for in the past and we hired some of the same guys that had previously worked for us as independent contractors,” Sukut said. “Because all these guys had jobs with other companies, we really only worked Saturdays and Sundays for the first month. But, by December we got our first public job for the Los Angeles School District to build an access road. That project allowed us to bring in our first foreman. After that, we just started piling up one job on top of another.”

That growth kept building over the years to where what started out as a two-person company now has over 660 employees.

The organizational staff has evolved over time, as well. Although Sukut and Coulson began the venture together, in 1970 Coulson left to pursue other endeavors. By 1974, the company was renamed Sukut Construction, with Myron serving as CEO and president.

In 1980, Sukut Construction moved to its current corporate headquarters on Chandler Avenue in Santa Ana. 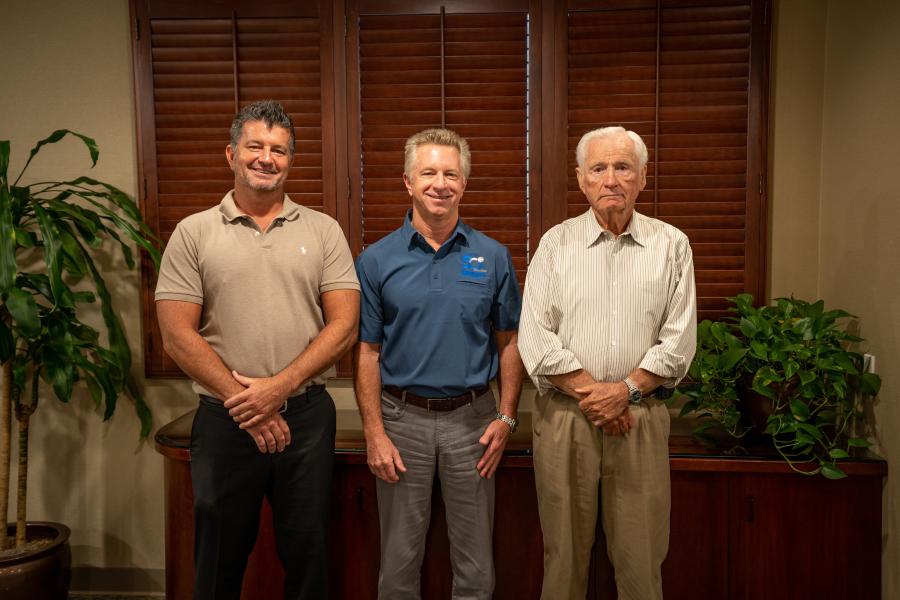 That same year, Mike Crawford began work at Sukut as a six-month intern while still attending college. Today, he is the company's CEO.

“I had a buddy in my classes that worked for Myron,” Crawford said. “He was always telling me about this cool company that he worked for. He said the owner takes the time to talk to his employees and values their opinions. Everybody worked hard, he said, but always found time to have fun get-togethers. I told him if ever an opportunity came up, I would love to come work for them.”

As it turned out, while still in college Crawford ended up replacing his friend at Sukut. After graduation he interviewed with other firms before realizing he was already working for the best company for him.

“Over time, I was a project engineer, an estimator, a project manager, a superintendent and then vice president, before becoming CEO in 1999,” he added. “I guess I have done almost every job in the company over the last 38 years.”

While Crawford remains the company's CEO, the continuing transition to yet another generation at Sukut occurred when Steve Yurosek was named president in 2017.

Before coming on board in 2004, Yurosek worked for a competitor of Sukut's in the Los Angeles area. When that company was forced to close, Crawford, who knew Yurosek through the local building industry, called him the same day to offer him a position.

“Because I had relationships and contacts with builders in L.A., I opened an office for Sukut in that city and ran it for several years,” Yurosek said. “It was a natural fit because, at that time, Sukut was looking to increase its footprint in this area. Within a few years, Sukut reorganized and I started heading up our residential market, working primarily with Southern California's diverse and wide-ranging residential homebuilders. I was promoted to president in 2017.”

In the beginning, Sukut focused on grading for many of the major residential communities in Orange County. But Sukut did not stop there. In the last 50 years, Sukut has expanded to specialize in five general market areas. Still a fixture in the work it does for home builders, Sukut also takes on public works projects, as well as environmental, energy and special projects and joint ventures.

“Our environmental work encompasses landfill construction, landfill closures and environmental clean-ups,” Crawford said. “In fact, right now we are working on cleaning up after several of California's big wildfires. We've been hired by Cal Fire [California Department of Forestry and Fire Protection] to come in and remove the residences that have burned, as well as handle the toxic material left behind, and re-grade the lots so homes can be rebuilt and families can come home again. It's important work and we're honored to do it.” 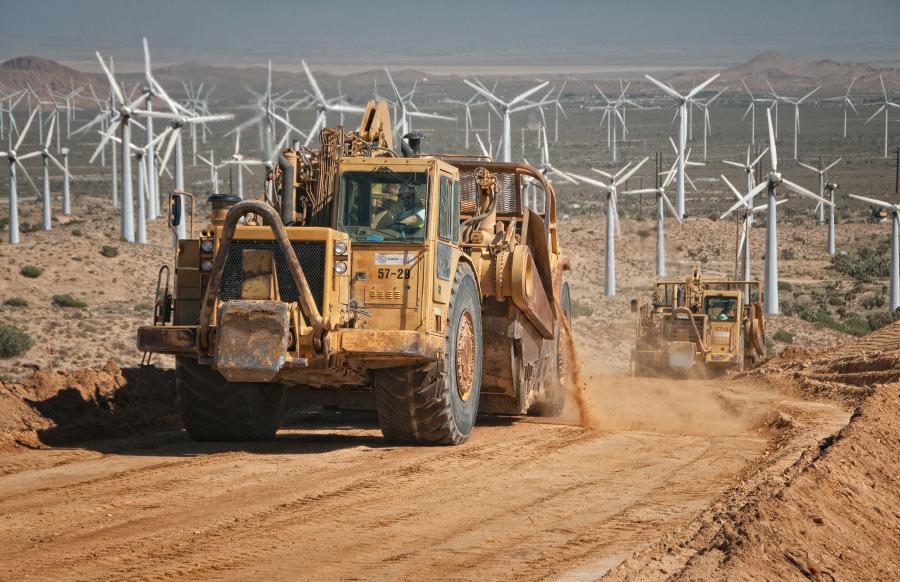 Sukut's work in the renewable energy sector has concentrated on helping build solar farms in the deserts nearby and in Nevada, but also in areas as far away as eastern Virginia and other east-coast sites.

In the public-works arena, Sukut has built a seemingly endless list of streets, roads, pipelines and other drainage structures for various county, state and federal government agencies.

Crawford said that when a project is too large for Sukut to build by itself or when partnering with another construction company can result in a better product for the owner, the company has mastered the art of working cohesively with other companies in joint ventures.

Sukut's first and largest such joint venture project to date was the Eastern Corridor 241-261 Toll Road through the rugged Santa Ana Mountains of Orange County. The design-build project consisted of a six-lane highway stretching for 26 miles. 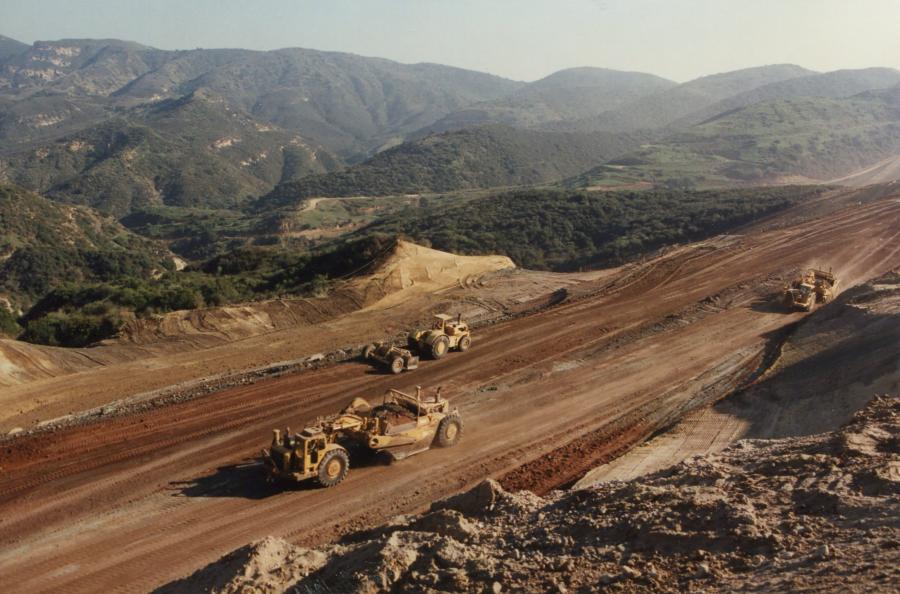 As the prime earthmover on the job, Sukut moved 67 million cu. yds. of earth, including 15 million cu. yds. of rock. Earthwork excavation included cuts with 300-ft. and 400-ft.-deep fills, the movement of dirt for 72 bridges, the construction of 102 structures encompassing 82,000 cu. yds. of drainage concrete, and 213,000 linear ft. of storm drain pipe. This work also included hundreds of utility relocations.

By partnering with Flatiron Construction, Wayss & Freytag and Obyashi Corp., the toll-road project was completed in 1998 under budget and approximately one year ahead of schedule. As a result, it became one of the most successful design-build transportation projects in Southern California and earned five national awards.

“At that time, we were a company that did about $30 million in revenue a year, but we were one of the top grading contractors in Orange County,” said Crawford. “When the toll road job came up for bid, it was a $700 million project — clearly too big for us — but we were the most uniquely qualified to move the dirt on the project. We ended up being the low bidders by over $100 million, a fact that stressed Myron a bit as he was still financially guaranteeing the company's performance.”

Crawford described the road project as logistically “difficult” and a job that left no room for error on Sukut's part.

“It was a pivotal job for us and a fantastic success that we parlayed into growing the business even further,” he said.

A Project That Simply Cannot Fail

Currently, Sukut is working as a joint venture partner on the replacement of the Calaveras Dam in Northern California, a project that Crawford describes as its most difficult yet. 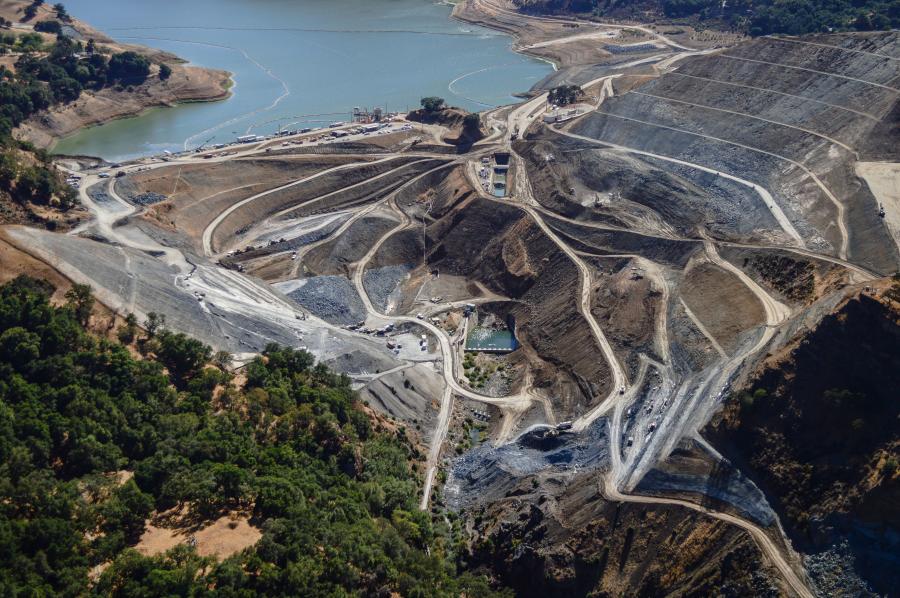 Built for the San Francisco Public Utilities Commission near Fremont, he said the earthen dam is technically challenging, has many geological issues and has come with “lots of changes.”

“But, we have managed the project well. Dams are challenging by their nature and made more so by many inspections, rules and specifications. Quality construction is needed, though, because you are protecting the supply of water and the lives of the people downstream,” he said.

Most of the structural work is complete, Crawford reported, with the rest of the joint venture's remaining work being the construction of access roads to and around the Calaveras Dam. He expects the job to be completed next summer.

Looking Ahead to a New Generation

Fifty years of continued success has put Sukut Construction in an expansive mood. 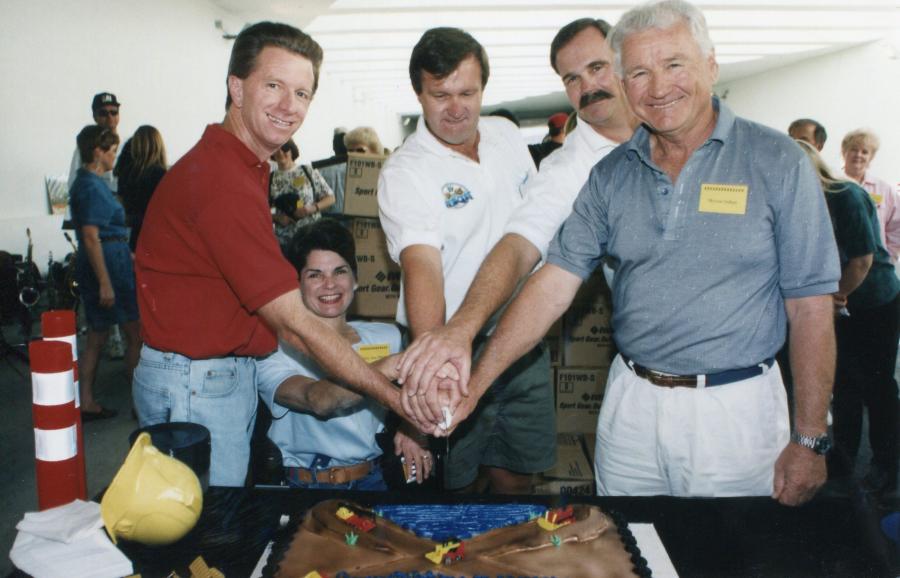 “It's not growth for its own sake, but about letting our people try out their ideas and expand their abilities,” he explained. “We prefer to keep our employees and make their careers worthwhile for them, so they don't have to leave the company to find increased opportunities. In addition, we're expanding geographically around the United States. We continue to look for projects that have large earthwork, pipeline and energy components that can utilize our core competencies. And we're always on the lookout for good people as well.”

Sukut also has expanded the ownership of the company to 85 shareholders, many of whom are key people within the business.

“That's been one of our best attributes,” Crawford proudly admitted. “I think that's a one of the reasons for our continued success.”

While continuing to provide earth-moving technology at more than 30 sites throughout California, Sukut has committed to expanding its role as a steward in developing effective and environmentally sound earthmoving solutions.