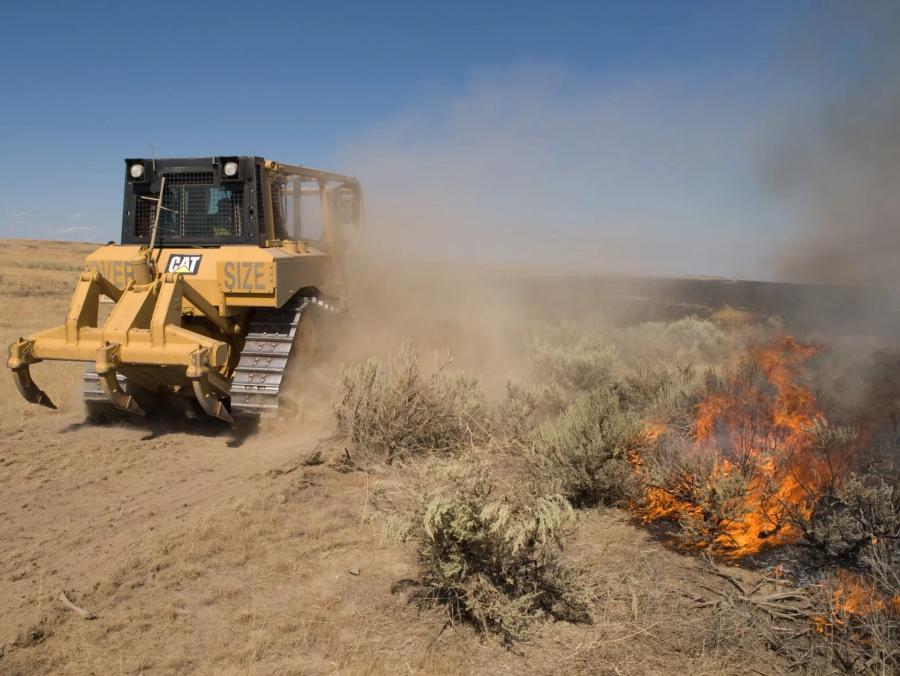 As 51 wildland fires burn in the western United States, heavy equipment is playing a big role in helping fire fighters contain the flames.

“The biggest fires are in Oregon, Washington and Montana,” said Jessica Gardetto, spokesman for the National Interagency Fire Center, headquartered in Idaho and a former wildland firefighter. “We also have some in Idaho and California. The Chetco Bar fire in southern Oregon started on July 12 and has been burning for more than a month. The estimated containment isn't until October 15. That gives you an idea just how fast they are and they are burning in such thick dry vegetation that they are difficult to put out.”

In areas where the terrain is rangeland, which includes parts of most Western states, a Caterpillar D6TXL, a type 2 bulldozer, is the equipment of choice, Gardetto said. It's a medium sized dozer with a large presence and especially effective at removing short vegetation, such as sage grass.

“They are really effective in building fire lines,” she said. “They'll take the dozer out and drive alongside the fire or get ahead of it if possible and make a large line of dirt around it and when the fire hits that dirt, it goes out. At least in theory, depending on how windy it is. I have seen wind push a fire right over the dozer line. One of those dozers can makes miles of line in just a matter of an hour. It is amazing how good they are at doing it.”

Firefighters, usually those with the most experience, are trained to operate the equipment, a critical key for everyone's safety. The operators need to understand fire behavior — how it grows, how the weather effects it and how fire will burn in different terrains.

“The guy who is the lead dozer operator for the Boise Bureau of Land Management has been fighting fires for close to 30 years,” Gardetto said. “He just really knows wildfire. If not, you can get yourself in trouble because wildfires can shift in a matter of seconds. In some cases, the fire will move as fast as the wind is blowing. If you get a gust of wind that is moving 50 mph that fire is going to move at 50 mph. That's why dozer operators need to be experienced.”

Fire districts often own their heavy equipment but also rent additional pieces during the fire season.

Dozers are less efficient and even unsafe in forested areas where trees can reach well over 100 ft. and the terrain can be steep. Those conditions call for several other types of heavy equipment are put to use in forested areas.

Feller-bunchers cut trees and pile them in bunches. They are excellent machines for clearing standing timber from fire lines and can clear a mile of line, 50 ft. wide in a one operational shift, usually about 15 hours, Gardetto said.

Firefighters also use several different types of masticators, also referred to as mulchers. Masticators can be boomed mounted or track mounted.

Skidders are another go-to piece of equipment in fighting wildland fires and are designed to drag cut timber out of the woods, most often in tree-length form.

“When you have so much heavy equipment especially all in one location, you have to have awareness of what is going on around you,” Gardetto said. “Firefighters call it situational awareness. They have briefings every morning and in most cases, an evening briefing as well. They always go over safety issues in the briefings. They'll talk about everything — poison ivy, wasps in the area or that we have heavy equipment in the area, so please be aware.

“Without this heavy equipment, fighting wildfire would be much more difficult and less safe, and it would take us longer to put out fires, too. If you can imagine that. I know as a former firefighter, I was definitely grateful to have the heavy equipment on site. I can remember digging a fire line with my Pulaski and seeing a dozer come along and put in a fire line in seconds what would take me hours to do. They just drive right by.” CEG

The Biggest Fires in the West

Size: 120,000 acres and the largest in Montana; threatening residents

Size: 93,000 acres and largest in California