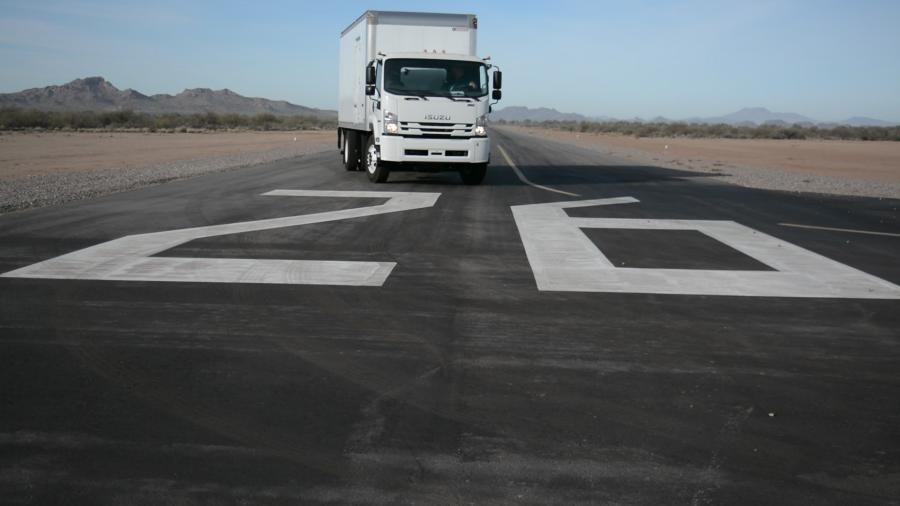 Pro Formance Group Inc. (PFG) in Chandler, Ariz., pitted the Isuzu against five of its top competitors in five areas important to owners and operators of Class 6 trucks.

Isuzu Commercial Truck of America Inc. has announced the results of independent testing of its all-new FTR. The testing pitted the Isuzu against five of its top competitors in five areas important to owners and operators of Class 6 trucks.

“When we introduced the FTR last spring, some naysayers thought a four-cylinder Class 6 truck could never compete with the six-cylinder models you typically find in this segment,” said Shaun Skinner, president of Isuzu Commercial Truck of America Inc. “But the results demonstrate that the FTR exceeds expectations against the top vehicles in its class — and beats them all for maneuverability and fuel economy.”

The tests were conducted by Pro Formance Group Inc. (PFG) in Chandler, Ariz., and the results were certified by the Sports Car Club of America (SCCA).

The testing consisted of the following:

The testing methods were designed by PFG to emphasize consistency and repeatability of results. In addition to SCCA — which sanctioned, observed and validated all testing procedures — PFG engaged Trivinci Systems of Ashburn, Va., to provide all instrumentation and an engineer to capture, record and analyze all data during testing.

Fuel Economy: has been one of Isuzu's strengths since its entry in the market more than 30 years ago — and the FTR reinforced Isuzu's reputation for efficiency. The new Class 6 truck placed first on the mountain route and in stop-and-go city driving.

Acceleration: In acceleration testing, the Isuzu FTR consistently placed in the middle of the pack, due to a 5.2-L turbocharged, four-cylinder engine that generates 215 hp and 520 lbs.-ft. of torque.

Maneuverability: In maneuverability testing, the FTR was the clear winner, with a measured curb-to-curb turning diameter of 49.0833 ft., beating the second-place finisher by more than 1.79 ft. — and the last-place competitor by nearly 20 ft.

This allows the FTR to carry a 24-ft. dry freight box on a wheelbase of only 212 in. — while four of the other five vehicles tested required wheelbases of more than 250 in.

“We're thrilled with the results of these tests, which were conducted independently, verified and certified,” said Skinner. “All of the trucks did well in some of the tests, and the FTR did well across the board. That validates our belief that FTR is the best overall choice for the Class 6 market of today and tomorrow. It offers the right combination of performance, maneuverability, dependability, efficiency and low cost of ownership.

“It's the complete package.”