The campus will serve youngsters from Pre-K through 6th grade, and was designed to accommodate a future expansion for middle school students. 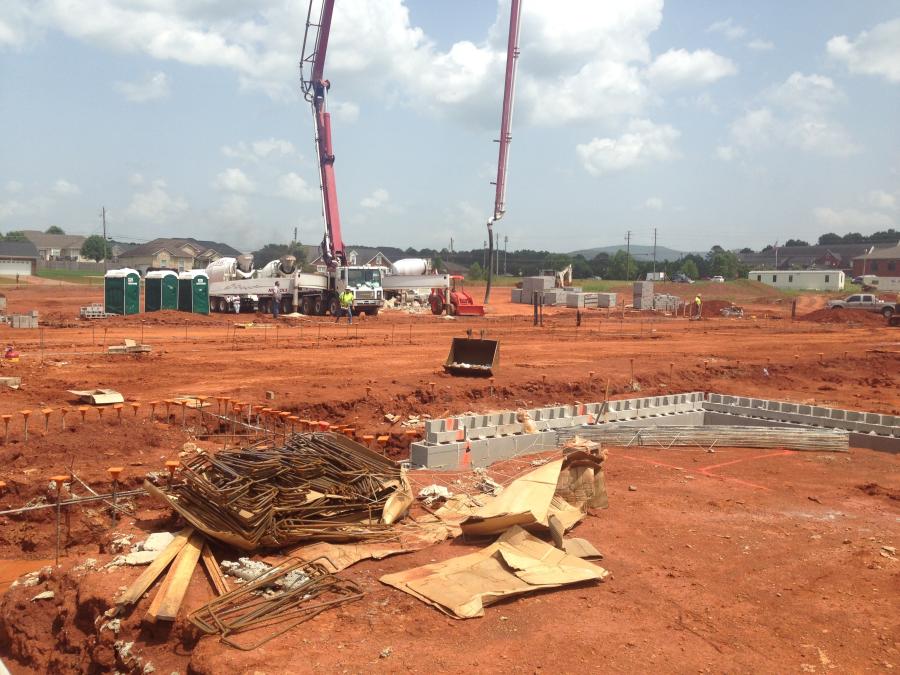 Students attending Kitty Stone Elementary in Jacksonville, Ala., are beginning the school year in a new, 94,000 sq. ft. (8,732 sq m) facility. The campus will serve youngsters from Pre-K through 6th grade, and was designed to accommodate a future expansion for middle school students. Located on a 30-acre site, it will give Jacksonville City Schools some of the most modern facilities in northeast Alabama.

City and county officials, school board members, principals, students and community residents took part in a groundbreaking ceremony for Kitty Stone, which is a replacement school on a site adjacent to Jacksonville High School. The total cost of the project is expected to cost more than $13 million, including design fees and furniture. Carrollton, Ga., based RA-LIN & Associates was hired as the construction manager to lead the building process.

RA-LIN senior project manager Derek Smith said crews have been focused on a final cleaning, along with completing fencing, the playground, installation of low-voltage equipment and moving in owner-provided furniture.

Enforcing compliance of project plans and specifications has been a chief concern, as well as maintaining the project schedule for owner move-in for the new school year.

As for the most time-consuming part of the job, said Smith, “Masonry is the critical path subcontractor, with electrical and mechanical running a close second.”

First Team Construction Company Inc. of Auburn, Ala., was selected to build the new school. First Team Construction vice-president Chad Beasley said, “Currently, flooring finishes are going down, final MEP terminations are being made, casework is being installed and final paving of the parking areas is expected to begin. Canopies still have to be finished, as well. Classrooms floors will be waxed and the owner's furniture is scheduled to arrive on site. It's a major push in many areas, and we have been running a seven-day per week schedule, in order to get it done.”

The project, which calls for multiple classroom wings, a gymnasium, cafeteria and a courtyard classroom area, has not been without its share of challenges.

“Initially, the time line was more relaxed, but the site clearing and building pad prep took almost five months, when it should have taken just one,” said Beasley. “This was due to the weather conditions. We mobilized to the site in February, 2015. Afterward, we had multiple days of snow and ice. Even roads were closed at times, so crews couldn't get to the job site and obviously couldn't work it. After temperatures got better, we had a very rainy spring in 2015. The wet weather continued to delay the grading schedule.

“Grading was critical, in order to release other activities, but when such a critical trade is being delayed due to the weather conditions for the length of time it was in Jacksonville during that stage, it is difficult to overcome. Our aerial pictures each month showed the wet conditions. Additionally, we had two wind damage occurrences during the building construction — one regarding slab prep where our wire mesh rolled up like a ball, and the second where a section of trusses dominoed over and had to be replaced. Redoing this work also caused delays.”

The existing property was approximately 34 acres of cut over timberland.

“The biggest impact to us is the time it took to destump and grub the site,” Beasley said. “Burning was not allowed after day one, so all the debris had to be hauled off as disposed of off site.

“We had to clear and grub the entire site. Then, the site was to be balanced to establish the building pads. Upwards of 80,000 cubic yards of dirt was moved. Prior to construction, we value engineered the project, which included lowering the planned building elevation by six inches. It was a good thing, as a large bottom corner of the site unexpectedly had soils not suitable for the building pad and parking lot areas. The on site suitable soils almost ran out. But by cutting out and back filling borrow pits on site in the non-building areas, we were able to reach the needed sub-grade elevations.

Beasley said the critical goal at this time is to get the user into the building, and have it pass a life safety inspection.

“Outside, we are now, for the most part, in a drought, and only a small amount of the area outside the building is irrigated. We have seeded/strawed the bulk areas of the site, but without needed moisture, this may have to be revisited. Also, the final wearing surfaces have to be installed, striping on the asphalt must be done, and a general final cleanup is needed.

“Most of the K-12 schools we build in Alabama consist of concrete masonry unit (CMU) construction. In turn, the CMU installation is always on the critical path of the construction, and drives the schedule of the building, just like the grading does earlier on. A successful masonry installation is key on these type projects, but this also involves other trades getting their components installed into the CMU walls, as they are constructed. Coming back after the fact to make corrections is costly and often alters the appearance. Beyond that, it's getting a good group of subcontractors on board.”

The gym and kitchen/cafeteria buildings were pre-engineered metal building (PEMB) frames. At the kitchen, it was PEMB structure only. The roof consists of shingles over plywood, and the walls where CMU/brick. The gym was a more typical PEMB with a metal roof and some wall panels, but also had a combination of CMU, metal stud framing, densglass, EIFS and brick. The classroom construction was CMU/brick walls, wood trusses overhead and shingle roofs on top.

“One section of the overall building is designated as a storm shelter for severe weather protection. This section is made up of classrooms, but the wall construction is 12-in. CMU, in lieu of eight inch CMU construction. The CMU has rebar in every cell, versus a wider spacing, and the walls are poured solid. All exterior door or window openings have to be FEMA rated. Penetrations of conduit, pipes, etc. through the wall cannot exceed a specified size. The shelter area is capped by a concrete slab which is then covered up with the wood truss roof framing.”

“The site subcontractor on this project didn't use a dirt pan, and shaped the site as he dug with the excavators,” said Beasley. “We had multiple mini-ex machines and skid steers after that. Lulls were relied on in the CMU, steel and truss installations.”

Some of the materials being used during construction have included gravel, concrete, CMU, mortar and sand, wood, steel, shingles, metal roofing, asphalt and VCT/carpet/hard tile flooring.

Beasley said the elements were a major issue not only during the bulk grading, but also regarding the concrete installation, as well as the CMU install.

“We cannot lay wet block. In general, rain also delays the construction until a roof is on, or we are otherwise 'in the dry.' Winter weather also has its limitations depending on temperatures, but this past winter was fairly mild for us.

“We are still feeling the impacts of the weather delays in the grading scope at this point in time, because of where the job is now, taking longer than it should have. Such a delay is difficult to overcome, because only one trade is on site during that activity. Outside of grading the masonry installation spanned over about 12 months.”

Beasley said, “Despite the four-month loss in the grading, which impacted the whole project duration, we have gained back at least two months of that loss at this point, which was critical in order to get the school open for fall. Anything less was not an option.”

Project architect McKee and Associates of Montgomery, Ala., was responsible for the design of the new elementary school. Architect Lisa Bowen said, “The vision was to provide a modern cost-effective facility and amalgamate with the existing Jacksonville High School that benefits the initial and impending student needs of the city of Jacksonville School system. The site topography was the biggest challenge. The clearing of the trees and existing grade changes led to considerable site challenges that at the start of construction happened to be an extremely wet time of year.”

The design allows for a storm shelter adequately sized in the building that will support the current and additional students for a middle school in the future.

As for sustainability, Bowen said the new building design meets the ASHRAE 90.1-2009 International Energy Construction Code guidelines. She said, “Kitty Stone Elementary School is a testament of dedication by the City of Jacksonville schools to serve the community and its children for years to come.”