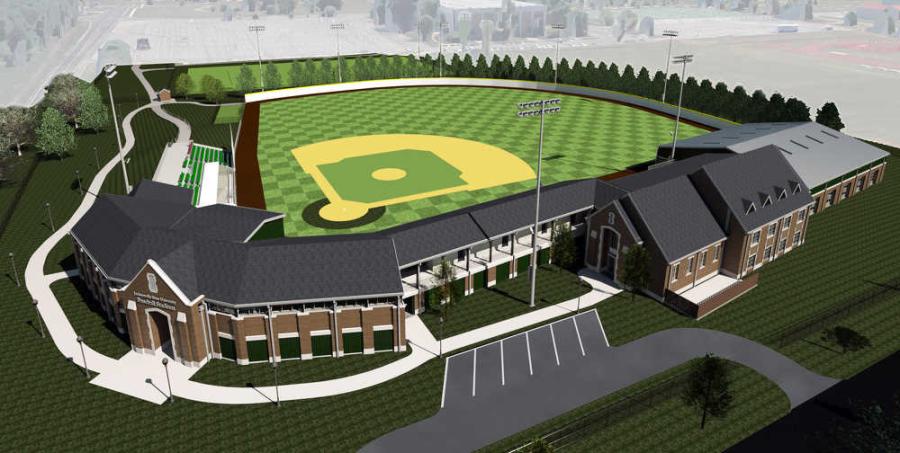 Students and alums of Jacksonville State University (JSU) may be focused on football for the next several months, but come spring, they'll be cheering on the Gamecocks baseball team in a new stadium. Construction on the $7.5 million facility in Jacksonville, Ala., began in early 2017, and will wrap up in time for the start of the 2018 season.

"It's very rewarding to see the progress of the stadium, and the anticipation for the facility is very high on campus," said Tony Schmidt, JSU assistant sports information director. "It will be a great asset to the already beautiful JSU campus, and will be one of the first facilities that people see as they enter campus."

The stadium will include 1,000 individual chair-back stadium seats with a roof canopy, new home and visitor dugouts, a new baseball clubhouse with a team meeting room, a locker room, coaches offices and an observation deck. Plans also include an enclosed batting facility, a new bullpen area, four VIP suites, a press and radio booth, concessions, a restroom and merchandise area. The highly anticipated project has been on the drawing board for quite some time.

"It's been in the work for many years, with the main funding for the project through fundraising and donors, said Schmidt, who added that passersby are taking note of the ongoing construction.

"People saw a lot demolition and dirt work in the beginning after tearing down the old facility A lot of the work has been brick and concrete."

The park is being built around the existing Rudy Abbott Field at the corner of Rudy Abbott Highway and Pennsylvania Avenue. Players have had to make adjustments, to accommodate the construction schedule.

"It's had an impact on the team. JSU had to play its 2016 home games at Choccolocco Park in Oxford, Alabama, and the Gamecocks were on the road for 36 of the 55 games in 2016, including the first 11 games on the road," said Schmidt. "Practice time has been difficult. JSU practiced in Oxford a lot during the 2016 season," said Schmidt.

According to Schmidt, the renovations will benefit the Gamecocks when it comes to attracting new talent.

"It will help immensely with recruiting, as it will be one of the best stadiums in Alabama and among the schools at our level."

Early in the summer, the program received a combined private gift of $2 million, the largest ever made to the university. The donation ignited a campaign for private funds to help finance the project.

"I cannot express how thankful we are to our lead-gift donors, president Beehler and the board of trustees for approving this very important project," said Greg Seitz, JSU director of athletics. "The new baseball facility will allow our team to continue to compete at the highest level, further demonstrating JSU Athletics' commitment to enhancing the experience of our student-athletes.

"This is an exciting time for our baseball program and for our Gamecocks community. This is the next step in the process, and puts us closer to having a state-of-the-art home for what is already a top-notch baseball program. We can't wait to see what this new stadium does for both the competitive and recruiting landscape of our program."

"The new stadium is going to mean so much to our baseball program," head coach Jim Case stated in a release. "It will provide our student-athletes with a first-class facility, while also improving the overall fan experience. Obviously, this will be a great recruiting attraction for our future student-athletes to help us to continue to have a championship program."

Former JSU baseball player Joe McGuire is gaining experience as part of the crew helping build the Gamecocks' new field, which is being constructed by general contractor Morris Building Constructors Inc. of Oxford, Ala. Patrick Kirk, vice president of Morris Building Constructors, said working on a new stadium around an existing baseball field is extremely challenging.

Construction on the new stadium is continuing at a steady pace. All foundation and first floor concrete and masonry walls are set. Dugout roof slabs have been placed, and demolition and site work are now complete. Among the key tasks yet to be carried out are the erection of steel and the placement of second floor slabs and masonry walls.

The condition of the job site prior to construction was less than ideal.

"We had to demo and remove existing structures, such as the batting cage, field house, locker room, press box and concession stand," said Kirk. "The site was relatively dry with stiff red clay. There were several areas of undercut required, once we removed topsoil and began to get the site to subgrade. Several large foundations were uncovered and had to be removed. Also, grading for this site was very tricky in that the building has several different elevations, not including ramps and an elevator pit."

As for the elements, "The weather has been extremely wet, and looks as if it will continue to be so," said Kirk, who noted that the first load of structural steel arrived in early September in the pouring rain brought on by Hurricane Irma.

The spectator grandstand with shade canopy calls for concrete foundations with steel raker beams topped with aluminum plank floor and steps with stadium seats with backs and arm rests. Kirk said the four VIP suites designed to entertain large groups with seating inside and outside are particularly impressive.

"These will be really nice. They feature top of the line finishes, including a drink rail and plush stadium seats with a clear view of the first base side."

The new press box, which will offer radio and television broadcast booths and a game operations center, will require concrete foundations with masonry walls supporting steel joist and deck. They involve mainly drywall construction finishes. The completed dugouts called for concrete floor slab with trench drains for wash down, a concrete foundation wall to playing field elevation and a concrete roof slab tapered for line of site from within the dugout and for the roof slope.

Kirk said construction of the clubhouse and enclosed training facility is fairly routine, with concrete foundation and slab on grade, and steel framing for the second floor slab on deck.

"The new batting practice facility will be state-of-the-art. It will house four batting cages and one golf driving range. The building will be built to accommodate any combination of batting cages and/ or driving range with the use of removable, or sliding, mesh partitions. The entire building may be free of partitions to allow for indoor infield practice. With artificial turf flooring and overhead doors open for an open air feel, it will be like playing baseball in the shade."

According to Jim Hartsell, vice president, director of architecture of Birmingham-based Davis Architects, the vision was to help create a memorable player and fan experience that fits in with the overall campus architecture.

"It's also the gateway to the western entry to campus, so it was important that the stadium have a strong presence on Highway 204. This will be the baseball team's home. Coach Case wants them to spend as much time in this facility as possible. It was important to create amenities like a study room and nice player's lounge so the athletes will want to spend a lot of time in the building. These amenities are also a great recruiting tool for the coaches when they bring in prospects to visit."

Hartsell said staying within a certain price range has been the biggest issue on the project.

"The construction industry has seen a unusually high spike in costs in the last year or so. It's always a challenge to balance the needs of the owner and the project budget. Having said that, JSU has been great to work with on trying to get the best project they can for their budget. I think it will ultimately be the best stadium in the conference."

For the creative team, it was crucial to anticipate and meet the needs of those who turn out for the games.

"We were trying to create an intimate fan experience and get the spectators as close to the action as possible. The canopy helps with providing shade for the spectators. It was also important to have the roof canopy to create the visual 'JSU' look we were trying to achieve. And the broadcast amenities are greatly enhanced from what was available in the old stadium."

Concern for the environment was another consideration.

"We try to incorporate sustainable materials and practices into our projects as much as possible. The use of local materials and materials with recycled content are part of our specifications."

As for dealing with the inevitable wear and tear associated with a stadium, said Hartsell, "We use durable materials like brick and concrete block. We try to specify materials that are as low maintenance as possible."

Hartsell noted that designing sports facilities in general is different from other projects, as far as the experience of the fans and the players, as well as what drives the design.

"You want fans to enjoy the facility so they will keep coming back. Also, athletic facilities are recruiting tools for universities. We always keep that in mind during the design process."

The firm has extensive experience creating athletic projects within the state of Alabama and throughout the Southeast, which Hartsell considers a major selling point.

"To have this background gives us the confidence to make the correct design decisions. We've completed single projects in excess of $75 million, but we have also completed numerous smaller athletic facility projects. That type of experience is invaluable in any athletic project, which are almost always complex in nature. Jacksonville State is a great university, with an incredible athletic history. To be able to bring all our past experience to the table to help them create this stadium is something we are very proud of as a firm."

Hartsell said playing a role in the stadium project has been an amazing opportunity for him and his colleagues.

"It's a dream for an architect to work with people who are so excited about getting a new facility like Coach Case and Athletic Director Seitz. To be able to help them bring their dreams to reality is the best thing about working on design projects like this."