Japan Resumes Work at Disputed Site for U.S. Base Relocation 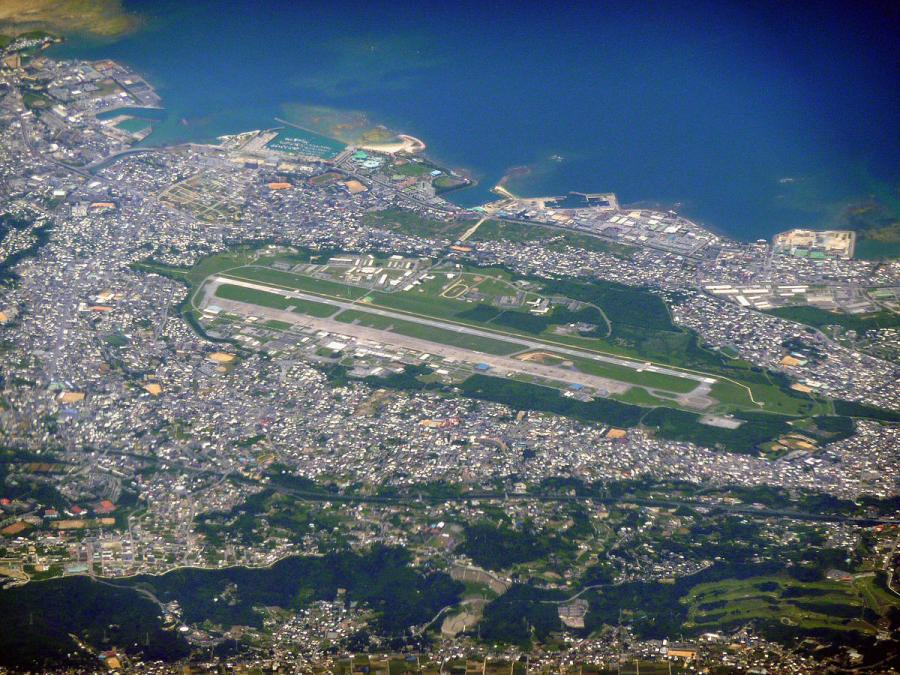 At the center of contention is a decades-old plan to move a Marine Corps air station from densely populated Futenma in the southern part of the island to less-crowded Henoko on the east coast.

TOKYO (AP) — Japan's central government resumed work at a disputed U.S. military base relocation site on Nov. 1, even though Okinawa residents overwhelmingly see the project as an undemocratic imposition on the small southern island.

The initial stage of landfill work at Henoko on Okinawa's east coast resumed the morning of Nov. 1, following the central government's decision this week to reverse Okinawa's earlier ban on landfill work at the site, said Satoshi Shirakata, a spokesman at the Okinawa Defense Bureau overseeing the project.

Construction workers were setting up floats using a crane to mark the designated landfill area, making it off-limits to the public, Shirakata said. Opponents gathered in paddle boats nearby, while Coast Guard patrol boats blocked them from reaching the site, and dozens of other demonstrators rallied outside a nearby U.S. base to protest.

Okinawa Gov. Denny Tamaki said it was "extremely regrettable" the central government forced its way just weeks after he proposed dialogue with Prime Minister Shinzo Abe and other officials in Tokyo. He said he was seeking another meeting with Abe.

Tamaki also said Okinawa was considering taking the case to a government-commissioned arbitration committee of outside experts.

"It's extremely regrettable," he said in a statement. "I will consistently urge the central government to sincerely listen to Okinawa's voice and take a democratic stance by seeking a settlement through dialogue but not by bulldozing the construction."

At the center of contention is a decades-old plan to move a Marine Corps air station from densely populated Futenma in the southern part of the island to less-crowded Henoko on the east coast.

Many Okinawans say the presence of so many U.S. troops on the island is burdensome already and they want the existing Futenma air station closed and its replacement moved off the island entirely.

Tamaki, who took office a month ago, has urged Abe and other top officials to stop the Henoko plan and reduce Okinawa's burdens.

In an interview with The Associated Press on Wednesday, Tamaki said the central government was not giving due consideration to other options.

"They say Henoko is the only one, Henoko is the only solution. But we think that it is definitely not the case and that they're refusing to think critically," the governor said. "The American side has made multiple proposals under reorganization plans and the Japanese government should consider them."

Washington's position is that the dispute should be resolved between Tokyo and Okinawa. Tamaki told the AP he will travel to the U.S. later this month to gain support from Americans on the issue. He said both Japan and the U.S. should listen to the voice of Okinawans.

Tamaki was elected on his campaign promises to block the Henoko base and further reduce U.S. bases on the island. He is the first person with an American parent to lead the island, which was occupied by the U.S. longer than the rest of Japan after World War II. He said he wants to encourage dialogue and bridge the gap on the issue.

The work begun Nov. 1, is preparation for a coastal embankment to be built at the bay ahead of full-fledged landfill work. When completed, the air station will include land reclaimed from Henoko Bay.

Chief Cabinet Secretary Yoshihide Suga told a regular news conference that the timing of sediment filling has not been decided. The Defense Ministry says the base with planned V-shape runways is set to complete in 2022.

Okinawan officials have filed injunction requests to stop the process in the past. Such filings could temporarily stop the work but are overturned as the central government's decisions take precedence.

The relocation of Futenma air station was planned after the 1995 rape of a schoolgirl in which three U.S. servicemen were convicted. The case ignited simmering Okinawan opposition to the U.S. bases.

About half of the 50,000 U.S. troops based in Japan under a bilateral security pact and the majority of their key facilities are on Okinawa. Residents have long complained about base-related noise, pollution and crime.

Tamaki has said he supports the Japan-U.S. security alliance, but that Okinawa should not be the only one sacrificed.