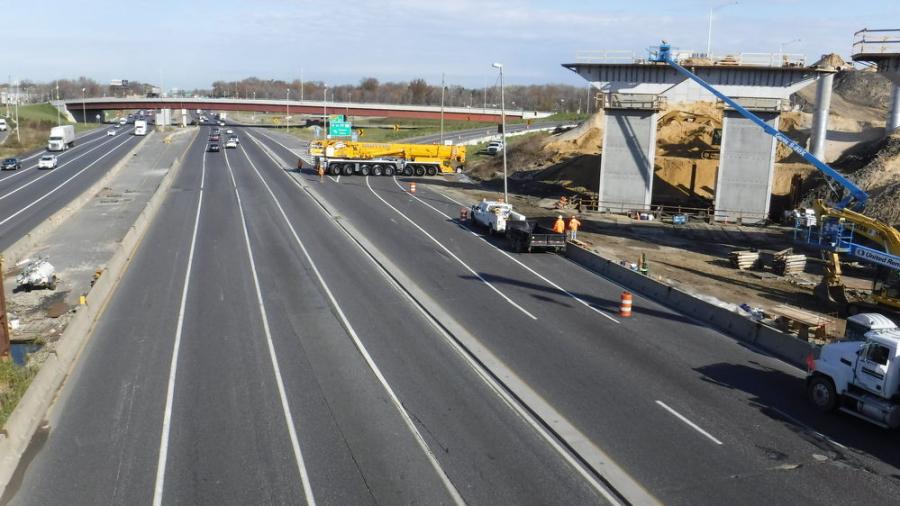 “The project consists of three major highways,” said Direct Connection Contract 3 project engineer Bill Gaus. “I-295, which is a major north-south interstate in New Jersey that parallels I-95, which goes through Philadelphia, and I-76, which turns into NJ Route 42, which is a major highway between southern New Jersey, including the southern Jersey Shore and Philadelphia.

In an effort to improve safety and reduce traffic congestion at the intersection of I-295, I-76 and Route 42, crews in Camden County, N.J., are hard at work on the multi-year Direct Connection project. Contract 3 work currently is under way, at a cost of $205 million. 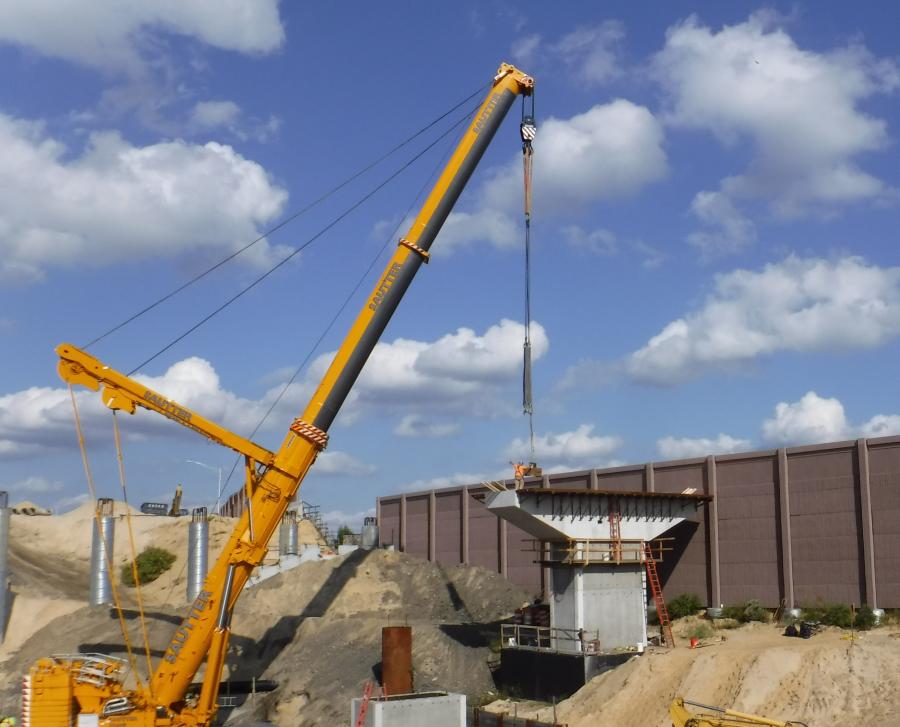 The overall project calls for improvements to several ramps, as well as the reconstruction of a number of bridges over I-295 and Route 42. The work will allow I-295 traffic to flow continuously without the need for using the current ramps with 35 mph speed limit. This means reduced congestion and improved safety by eliminating several weaving motions.

Because of the size and complexity of the project, it was split into four construction contracts. Construction began in the winter 2013 and is expected to be complete in 2027. When work under Contract 3 is completed, I-295 southbound traffic will begin using the new bridge, but I-295 northbound traffic will not do so until new ramps are built under the fourth and final contract.

"Work begins with temporary sheeting to support excavations. This allows for the construction of piles and drilled shafts on which we have cast-in-place foundations. The I-295 Bridge and Ramp A Bridge use pre-cast column segments and pre-cast pier caps on which continues a cast-in-place cap portion. Abutments are built directly on piles or drilled shafts with a pre-cast retaining wall. Steel girders are set on the abutments and piers, followed by the deck concrete."

The biggest challenge on the project is constructing a complex series of roads and bridges in a highly populated area with high traffic volumes. 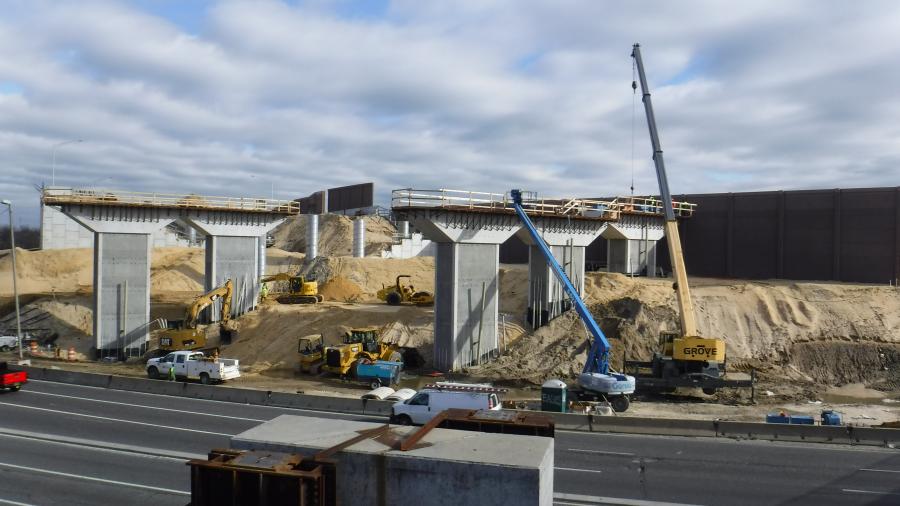 "This is a major commuter route with high volume, which sees even higher volume during the summer. To minimize the impact of construction, we are maintaining the same number of lanes throughout the life of the project because of the high traffic volume. Other challenges include coordination of the staged sequence work activities."

The main work taking place now is the delivery of pre-cast piers and assembling them in the field, and constructing abutments utilizing cast-in-place concrete and pre-cast modular retaining walls.

Work has started on the I-295 bridge and the ramp from Route 42 northbound to I-295 northbound. This includes work on abutments and a few piers. Many of the retaining walls, associated roadway construction and noise walls throughout the project limits have been completed. The abutments and center pier are complete for the temporary Browning Road Bridge. A majority of drainage work is complete, as well as most of the preliminary utility work on Browning Road.

As for tasks that have yet to be completed, NJDOT is in the process of securing additional work area needed for the temporary Browning Road bridge assembly.

"Once that is done, the temporary Browning Road Bridge over Route 42/I-76 can be installed," said Gaus. "The temporary bridge will allow the existing bridge to be demolished, additional road widening to commence, followed by the traffic shifts to allow for the remaining bridge work to start. Additional retaining and noise walls can also start." 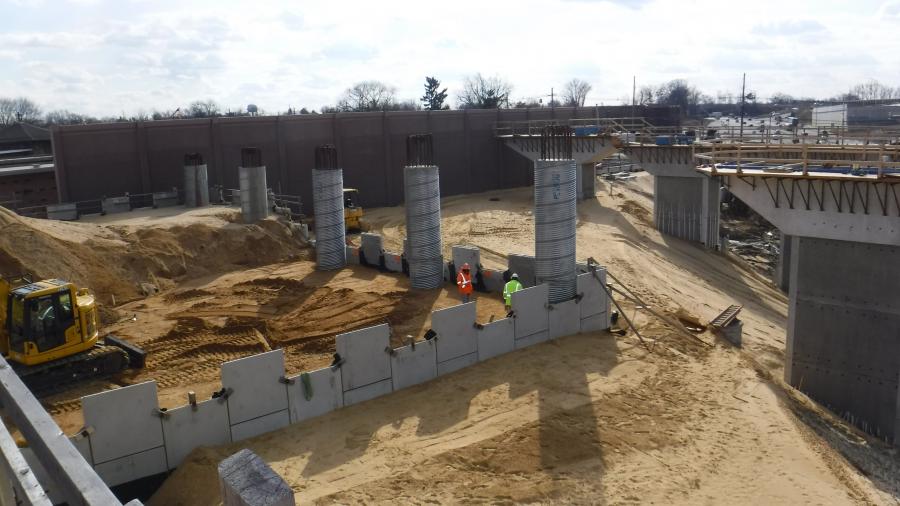 Drilled shafts were selected to limit vibration and noise, instead of driven piles, because of the proximity to adjacent homes, a church and cemetery. In addition, the project site has varied soil strata, so drilled shafts were chosen for the largest load-bearing foundations.

Approximately 250,000 cu. yds. is scheduled for excavation as part of Contract 3, with approximately 200,000 cu. yds. of embankment. The most time-consuming part of this phase of construction is completing the I-295 bridge over Route 42/I-76, because it must be carried out in several stages and requires traffic shifts to build the center piers. The department needs to maintain a minimum number of lanes in all directions at all times.

For the most part, the elements are not a factor. Only the coldest weather and large amounts of snow will slow construction.

The current phase of construction began in April 2017, and is expected to finish in late 2024. South State Inc. serves as the primary contractor for this work.