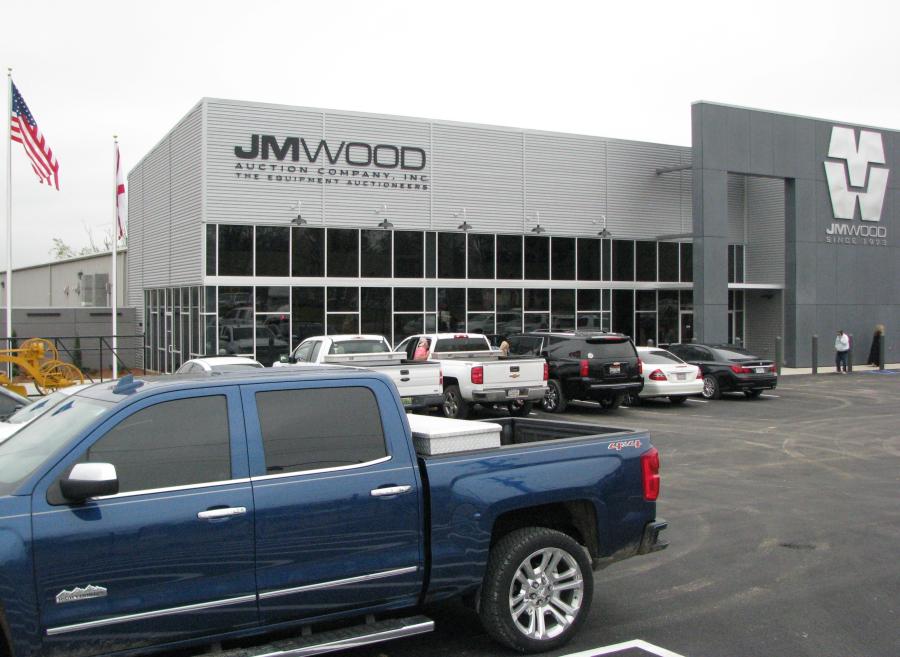 The newly expanded and renovated JM Wood Auction headquarters facility in Montgomery, Ala

After several months of undergoing a complete renovation and expansion of its headquarters facility in Montgomery, Ala., JM Wood Auction held a grand re-opening event March 13 on equipment preview day, just prior to the beginning of the company's four-day 44th annual spring sale from March 14 to 17.

According to the Wood family, this addition has been in the planning for approximately four years.

"This was all mother's idea [Brenda Wood] and was put on hold when she got sick and passed," said Russ Wood. "We just finished out her idea. This has been in the works for some time and completion is a dedication back to mother. She saw where we needed more space to accommodate our customers. It used to be kind of tight in this building on auction days and she wanted to provide the best environment possible for our customers."

• a more spacious entry area, with increased space for registration and check out;

• a Wi-Fi lounge area with phone charging stations, which also serves as a great place to watch the auction action in a quiet environment; and

• a new conference room that allows plenty of space for private meetings.

Improvements also extend to the exterior where a new machine check in/check out building was built and now includes automated systems and improvements in shipping and receiving systems.

The new addition has been completely wired for future technological upgrades, including kiosks and express registration. Proxibid kiosks also are on the drawing board.

The general contractor for this project was Central Contracting, based in Wetumpka, Ala., and the architect was Scarab Studios based in Montgomery, Ala.

According to Bryant Wood, "the customers were the driving force behind this project because most of the square footage is customer oriented."

More than 400 friends and guests from all over the country attended the grand re-opening event to enjoy the day's activities, as well as a barbeque lunch with their colleagues.

John Flora, an original JM Wood Auction staff member stopped by to celebrate with his former company. Flora was a pioneer in starting the auction results books with the regular printing of "Auction Action" in the mid 1970s, which was eventually combined with "Last Bid."

Flora reflected on his experiences in the auction industry and spoke about how much has changed over the years.

"There have been lots of changes, including the amount of equipment you can get in a sale," he said. "Back in the day, you just had to 'beat the roads down' trying to get people to put something in the sale. That's all changed so much."

The number of competitors in the auction industry has changed, too, he added.

"Long ago, when I started out in this business working with Thorpe Auction Company out of Wisconsin, there seemed to be only two leaders in the heavy equipment auction business: Thorpe and Forke Brothers."

JM Wood Auction was founded by J. Malcolm and Brenda Wood in 1973. Flora joined the company soon after and said that he appreciated family business culture, which extended to its employees. "And it's always been like that ever since," he said.

Last year (2016) was a record year for JM Wood Auction and the outlook for 2017 is just as bright, according to the Wood family. "The buzz is that everyone has work to do and lenders are busy financing machines. This in itself points toward complete industry optimism and prosperity." —CEG