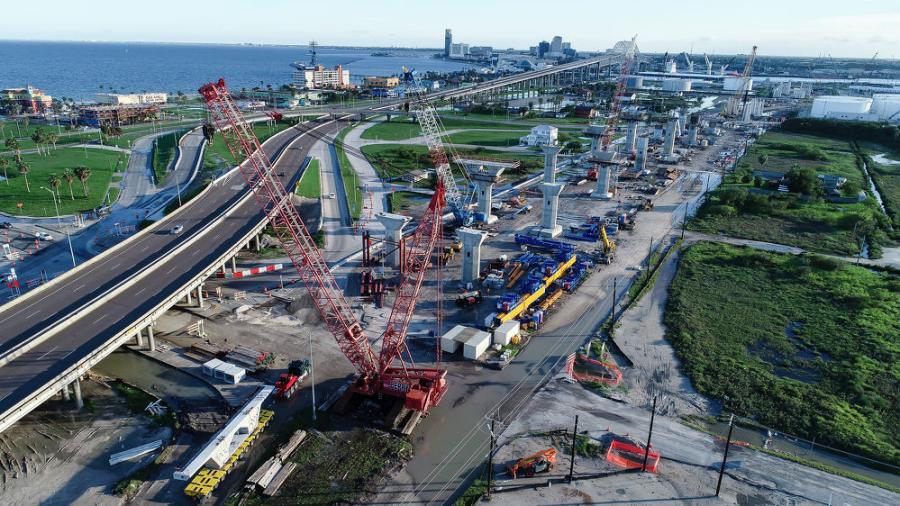 Column work on the approaches is a significant component and there are 101 approach columns, made up of 88 main lane northbound and southbound columns and 13 ramp columns.

The JV has not released a new timeline as the new engineer of record (EOR), Arup-CFC, is still working to evaluate and recertify the original main span design. The release of a new completion timeline is expected in late spring. 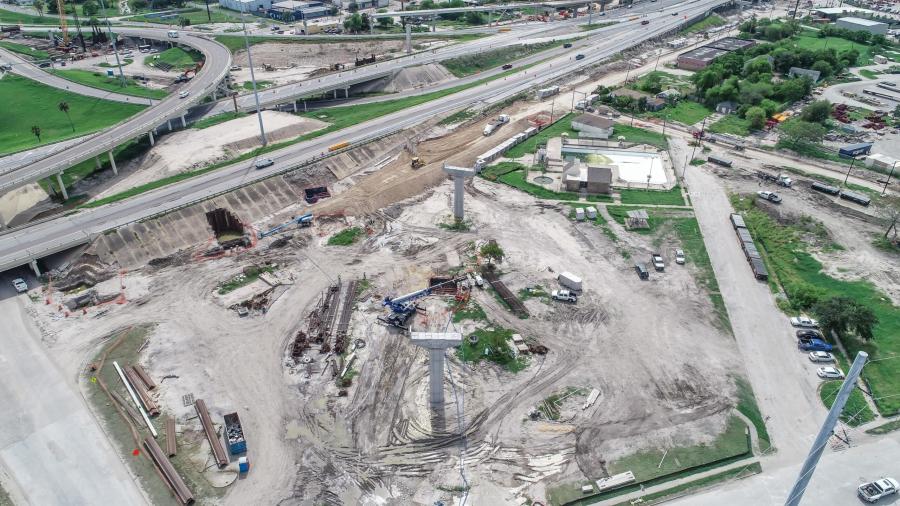 The HBP is replacing the existing Harbor Bridge (built in 1959) with a six-lane structure that has a median barrier and shoulders, along with a 10 ft.-wide shared-use path; and is reconstructing portions of U.S. 181, I-37 (1.6 mi.), and the Crosstown Expressway (1 mi.). It also includes the development, design, construction and maintenance of a total of 6.44 mi. of bridges and connecting roadways.

The original new bridge design incorporates a number of aesthetic features, including a community plaza, nighttime LED lighting and xeriscape landscaping. FDLLC does not anticipate any drastic or noticeable changes to the main span design once Arup-CFC completes its analysis.

The new cable stay, concrete-segmental bridge, the longest in the United States at 1,661 ft. long, will have a navigational clearance of 205 ft. and its main tower will be 538 ft. high. It has a projected lifespan of 170 years.

Thus far, the JV has completed several crucial benchmarks and, in December 2020, the pre cast yard reached the 97 percent complete benchmark on casting north and south approach segments. It is expected to reach 100 percent by the end of February 2021. By that same time frame, more than 55 percent of the overall project roadworks and structures will be completed.

The 2021 construction season will focus on roadworks and approaches.

The ongoing construction is extensive in scope and scale. In August 2020, the HBP team achieved one of the most significant milestones to date.

"The massive launching gantry crane and approach crews completed setting 34 spans, 17 northbound and 17 southbound spans that make up the north approach's superstructure," stated the monthly status report. "Each span is about 180 feet long and weighs over 2,000 tons. The remaining eight northernmost spans will be installed using the same falsework erection method utilized to set the first nine spans on the south approach."

The launching gantry crane weighs approximately 1,500 tons, which is about three times the combined weight of vehicles anticipated to cross the new bridge at any given time. 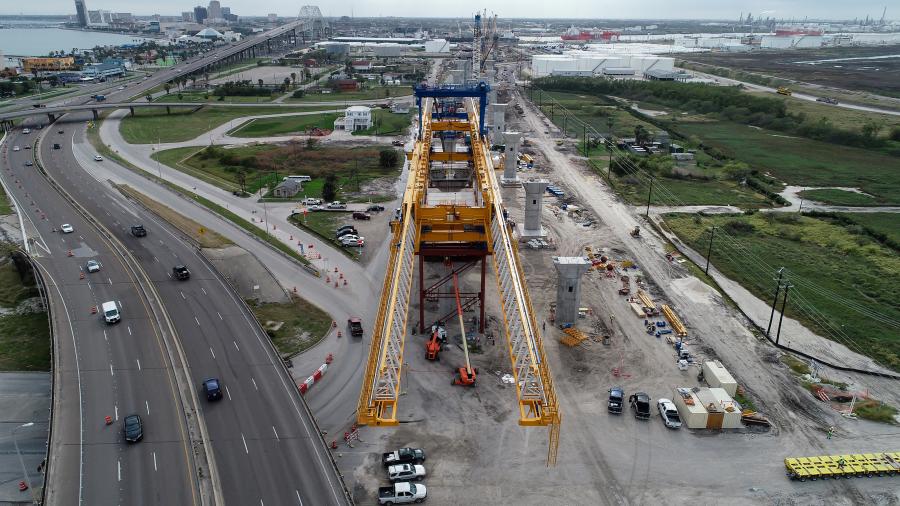 "It will take about 17 hours using self-propelled modular transports [SPMT's], semi-trailer trucks and a trailer with nine axles to move the larger pieces," it added. "The caravan will move about five miles per hour down the Joe Fulton Corridor, and southbound IH 37 to the staging area around Lake Street. The sheer size of these individual pieces makes it impossible to transport over the existing Harbor Bridge."

Groundwork preparation to stabilize and level the earth and place appropriate ground improvements are done with precision at the south approach staging area prior to the gantry arrival. Once gantry installation is completed, the horizontal crane measuring 550 ft. in total length will extend just past the 540 ft. of existing south approach spans.

"Reestablishing the gantry on top of the existing spans at the south approach will be a smooth process, thanks to surpassing the learning curve of initially assembling the gantry crane, which originally arrived from Italy in thousands of pieces inside 90 shipping containers," stated the report.

Approach column construction on the north and south approach columns, which makes up the bridge substructure, progressed at an impressive pace over the course of the last year.

Column work on the approaches is a significant component and there are 101 approach columns, made up of 88 main lane northbound and southbound columns and 13 ramp columns. Column types come in four different cross-sections with varying heights: Type I (8 by 14 ft.), Type II (12 by 14 ft.), Type III (14 by14 ft.), and Type IV (10 by 10 ft). The majority of these  columns are hollow, with the wall thickness reaching over 2 ft. of cast-in-place concrete. 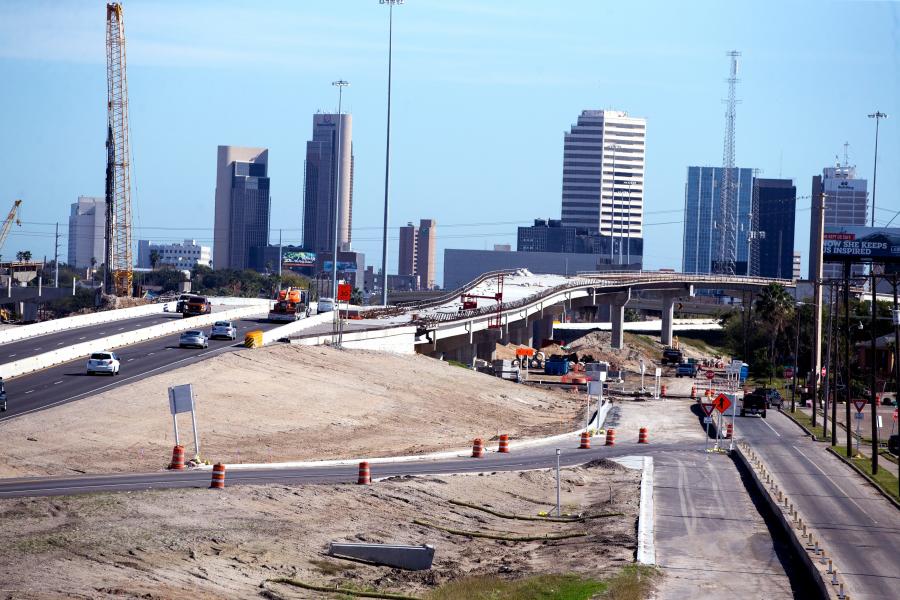 "We have more than 25 team members working on the approach columns, including craft workers, engineers and superintendents," stated the status report.

The approach columns start with a foundation made up of 2 by 2 by 110 ft.-long pre-stressed concrete piles driven approximately 100 ft. into the ground, and each foundation includes up to 28 piles. The fixed connection between foundation piles and footings consists of 18.5-in., high strength, post-tension, steel cables that protrude out of each of the pile, and these cables range from 48 to 84 in. long, depending on the size of the footing.

"Approach column heights vary from 14 feet to 179 feet and are built using a top-down design method," stated the report. "After the footing is complete, we begin pouring column lifts, which are 14 feet 9 inches in height except for the first starter lift. For instance, a column that is 133 feet in overall height will have eight column lifts that are 14 feet 9 inches tall each and a starter lift that is 15 feet tall. It is less cumbersome to build the first column lift with variable heights and then build the remaining lifts all the same uniform height to the underside of the pier cap. Lift height deviation is at the bottom of the column, i.e., the top-down design. The second or third lift of each column is built around a stainless steel door that will remain accessible for inspections throughout the life of the bridge.

"Unlike most roadway columns, approach columns are unique because they are hollow-designed and engineered like this to balance the weight of the concrete," it added. "Each column lift consists of 30 to 40 cubic yards of concrete, which are poured into formwork over a reinforced rebar cage. The formwork gets stripped off once the concrete is cured, and the exposed rebar cage is used to tie-in to the next lift. We are currently running six sets of column formwork on the HBP. These include crane-assisted and self-climbing formwork done by hydraulics, depending on the overall height of the columns. Crews build scaffolding to work on the column, which rises up with each lift for continued access. Once completed, a different team will come in and use the same scaffolding to build the pier caps."

In September 2020, all construction work associated with the HBP  involved detailed planning, coordination and approval from local, state and federal governing agencies for approximately three-quarters of an acre of the south approach sections, known as Spans 11S and 12S. "[This required] a complex design submittal with regard to the regulatory permitting needed to commence construction among wetlands and alongside industrial railroad tracks," stated the monthly status report.

"The six piers are under construction within 50 feet of an active rail line," stated the report. "As such, extensive planning and the submission of the Released for Construction [RFC] design drawings had to occur before the HBP could obtain the necessary permits and right-of-way access from Union Pacific Railroad to begin construction in the area. Over 100 HBP employees completed a UP safety training certification to access the work zone."

Bent 11S will coexist with temporary impacts to the palustrine emergent wetland, in addition to the railroad track. 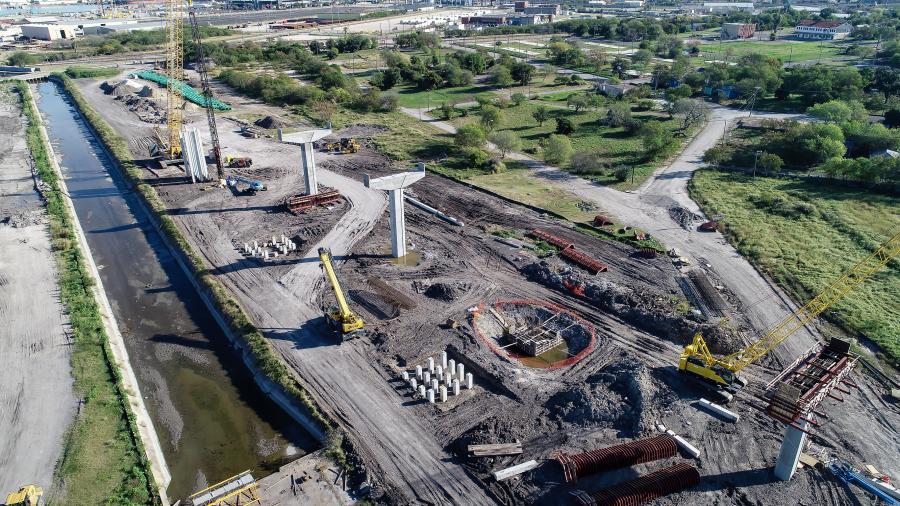 "This wetland area experiences seasonal flooding and primarily consists of non-tidal, freshwater, and a flowering plant species known as sea oxeye daisy," noted the report. "Extreme measures, including a Ph.D. Biologist on-site, are taken to temporarily relocate a portion of the soggy earth. Work impacting the wetland necessitates another layer of permitting and oversight from the U.S Army Corps of Engineers [USACE] before cofferdam excavation can begin for the pier foundations. The same USACE 404 permit for work in the wetland mitigation site also covers a temporary canal crossing consisting of crushed limestone, culvert pipes, and a timber crane mat.

"Extensive ground preparation is needed to move heavy equipment and cranes across two tidally-influenced [brackish water] canals to support the pier construction," it added, "Once the Bent 11S substructure is complete, disturbed earthworks will be restored to preexisting conditions, and the temporary canal crossing will be removed. The remaining permanent impact will be three south approach piers [Bent 11S] consisting of .008 acres."

In September, the newly reconstructed two-lane U.S. 181 Northbound Frontage Road opened for traffic along North Beach, and at the  same time, Burleson Street partially closed underneath U.S. 181 to facilitate the construction of future ramps and U.S. 181 improvements.

"Segments are being transported to the north approach section on a regular basis," stated the status report. "So far, [through December 2020] 937 segments have already been delivered, which allows the approach team to erect the spans at a good pace."

On the south side, between Whataburger Field and the Oveal Williams Senior Center, work was under way on the south approach with approximately 57 of the planned 59 footings having been poured.

"Additionally, a total 249 of the 285 column lifts have been completed and 32 of the 57 bent pier caps have been poured," stated a construction update. "Once the launching gantry crane has completed its work on the north side, it will be relocated to the south approach section." CEG