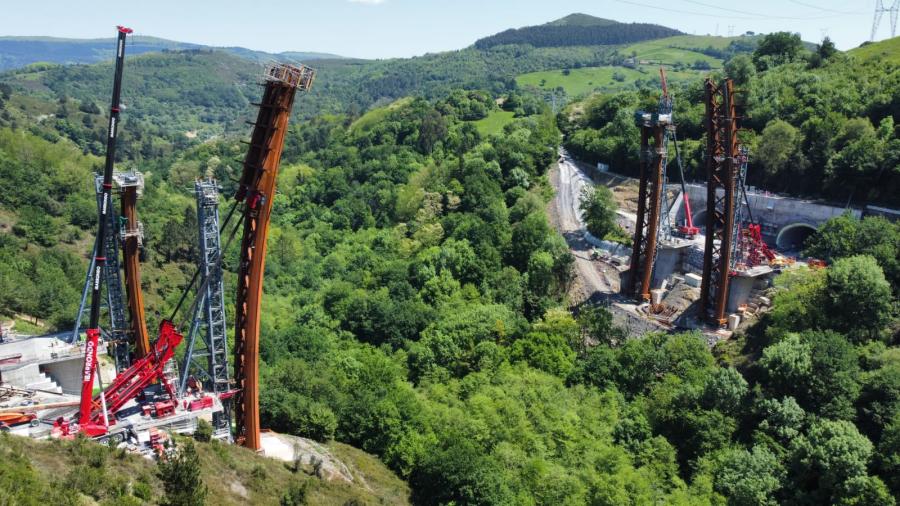 The Bolintxu valley is a protected area of natural beauty and ecological importance, and so the project needed to ensure that any structure crossing it not only had a minimal footprint but also avoided disrupting the area during installation.

The growth of Bilbao's port has been a real success story for Spain in recent years. But the increased traffic to and from the harbor had become a problem for the city's ageing roads and was leading to frequent congestion.

A new relief road was planned but required Mammoet's specialist help to construct while preserving the ecology along the route through the scenic Bolintxu valley.

Bilbao is established as one of Spain's busiest ports and has in the past two decades seen continued expansion with shipping traffic heading to Europe and further afield. But this, along with urban sprawl and increased vehicle usage across the city, has meant that some existing road infrastructure is struggling to cope.

High levels of congestion are common and so the regional government commissioned the new Supersur relief road to allow traffic bound for the port and the scenic coastline to avoid travelling through the city.

With much of the Supersur now complete, the final section to provide a seamless route around the outskirts of Bilbao required an impressive feat of engineering — the construction of twin viaducts spanning up to 531 ft. across the scenic Bolintxu valley to link road tunnels on each side.

But the length of these bridges was only the start of the challenge for project owner Interbiak and structural engineering consultants Arenas&Asociados.

The Bolintxu valley is a protected area of natural beauty and ecological importance, and so the project needed to ensure that any structure crossing it not only had a minimal footprint but also avoided disrupting the area during installation.

Alejandro Godoy, project manager at Arenas&Asociados said, "Interbiak stipulated, quite rightly, that the method of construction for the new bridges needed to take into account the potential impact on the natural environment as a primary concern. This meant that we had to explore alternative ways to solve this challenge, as a conventional approach would have been to use temporary scaffolding or support towers down in the valley.

"From the beginning we thought the lowering method could be an effective alternative. Being aware that Mammoet was able to deliver such operations, having seen their work at the Alconetar Arches Viaduct over the Tajo River and the Bolueta Arches over the Nervion River, for the City Metro of Bilbao, they were our first call to establish the best common approach." 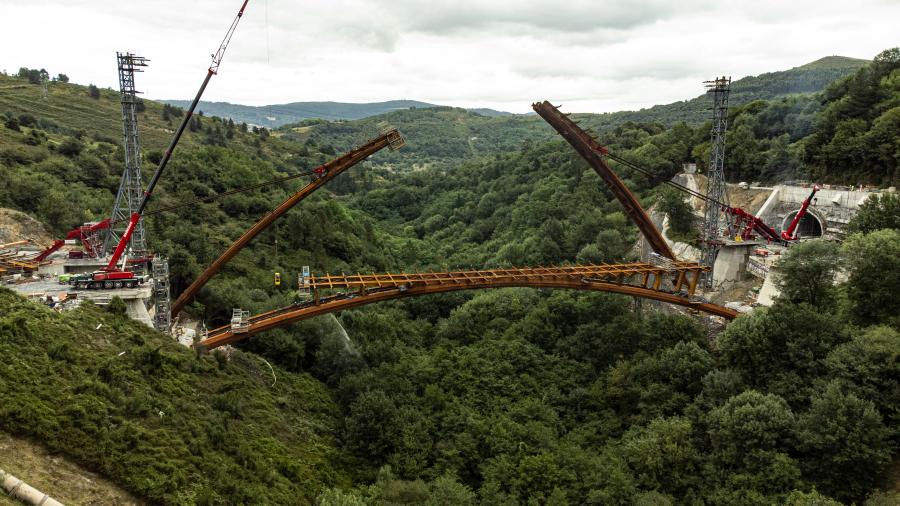 It was decided that the design of the bridges would each consist of an arch spanning the valley with supports only in the form of abutments on each side.

Discussions on finding a suitable solution began several years before the project was due to commence, with technical analysis and studies conducted to understand precisely what was possible within the geography of the area. It was decided that the design of the bridges would each consist of an arch spanning the valley with supports only in the form of abutments on each side. It was then up to Mammoet to propose the best solution to install them.

Veronica Arrayago, Mammoet project manager said, "Avoiding disruption to the river and the valley floor meant that we looked at how a swivel arch methodology could be used, which would allow construction of the bridges by lowering an arch segment from each side of the valley. Although this technique has been used a handful of times in recent decades, it is not common. Further, whilst similar bridge spans have been installed this way before, the weight of each arch section — up to 1,150 t — had not. So we were facing a landmark operation in every sense of the word to ensure the bridges were put into place safely and efficiently."

The approach would see each arch erected in two halves — one at each side of the ravine — before lowering and tilting them slowly to meet in the center. Each semiarch would be built upright, supported by a temporary scaffolding tower and mounted on top of a large swivel. Once both semiarches were completed, they would be simultaneously tilted down and lowered, rotating on their swivels in a smooth and controlled strand jack operation.

"We recognized that moving such large components would present a challenge and demand some of Mammoet's highest capacity strand jack equipment, especially as the final position of the bridges meant they would face very high tension loads," said Arrayago.

"However, we needed to be creative in the design of the equipment and where it was installed because the space between the tunnel openings and bridge abutments was extremely limited; the tunnels had to be used for tasks such as laying out strands as they were threaded into the jacking equipment. Furthermore, the tunnels were the only access route in and out of the site and would also be in use for other project workflows at the same time — so an extremely thorough plan across all phases was required in order for us to execute successfully."

The result was a methodology that allowed each semiarch to be moved directly from where it had been constructed onsite. Two bundles of steel cables were connected to an elevated section of each semiarch, which would then be moved via strand jack to lower the section. The strand jacks were to be mounted on tailored swiveled steel frames that had been fully engineered, designed, and manufactured by Mammoet for the project, and connected to a temporary foundation behind the abutment.

However, the massive forces that would be at play during the operation meant that multiple strand jacks would typically have been needed for each cable bundle, meaning additional steelwork, more groundwork and therefore more time and expense. Mammoet's unique equipment inventory proved key in avoiding this.

"Mammoet owns a number of 1250 t strand jacks, which are the largest in the world and unique to us having been custom designed to our specifications," Arrayago said. "They proved invaluable for the Bolintxu project as it allowed us to use fewer strand jacks for each arch, reducing time and cost for the client and making best use of the highly limited space on site."

The commencement of an operation of this kind is triggered by breaking the static balanced position of the semiarches when they are still connected to the temporary scaffolding towers used for their construction. For this purpose, Mammoet deployed six push-pull cylinders of 70.5 ton capacity behind each arch to generate the sufficient force for the semiarch to start its way down into the valley.

Each bridge took between two and three days to successfully install. The first day was spent completing the slow and careful equilibrium-breaking process, while the remaining time was used to lower the component smoothly until it was in place ready to connect to the opposite side. 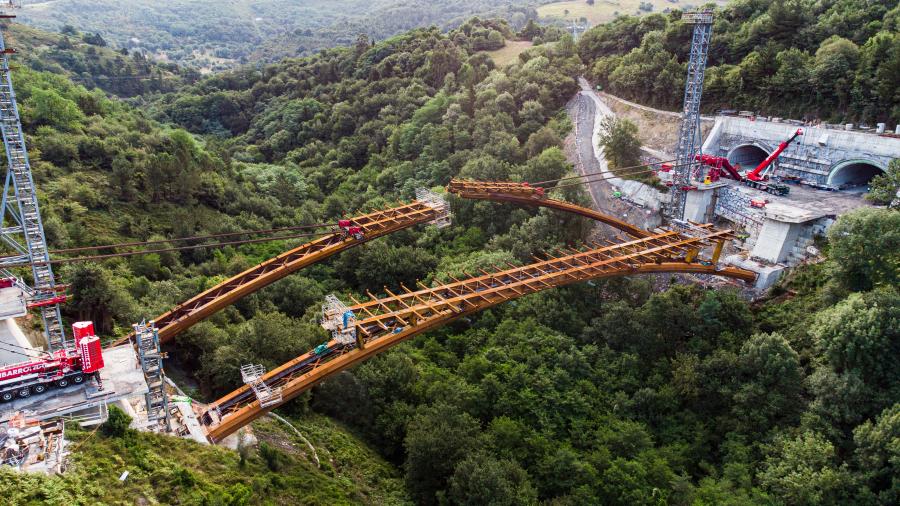 Once both semiarches were completed, they would be simultaneously tilted down and lowered, rotating on their swivels in a smooth and controlled strand jack operation.

The result is that the Supersur can now form a new, faster and less congested route that takes traffic away from the center of Bilbao. Critically, this has been done with minimal impact on the local environment and no disruption to the delicate ecology in the Bolintxu valley.

"We are delighted to have helped complete this landmark project, and importantly that with the help of Mammoet we were able to do so in a way that was compatible with the natural environment," Godoy said. "Mammoet's expertise in planning and executing the lowering operations, and their efficient access to the right specialist equipment, was crucial in making sure the work was completed safely, accurately and on time."