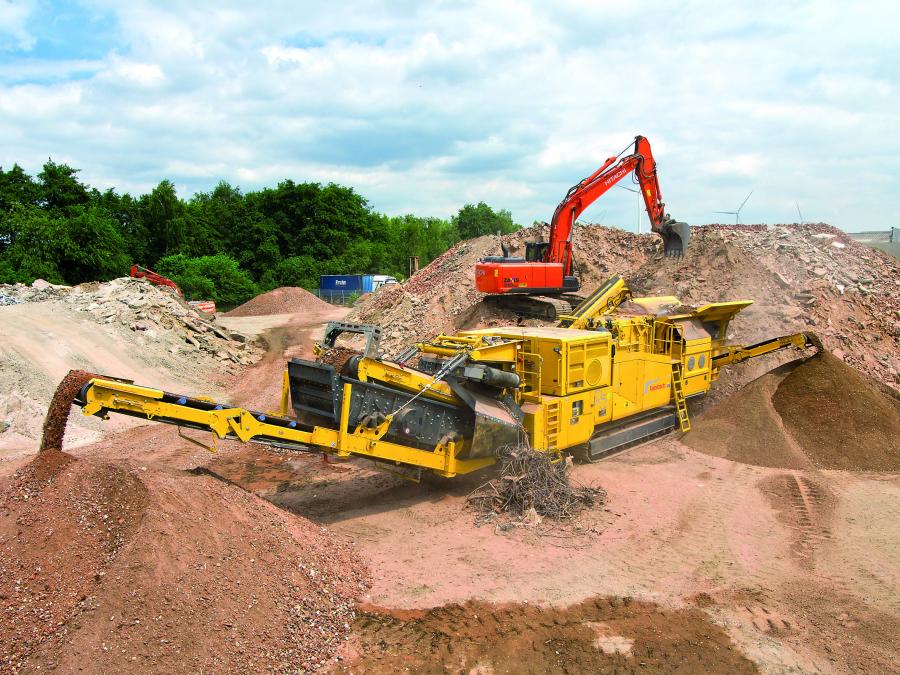 In its drive to reduce costs through the electrification of its track-mounted processing units, Keestrack is concentrating on hybrid crushing technology. Following fully hybrid H4 cone crushers and B4e jaw crushers, the company is now introducing the R5e hybrid impact crusher unit, designed to guarantee full capacity at low consumption costs with the aid of a directly driven 350 t/h crusher and electrical transport and screen components.

Keestrack's track-mounted impact crusher units comprises three models, starting with the compact R3, which is proving itself on the market as a highly flexible 33 ton (30 t) “construction-site crusher.”

Keestrack's top-range R6 flagship model has a total weight of 66 tons (60 t) when fully equipped and remains the most prominent machine among the 1300-impactors for recycling, large-scale projects and quarrying applications. Due to the licence-exempt dolly transport, it readily competes with the much heavier competition within the 450 t/h performance class. Moreover, the large-scale “Destroyer” unit has been available for several years as an R6e model in a diesel-electric hybrid version with electric motors driving the conveyor belts and screen components.

Since 2014, the Keestrack R6e has been available with a 250-kW electric motor for the crusher and an electric 110 kW drive for the on-board hydraulic system, and optionally also the all-electric plug-in operation from the mains. Due to a high-performance on-board diesel engine, the large-scale crushers remain highly flexible, while up to 45 percent of the energy costs can be saved even in semi-stationary operations.

Such an advantage also is directly reflected in Keestrack's sales figures: In 2016, 80 percent of the R6 machines were represented by diesel-electric or all-electric sales. This year, the total number units sold in 2016 was reached before the end of the first six months — 90 percent of these being in the form of hybrid or fully hybrid models.

The Keestrack R5 is a mid-range series of models with an approximate 42 ton (38 t) basic weight and a maximum 55 ton (50 t) with an overband magnet and double-deck final screen including oversize material recycler. Even when it was introduced more than three years ago, the mobility and production rate of the diesel-hydraulic crusher proved to be virtually unrivalled for its performance class — and now following a series of upgrades, Keestrack presents the R5e, a diesel-electric version of its 350 t/h all-round model.

A 160-KVa generator now supplies the power to all other conveyor systems — including the 175.5 cu ft. (5 cu m) vibrating feeder — and the new Keestrack Neodym overbelt magnets (option). On the basis of the anticipated higher mobility compared to the R6e, the Keestrack R5e does not offer plug-in network operation, but can drive the subsequently connected screens or stockpile conveyors (approx. 38 kW connected load) via the 63 A supply.

With a total additional weight of 1,102 lb. (500 kg) compared to the diesel-hydraulic version, the electrical unit guarantees the full mobility of the Keestrack R5e, which also is available with an optional dolly trailer chassis (transport height/width with final screen: 4000/3000 mm).

The hybrid unit can be deployed just as quickly at the building site: All conveyors and additional modules can be configured without lengthy additional assembly work or support, the sequential automatic starter of the Relytec control unit is responsible for starting up the system components. The system uses load and level sensors to optimise production rate and quality during operations. All system functions can be controlled by radio remote as a standard, the optional Keestrack-er GPS/UMTS monitor precisely documents all functions and provides information on potential malfunctions or required maintenance work.

Practical tests have demonstrated a considerable decrease in fuel consumption of up to 45 percent compared to diesel-hydraulic models, mainly due to a more even rotational speed of the high-torque Volvo diesel engine (max. 2380 Nm at 1200 rpm). Fundamentally, the extensive reduction of complex hydraulic lines results in lower cooling requirements, lower risks of leakage and clearly lower maintenance demands during everyday operations.