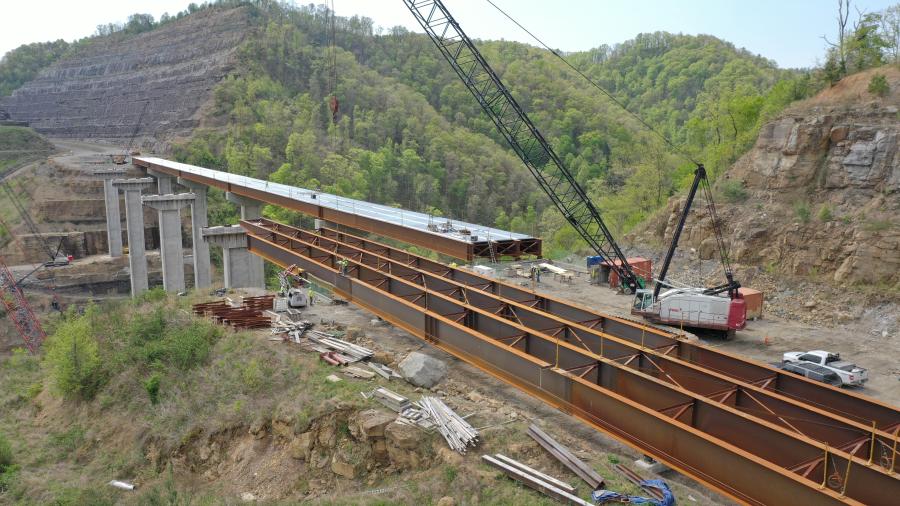 At 324 ft., the twin-span Pond Creek Bridge stands higher than the Statue of Liberty, with workers ever mindful of the steep slopes and county road below. (Kentucky Transportation Cabinet photo)

Despite dealing with rugged mountain terrain and a tight construction site, crews in Pike County, Ky., are on schedule as they build the state's tallest bridge. At 324 ft., the twin-span Pond Creek Bridge stands higher than the Statue of Liberty, with workers ever mindful of the steep slopes and county road below.

"The challenge here is maintaining positive drainage and being watchful for any slides or slips that may occur along the slopes, so they can be taken care of quickly," said engineer Vincent Hayes, Kentucky Transportation Cabinet (KYTC) construction project manager. "We have had several of these throughout construction." 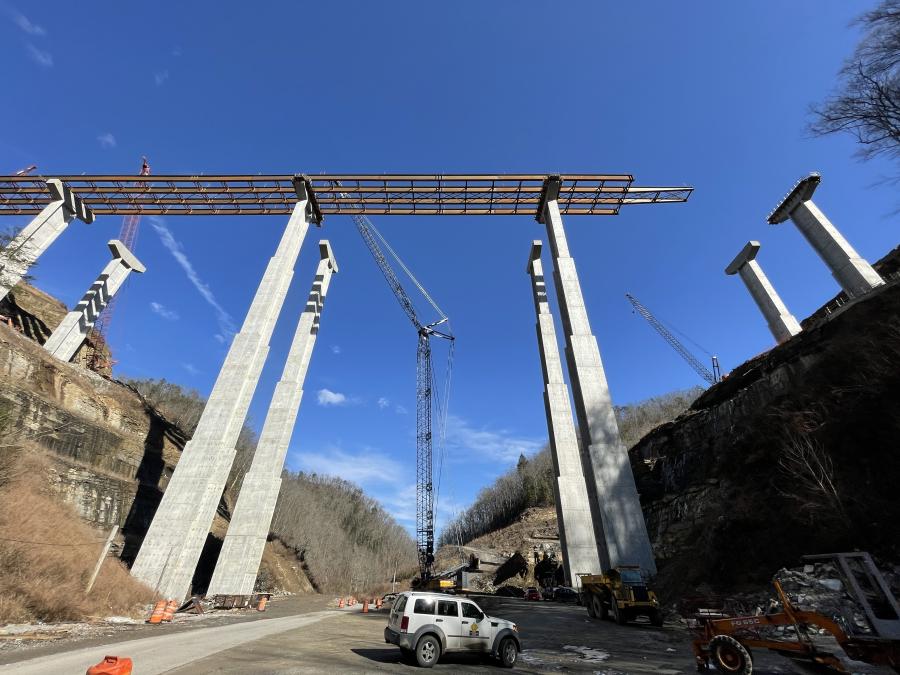 Work on the $27 million bridge project began in 2017 and has a completion date of early 2024. The ongoing effort is part of the lengthy U.S. 460 reconstruction project, which calls for a new, partially controlled access highway that will increase travel speeds and reduce travel time.

Shantana Woodward, KYTC public information officer, noted that now is the time to carry out the work, as Kentucky is on the brink of an economic growth spurt. Officials want to make sure the state has the means to attract commerce and industry.

"The U.S. 460 corridor is part of the Appalachian Development Highway System, a massive investment by the 13-state Appalachian Regional Commission to open a historically isolated region of the country to development and commercial markets.

Bush & Burchett of Allen, Floyd County, serves as the contractor on the project, which was designed by Palmer Engineering of Winchester, Ky. The work is federally funded through the Appalachian Regional Commission's Appalachian Development Highway Program.

Bush & Burchett worked with Engineered Rigging to employ the incremental bridge launching method to build the steel bridge on the embankment. An on-site technician operated a strand jack system with Hilman rollers. As construction of one section of girders was completed in the launch bay, the strand jack system was used to pull it onto the bridge pier, which allowed the next section of the bridge to be constructed on the embankment.

According to company co-founder Paul Burchett, "This was the first time a girder launch has ever been performed in Kentucky, and I was glad to be a part of it. We would use the approach again if the conditions called for it. The designer, Stantec [led by David Depp], Engineered Rigging and the inspectors with KYTC did a great job of working with us to make this happen."

Roughly 216,000 cu. yds. of material was required to construct the bridge, which is 1,000 ft. long. Hayes said building in less-than-ideal conditions was a definite challenge for crews.

"The difficulty of this is what led to the launching of the beams from above," said Hayes. "We did not feel the valley down below [the county road leading to the project] was wide enough to get a crane that was capable of setting beams at this height to the project location."

The 16.7-mi. corridor from U.S. 23 at Sookey's Creek, south of Pikeville, to the Virginia line features five excess material sites that include Wolfpit, Jessie Branch, John Moore Branch, Stonecoal Fork and Wolfpen (near the state line). These areas will be deeded to the Pike County Fiscal Court for use as economic development sites. 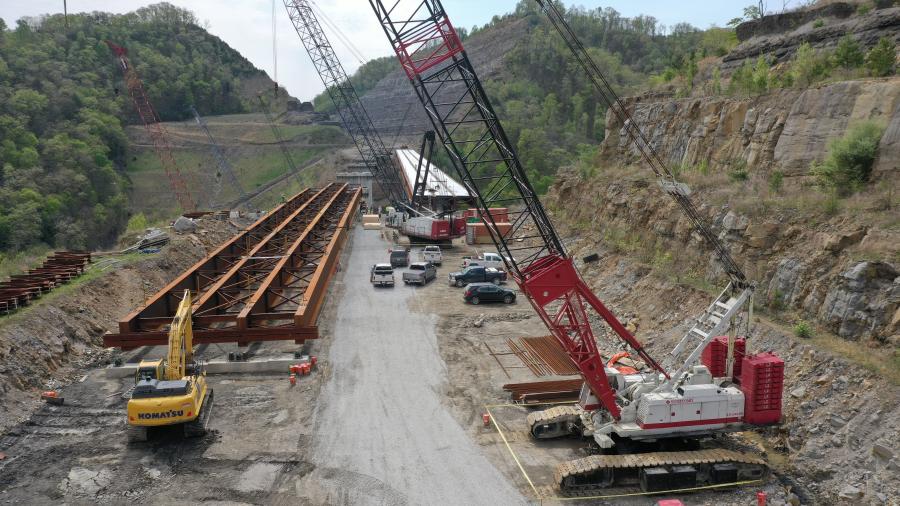 As for the elements, "Weather has affected us throughout the project, from the high temperatures in the summer months that prevent us from pouring the Class D-modified concrete on 90+ degree days, to cold days keeping us from pouring any concrete, to rainy days holding up most any task," said Hayes, who is proud to be part of the undertaking.

"It's been truly neat to see this project come together from the ground up. The majority of it is behind us. We just have to put the finishing touches on over the next year, which will allow us to reflect on what it took to get to this point, also while looking ahead to the future of eastern Kentucky."

"This has been the highlight of my career," said John Michael Johnson, KYTC pre-construction project manager. "I've been working on this project for more than 22 years, and to see it develop from a line on a page to being constructed has been amazing." CEG