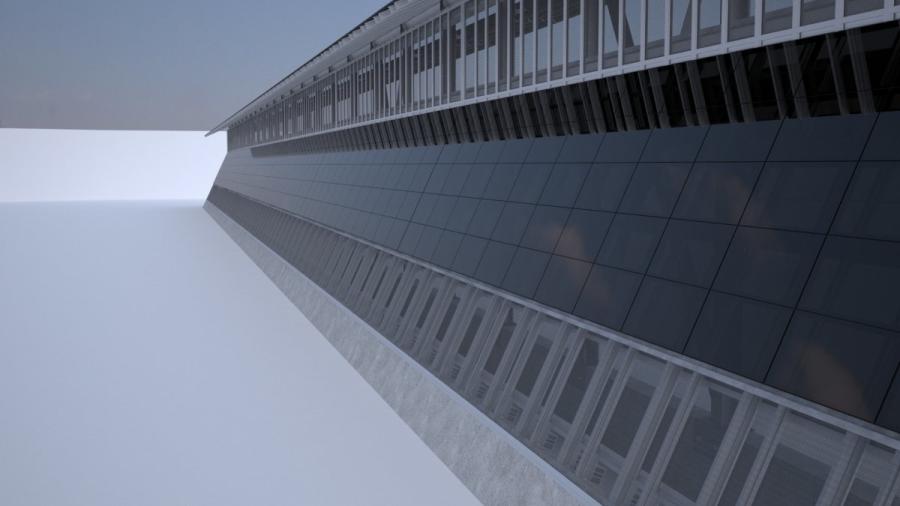 While the bottom of the wall would still be built out of stone, the solar panels situated on the Mexico-facing side would be double tiered, with the upper layer moving to capture maximum sunlight. (Gleason Partners LLC rendering)

President Trump has proposed using solar panels in the construction of a wall along the nearly 2,000-mile border separating Mexico and America — a key point in his election campaign. According to three individuals who have direct knowledge of the meeting with Republican leaders, Trump claimed he wanted to cover the wall segments with solar panels so they'd be “beautiful structures.”

Trump cited the wall's economic benefits as well as its environmental ones. Thomas Gleason, managing partner of Gleason Partners LLC, the company that proposed the design, told Business Insider that each solar panel on the wall would produce 2.0MWp per hour of electricity, and, because of this, the wall would pay off the cost of its construction in 20 years through the energy it sells.

The cost of solar panels has decreased rapidly over the past nine years, from around $8 per watt in 2009 to roughly $1.50 per watt in 2016, according to the Solar Energy Industries Association, and Gleason believes the cost will continue to diminish over time.

While the bottom of the wall would still be built out of stone, the solar panels situated on the Mexico-facing side would be double tiered, with the upper layer moving to capture maximum sunlight.

Though any wall between Mexico and the United States is likely to still be controversial, one equipped with solar panels would have benefits on both a small and large scale. It would provide those on both sides of the border, which is currently underserved by electricity companies, with greater access to power. On a larger scale, it would contribute to the amount of electricity the U.S. generates from clean energy sources, which would in turn contribute to fighting climate change.

Opinions on the proposal are split.

Wunder Capital CEO Bryan Birsic told Business Insider, “While we would prefer a different location and purpose for a large solar installation, we strongly support all additional generation of clean power in the U.S.”

Meanwhile, Nezar AlSayyad, a UC Berkeley professor of architecture and planning, told The Guardian that the wall was still “indefensible” and that “trying to embellish it with a technical function or a new utility … is a folly.” Political theorist Langdon Winner was even more outspoken in his criticism: “I'm wondering what the solar electricity would be used for? Electrocuting people who try to climb the wall?”

Although the wall itself is controversial, any move by the U.S. government to promote solar energy is positive as it would lessen the country's own carbon footprint and help the world combat climate change.