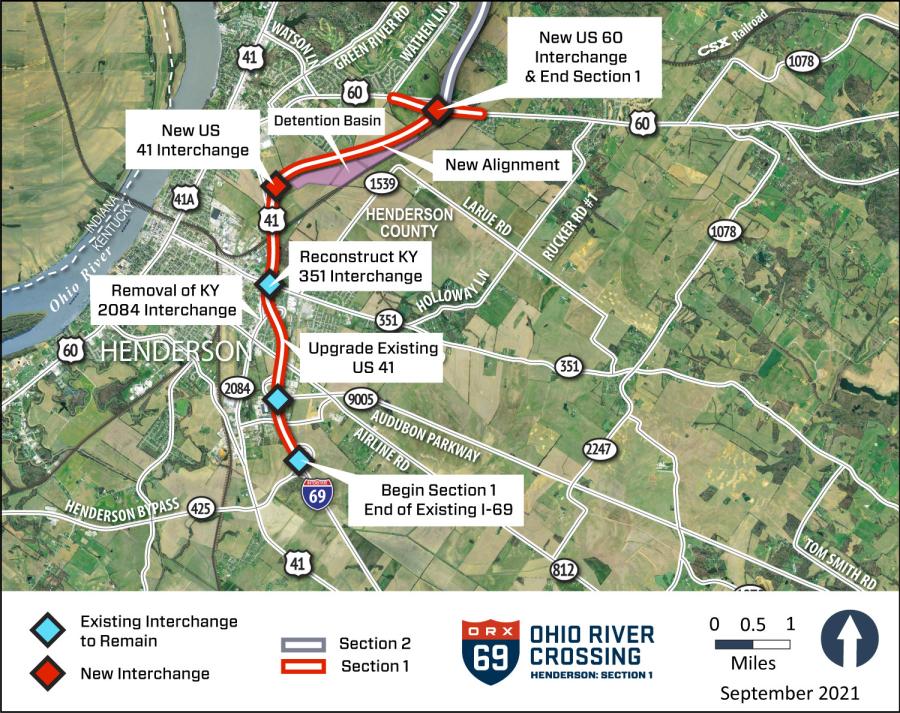 It's the final key step to move one of Gov. Andy Beshear's top-priority transportation projects to construction — Section 1 of the I-69 Ohio River Crossing (I-69 ORX) between Henderson and Evansville, Ind. A contract has been awarded to the Ragle Inc./Stantec Consulting Services Inc. design-build team. Construction is expected to begin in Henderson in early 2022.

"The past several days have been extremely difficult since tornadoes created so much loss for Kentuckians," said Beshear in a statement issued Dec. 21. "It's good to share some positive and important news. Many people in western Kentucky have championed an interstate river crossing for decades. Having a team in place to construct the Kentucky approach for the I-69 Ohio River Crossing is a major step forward. I look forward to construction in the spring and seeing the first pieces of this transformational project that will benefit so many take shape."

The Kentucky Transportation Cabinet (KYTC) is overseeing work on Section 1. KYTC has been reviewing and scoring proposals. Technical proposals were submitted in November and price proposals were opened in December. Ragle/Stantec was awarded the nearly $158 million construction contract after being identified as the apparent Best Value design-build team.

"These major projects are difference makers for our communities and our commonwealth," said Kentucky Transportation Secretary Jim Gray. "We're improving safety and mobility and the future I-69 Ohio River Crossing will mean new connections and opportunities for western Kentucky."

The environmental study for I-69 ORX was completed in September with a Record of Decision issued by the Federal Highway Administration.

I-69 ORX is divided into two sections for construction. I-69 ORX Section 2 is a bistate project between Kentucky and Indiana that will complete the I-69 connection from U.S. 60 in Henderson to I-69 in Evansville. It includes the new river crossing. Design is expected to begin in 2025 with construction anticipated to begin in 2027 and continue through 2031. Both states continue to look for opportunities to accelerate that timeline.