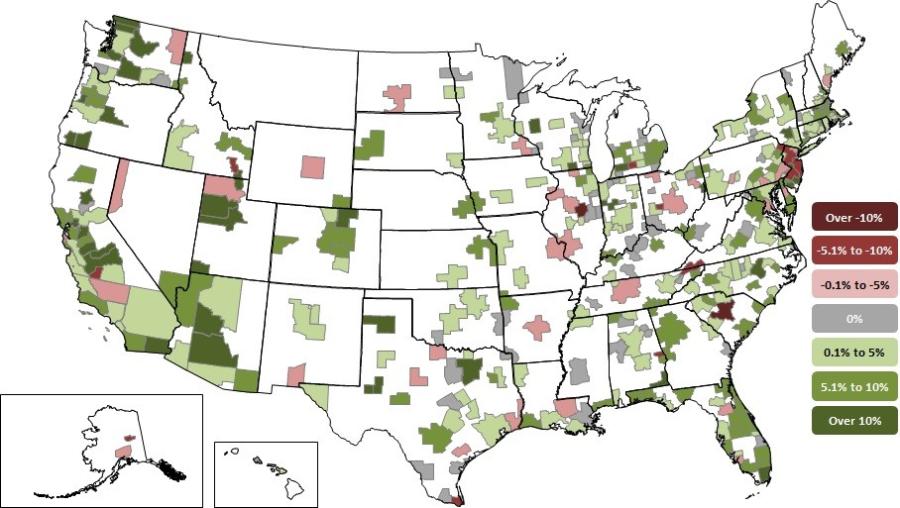 Construction employment increased in 263 (73 percent) out of 358 metro areas between May 2017 and May 2018, declined in 47 (13 percent) and was unchanged in 48, according to a new analysis of federal employment data released June 26 by the Associated General Contractors of America. Association officials warned that the supply of qualified workers is dwindling and urged members of Congress to support proposed legislation to reform, and increase funding for, the federal career and technical education program.

“The growth of industry employment in so many locations is good news, but it also highlights the challenge contractors face in finding qualified workers,” said Ken Simonson, the association's chief economist. “As more cities hit new highs in construction employment and new lows in unemployment, the risk is growing that some projects will be delayed for lack of workers.”

Construction employment in 63 areas was at a record high for May, in a history dating back to 1990 in most locations, the association's analysis showed. Nationally, the unemployment rate for jobseekers with prior construction experience was at the lowest May level since that series began in 2000, the economist noted.

Association officials urged Congress to enact proposed legislation to reform and increase funding for federal career and technical education programs, known as the Perkins Act. They noted that the Senate Health, Education, Labor & Pensions Committee is marking up the legislation today with strong support from both Republicans and Democrats.

“Construction firms in many parts of the country report they would likely add even more workers if they could find more qualified candidates,” said Stephen E. Sandherr, the association's chief executive officer. “Passing this new version of the Perkins Act will make it easier for educators to expose young adults to high-paying construction careers opportunities and lead to more hiring in many parts of the country.”