When finished, a water supply project under construction in Atlanta will not only be the largest ever undertaken in Georgia, but provide greater capacity than any other in the United States. 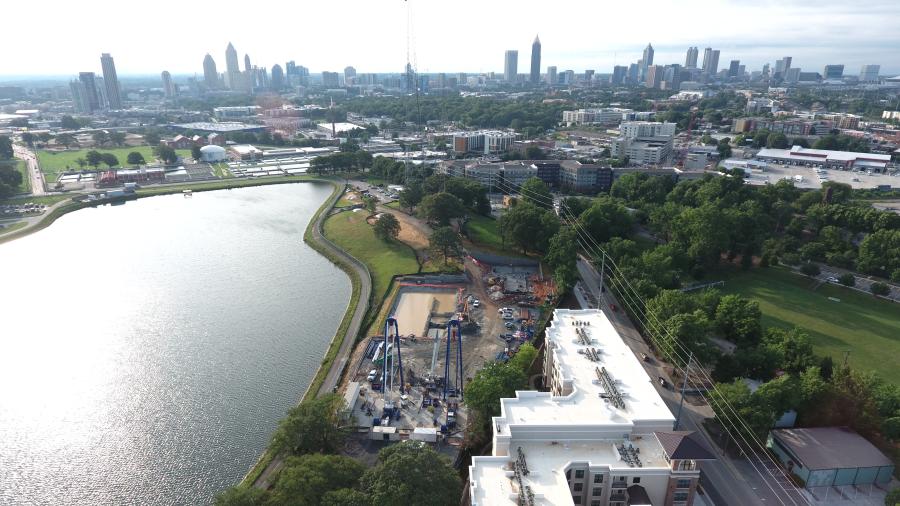 When finished, a water supply project under construction in Atlanta will not only be the largest ever undertaken in Georgia, but provide greater capacity than any other in the United States.

When finished, a water supply project under construction in Atlanta will not only be the largest ever undertaken in Georgia, but provide greater capacity than any other in the United States. It also is the site of a unique drilling technique never before utilized on the east coast.

The $300 million project is Atlanta's effort to provide water for the city during times of drought, an all too frequent condition in the southern city. It involves converting the 400-ft. deep Bellwood rock quarry to a 30-day, 2.4 billion gal. water storage supply facility and connecting it through a 5 mi. tunnel to the Chattahoochee River and the Hemphill Water Treatment Plants. Atlanta will be the only city in the United States with a capability to store 30 days of water, according to a press release from the city of Atlanta.

“The unique thing we are doing is called a blind bore,” said Brian Walker, vice president of water and waste of PC Construction Company, headquartered in Burlington, Vt. “Typically when you do these pump stations you put your tunnel in and as you are going from the surface down, you dig down, blast out the rock and haul it out. With this blind bore method, we set up the drill rig, drill down 400 feet, and keep increasing the size of drill bit until the hole is the size we need for pumps to go down.

“Instead of the risk of blasting and mining out, we can do this all via the blind bore method. Here you are boring in the blind because you are just drilling a hole straight down into the earth. You have to make sure you are plum, straight up and down. Inside the shaft, there is a little pump, if the shaft is not plum, the pump would hit the side of the shaft. It affects the performance of the pump.

“We are doing it because of the schedule. Otherwise, we would have had to mine all the way to pump station, then build the shaft, however, with the blind bore operation, we are able to build the tunnel while doing the shaft construction.”

The 5-mi. tunnel to the river and treatment facilities is being built by “Driller Mike,” an $11.6 million tunnel boring machine built by Robbins. The TBM earned its moniker in a city-sponsored contest. It was named after Atlanta rapper and activist Michael “Killer Mike” Render.

Work on the tunnel got under way last fall, and is expected to continue through March 2018, the scheduled completion date.

“We have our launch pad for our tunnel boring machine in the bottom of the quarry,” Walker said. “We will build the tunnel to the pump station at the quarry site. It will allow the city to pull water from the river and to the quarry and to the treatment plants. They will pull water out and divert it to water plants and treat it and go out to the distribution system. They will keep the quarry full, but use the water gradually so it doesn't get stagnant. Otherwise it will be there for a drought.”

“Driller Mike” produces about a 10-ft. diameter tunnel in the hard rock. It travels about 60 ft. a day and is currently at 2,500 ft. The safety precautions are critical, Walker said. Air is pumped in, temporary lighting installed and gas and water are monitored. There also are chambers inside the tunnel where workers can get to a safe zone.

“As they mine the tunnel, the tunnel boring machine has arms that can drill in bolts that help secure the rock and cast in place a concrete liner that makes the tunnel,” Walker said. “Our tunnel bores out at 11.6 feet, and finishes at 10 feet when we put in the liner. The pump stations are on top of the shafts that connect to the tunnel. The pump stations end up 300 to 400 feet deep. The station is at grade, the pump extends down.”

"Water and wastewater infrastructure projects represent about 50 percent of PC Construction's current work load," said a PC Construction representative. The firm is 100-percent employee owned with offices on the east coast from Maine to Florida.

“We do a lot of water and waste water treatment projects,” Walker said. “This is a water supply project. It's similar to work we've done, but it has some unique elements, like the tunnel and blind bore.

“It's a critical project for the city. This is their water supply right now. If a drought were to happen, they need this water.”

The project is set to be fully completed in July 2019.