The word "ton" too often gets tossed around as a kind of hyperbole — as in, "We ate a ton of ice cream" or "She makes a ton of money."

In the construction industry, the word is used in its literal sense of 2,000 pounds, but even so, can sound too small for the amount of material under consideration.

Construction companies don't handle just one or two tons of material at a time. In any particular job, they may be required to move or process hundreds, or even thousands.

Recently, for example, in just three ordinary workdays, Larsen Dirtworks LLC of Foreston, Minn., crushed 780 tons of concrete curb and sidewalk, plus a little asphalt, for reuse as base material. It turned out to be a two-man job, although the two men — Larsen Dirtworks President Mark Larsen and his brother, Vice President Rich Larsen — multiplied their strength with a Cat 908M loader, a Case 160B excavator, a Case 55B excavator with a hammer attachment, and, most prominently, their brand-new EvoQuip Cobra 230R mobile impact crusher. 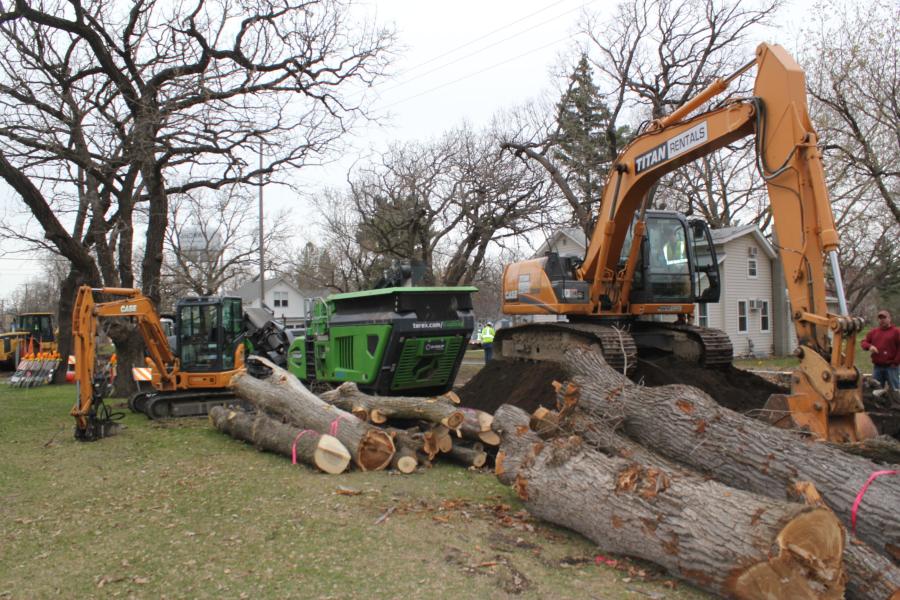 "We went down to Kentucky to EvoQuip's facility to demo this new Cobra 230R onsite mobile crusher," Rich Larsen said. "We knew this would be a perfect fit for what we wanted to do."

The sidewalk crushing job, which was part of a larger effort to replace water and sewer lines in a seven-block area of Anoka, was Larsen's first opportunity to use the Cobra, and despite the little extra time that is always needed for the initial learning curve, everything went smoothly, according to the brothers. They began work on the crushing April 24 and ended April 26, allowing other contractors to move in and complete the rest of the project on schedule.

The crushed material produced by the Cobra was stored on a city lot provided for the project, and then reused when the streets were repaved.

"It saves on trucking costs, material disposal and having to rebuy the same material needed later on in the project," said Travis Neyssen, president of Kamke Construction, Foley, Minn., subcontractor on the project. "It saves cost and time all across the board."

Kuechle Underground of Kimball, Minn., is the lead contractor and is performing all of the underground work on the project.

With a 43.7-ft. transport length and 8-ft. width, the Cobra is a versatile, easy-to-use mobile impact crusher that can handle such demanding applications such as reinforced concrete, recycled asphalt, construction and demolition waste and natural rock. Its 33 by 34-in. rotor diameter gives it an output potential of 275 tons per hour, and its integrated afterscreen system ensures the required product specification is achieved, with oversize material either stockpiled or recirculated back into the crusher.

"We are excited to be named the EvoQuip distributor for Minnesota and proud to be part of the dynamic and growing EvoQuip team," Ruffridge-Johnson President Dave Hosch said at the time of the announcement. "Ruffridge-Johnson's success depends on our continued commitment to product support, so we look forward to working in partnership with EvoQuip to offer the best solutions for our customers, and to growing the EvoQuip brand in the U.S."

Founded in 1936 and based in Minneapolis since the 1950s, Ruffridge-Johnson recently relocated to a facility in Centerville, Minn., north of Minneapolis.

Doug McDonald was the lead sales representative and contact for Larsen at Ruffridge-Johnson and helped the Larsens get their new unit up and running.