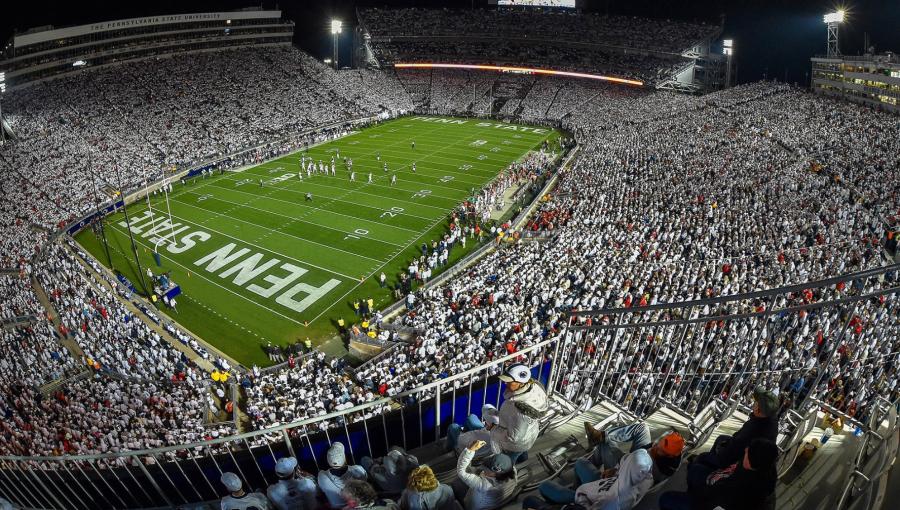 It might not be the big expansions and renovations fans are waiting for, but Penn State University's Beaver Stadium in State College is undergoing another exterior facelift this summer with some landscaping and sidewalk changes, primarily around Gate C.

The plans, which were originally approved by the College Township Council on April 7, have slowly started to take shape around Beaver Stadium, reported StateCollege.com, the town's online news source.

The current work involves installing an increased gate entry area with asphalt pavement at Gate C, along with a concrete walkway on the west side of the wall.

Landscaping will be performed along Porter Road and Curtin Roads with the removal of an earth mound and eight trees, along with a re-sodding of the area.

College Township Engineer Don Franson recently wrote a memo to the council saying, "The plan includes grading, removal of trees and expanded walkways to ensure the safety and ease of access for pedestrians."

The new construction is Penn State's next step in revamping Beaver Stadium, a major centerpiece of the university's planned 20-year overhaul of its campus sports facilities.

Sports Illustrated reported that Penn State does so, however, as it wrestles with how large a renovation project, and how much debt, should the college consider investing into the 106,572-seat stadium. Would some of that money be better spent on other athlete facilities instead, the magazine added.

Penn State continued to address those questions when it unveiled the next phase of its Beaver Stadium plan in 2021. The university and Populous Americas, the well-regarded architectural firm, based in Kansas City, Mo., agreed to a partnership to do a concept study to review the scope of the stadium's renovation plans.

The study is evaluating current and future required maintenance projects, possible renovation options and amenity needs to support Beaver Stadium. Penn State said the study is expected to last through this summer.

As part of the effort, Sports Illustrated noted that Penn State's athletic department will survey fans and community members for their input on long-range options for the stadium's future.

In a news release, Penn State said that, through the survey, it seeks to develop recommendations about "Beaver Stadium's near- and long-term maintenance needs, operational efficiencies, partnership opportunities, [and] improvements to the fan and student-athlete experience."

The study will continue Populous's extensive work with Penn State that began with 2017's Athletics Facilities Master Plan. The sweeping, 20-year project looked at more than two dozen venues, created a 45,000-sq.-ft. Center of Excellence and planned a major overhaul of the university's flagship sports venue.

Following the COVID outbreak in 2020, which closed Beaver Stadium to fans that season, the venue reopened in 2021, and the Nittany Lions football program reported a cumulative total of 747,595 ticketholders for seven home games. Those attendance figures were important, considering that Penn State reported a $23.9 million deficit in fiscal year 2021, due primarily to the pandemic.

With its revenue refreshed, and a potentially huge Big Ten media rights contract forthcoming, Penn State appears to be better positioned to embark on an enormous Beaver Stadium project than the past two years suggested, according to Sports Illustrated.

Penn State Needs to Fix What is Broken

The erector set that is Beaver Stadium needs infrastructure work, such as widening gates, ramps and concourses to smooth fan access to their seats. The bathrooms, too, are in desperate need of renovation.

Beaver Stadium, built in 1960 and expanded seven times since, is an iconic American college football facility that does not require a total overhaul, according to Sports Illustrated. But the needed structural updates and some nods to the future, such as improved Wi-Fi access for fans at the stadium, should serve Penn State football well for decades to come.