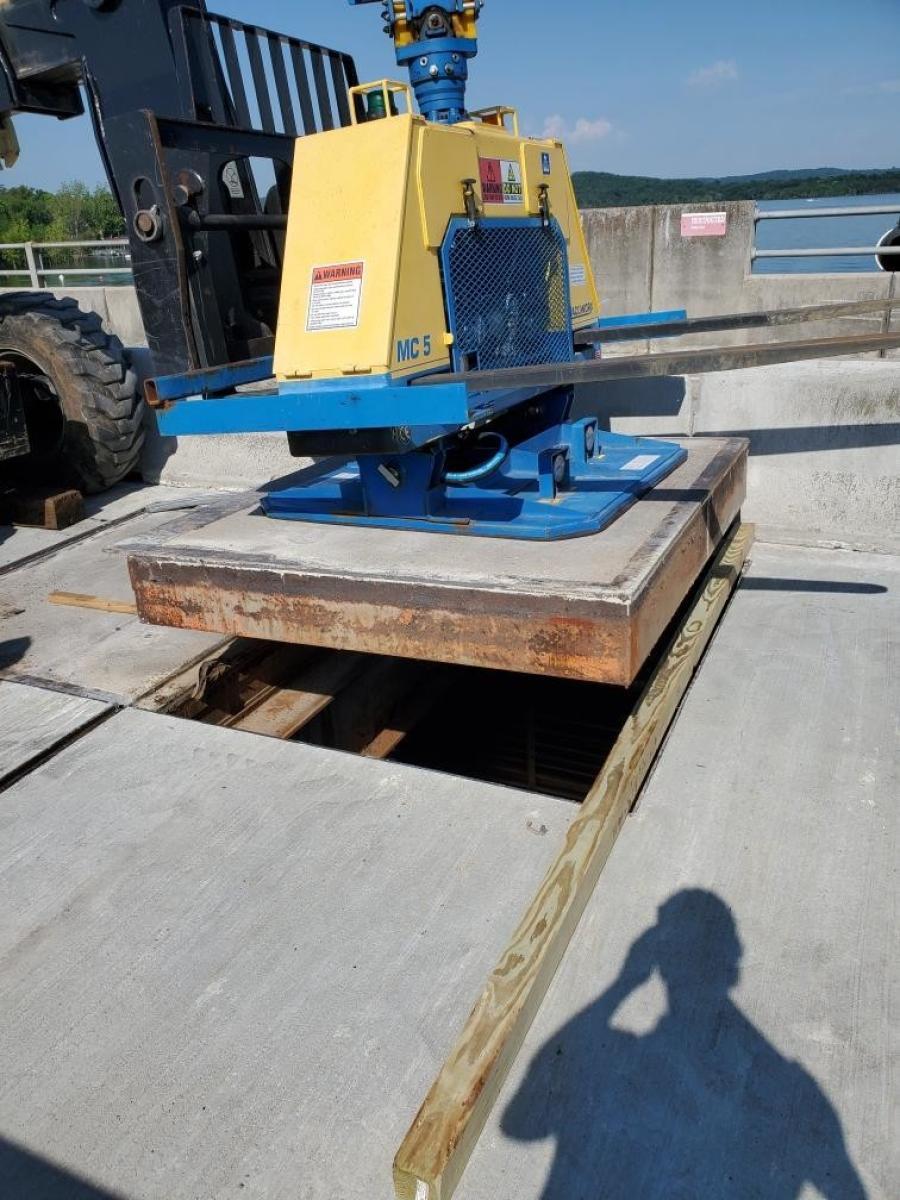 At Table Rock Lake near Branson, Mo., Mobley’s work crews were assigned the task of extending the lifespan of the 540-ft.-long bridge by hydro blasting and installing a Latex Modified Concrete Overlay, raising bridge elevation by 1 in.

Concerns surrounding the reduction of noise and creation of fewer dust particles on construction sites are shaking up techniques on which civil contractors have historically relied to break or handle concrete during road and bridge projects.

At Table Rock Lake near Branson, Mo., Mobley's work crews were assigned the task of extending the lifespan of the 540-ft.-long bridge by hydro blasting and installing a Latex Modified Concrete Overlay, raising bridge elevation by 1 in.

For its material-handling solution, the contractor turned to Tulsa-based Vacuworx and rental of an MC 5 Series vacuum lifting system. The objective was to make it safer, easier, faster and less impactful to traffic flows — ultimately reducing the time scheduled for each hatch removal as each 7,500-lb. chunk had to be drawn out to expose the overlay and bridge deck underneath.

Mobley made use of vacuum lifting technology, coupling its rented equipment — Vacuworx lifter and a high capacity JLG telehandler — to both remove and lift the hatches, then hold them in place as they were individually refurbished prior to being lowered back and reinstalled. Ken French, vice president of Mobley, said the Vacuworx MC 5 Series aided specifically in that phase of work.

Traditionally, Mobley's method of handling the hatches would have been to break the concrete, or saw cut it prior to attaching four pad eyes, four shackles and four cables — rigging the system with a telehandler to pull each slab. But a tendency in recent years to shy away from heavy-duty shovels, French said, has helped usher better technologies and more contemporary innovations to the forefront of civil construction. 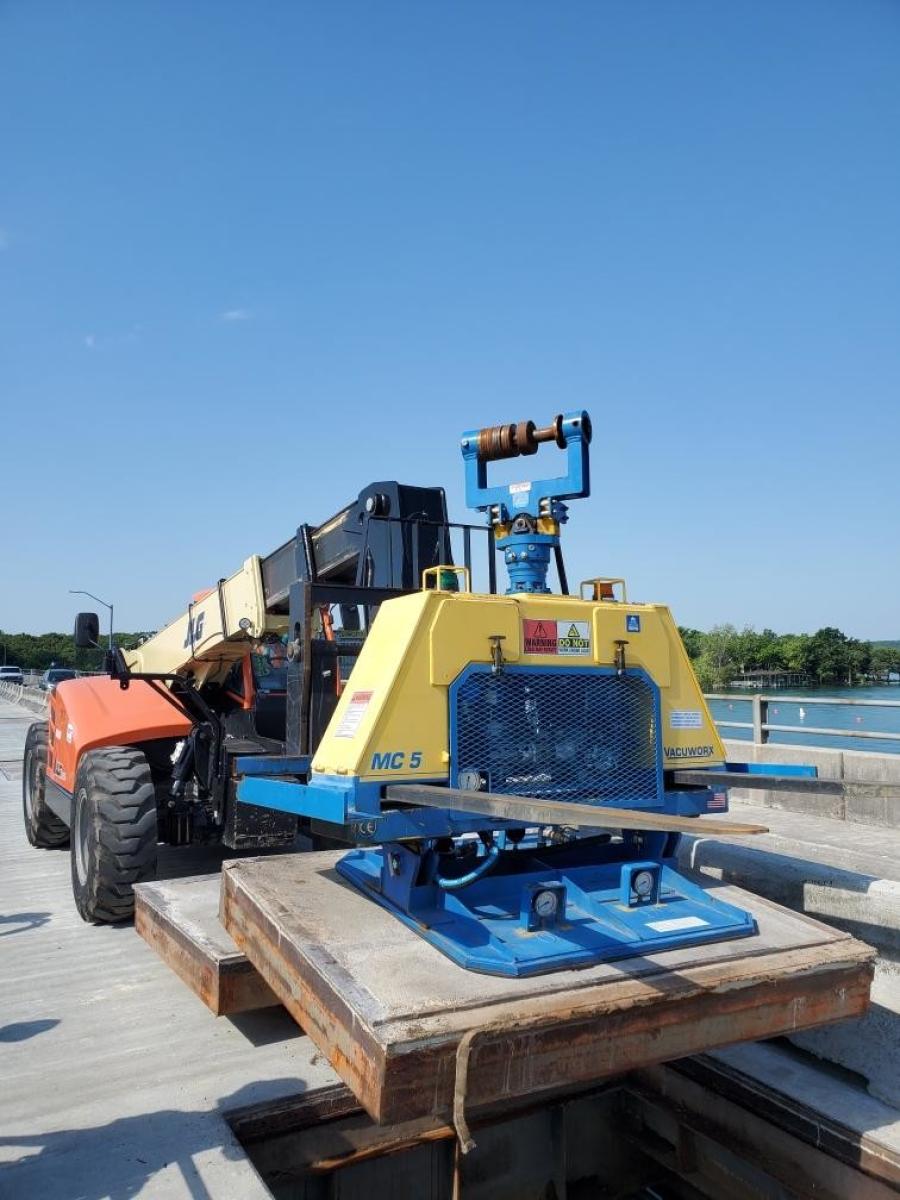 From a safety and environmental perspective, hydraulic breakers, chippers and jackhammers tend to produce a great deal of commotion, threating to push boundaries of regulated standards for emissions of noise and dust — even stir up concrete debris that can fly in adjacent lanes of traffic.

Reliance on hearing protectors or dust collection systems working with respirators, among other personal protection equipment, may also be necessary to help ensure workers are safe both "at the ear" and from potentially dangerous crystalline silica particles.

Impact noises tend to be more detrimental to hearing than continuous noise, according to Occupational Health and Safety Administration technical data, drawing attention to the majority of 500,000 workers who are exposed to hazardous noise levels, as well as impulsive and impact noise sources on work sites.

Overcoming noise and vibration restrictions in relation to certain equipment may also depend on specialized controls, including mufflers and silencers, especially in urban areas where background or impact noises may be less tolerable and decibel levels must be kept below certain maximums at neighboring property or boundary lines.

Today, French asserted, modern contractors in even greater numbers are opting instead for less obtrusive methods of concrete removal.

"Every contractor or crew has mini-excavators now," he said. "Nobody wants to run a shovel anymore. No unnecessary manual labor. If it has controls, an operator can run it. It is the same premise as a 90-pound jackhammer versus a mini-excavator with a hydraulic hoe-ram."

Modified engineering or administrative controls are commonly used as methods to lower noise levels on construction worksites and, according to the Laborer's Health and Safety Fund of North America, an investment in new equipment or quieter processes could also generate sought-after returns.

French said he first heard about vacuum lifting as a handling solution via a trade magazine article or on the Web. At the time French came across Vacuworx, Mobley was in search of a lifting alternative that was both safe and effective — with no loss of momentum or speed.

"Each hatch had four screws on top of the surface, just inside the perimeter," he said. "Naturally, those screws were gummed up, frozen up — they had been in there for 50 years. We would have only been able to get 10 percent [of the screws] out by drilling and using a screw extractor. And drilling them all out would have cost a fortune."

Engineered by Vacuworx to be lightweight — at the same time boasting a lift capacity of 11,000 lb. (5 tonnes) — MC 5 Series lifters are self-contained with their own power units. With remote operation and 360 degrees of hydraulic rotation allowing for the precise handling and placement of materials, they can be operated in conjunction with a host of compact equipment such as forklifts, backhoes, telehandlers, track-type loaders and mini-excavators.

MC 5 Series lifters are billed by the manufacturer as extremely versatile tools useful for handling semi-heavy loads of pipe, steel plate and concrete slab, among alternative materials, in confined spaces for utility projects, industrial or warehouse applications and job sites with smaller footprints. The MC Series was first offered among Vacuworx's expanding line of compact-ready equipment, following the launch in 2000 of its flagship RC Series with lift capacities ranging up to 50,000 lbs. (25 tonnes) and more.

A hydraulic version of the MC 5 released by Vacuworx — the MC 5H — has no fuel requirements as the lifter is powered by the hydraulic system of carrier equipment, causing even less noise and air pollution on construction sites with strict emissions guidelines. 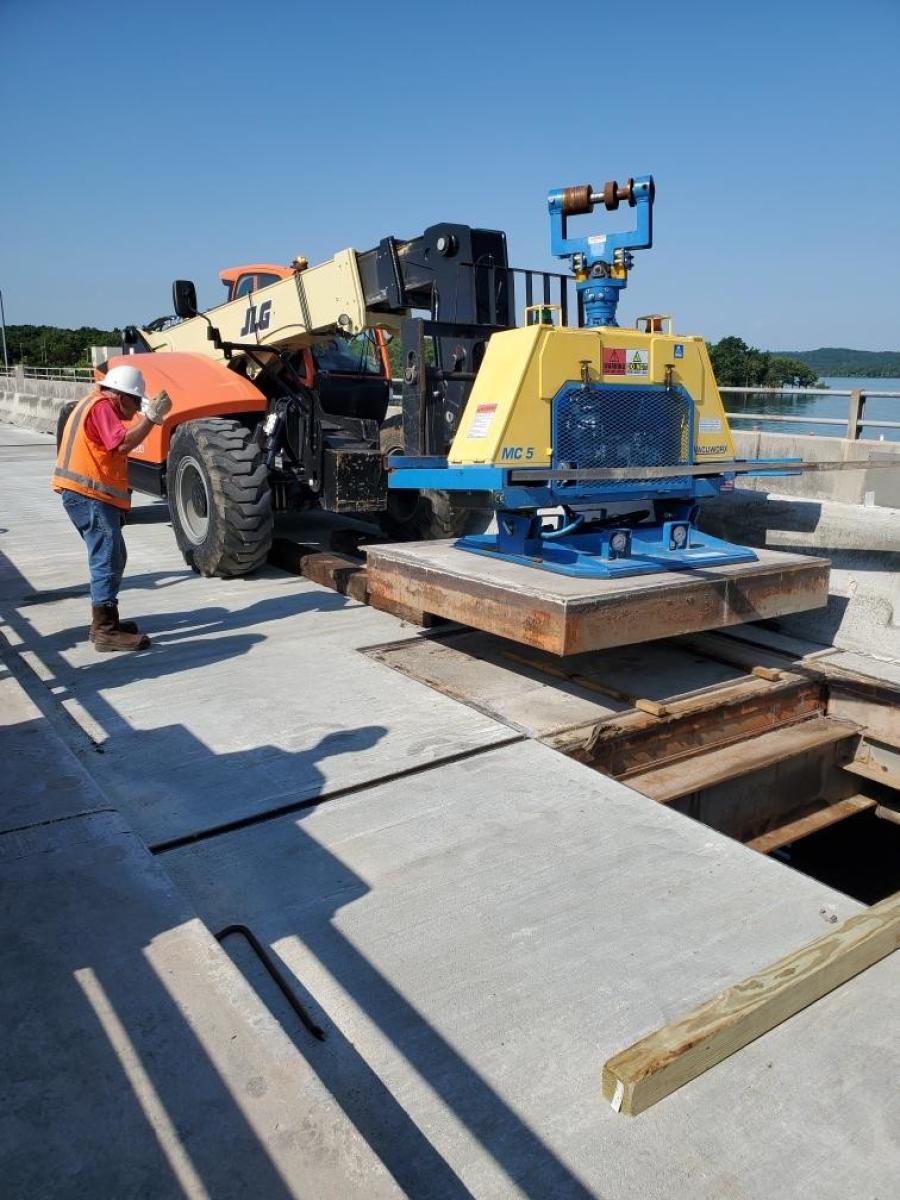 The lifting systems, designed to eliminate any requirements for hooks, straps, chains or other complex rigging mechanisms — including those that can cause damage to delicate pipe coatings or other costly materials — are designed to operate effectively in nearly all weather conditions.

Vacuum lifting, French noted, allowed for an automatic reduction in the level of dust and noise, without sacrificing efficiency. It also helped isolate workers and the surrounding community from potential would-be conditions that may have been caused by more traditional means of removing and recovering the hatches.

"It was a cost savings that convinced us to go with vacuum lifting; both labor and materials," French said. "Vacuworx sent out a technician the first time we used it; and we were on our own for a couple weeks after that. It took a day or day and a half for each hatch to be pulled, cleaned, reinstalled and resealed around the perimeter.

"Usually, a job like that may require two to four guys. With the vacuum lifter, you pick it up and you are done. We did it in 15 minutes per hatch; did not take long at all. We turned that project around and prevented probably 10 days of work."

Mobley specializes in heavy civil, industrial, and water and wastewater projects, including the construction of roadways, bridges and pipelines. With more than 50 employees, the company's track record with the U.S. Army Corp of Engineers alone includes the completion of numerous infrastructure projects over the last 49 years.

The company, founded in 1972, is today counted among the leading heavy civil construction contractors in Arkansas.

The contractor's portion of the bridge project at Table Rock Lake was completed in September 2021.

"We do a lot of unique work," French said. "It is natural for us to do projects that other people would not even touch. The Corp of Engineers likes new and innovative methods that enhance performance. We were excited for the opportunity to use [Vacuworx]. Everyone associated with the project was pleased with the outcome."