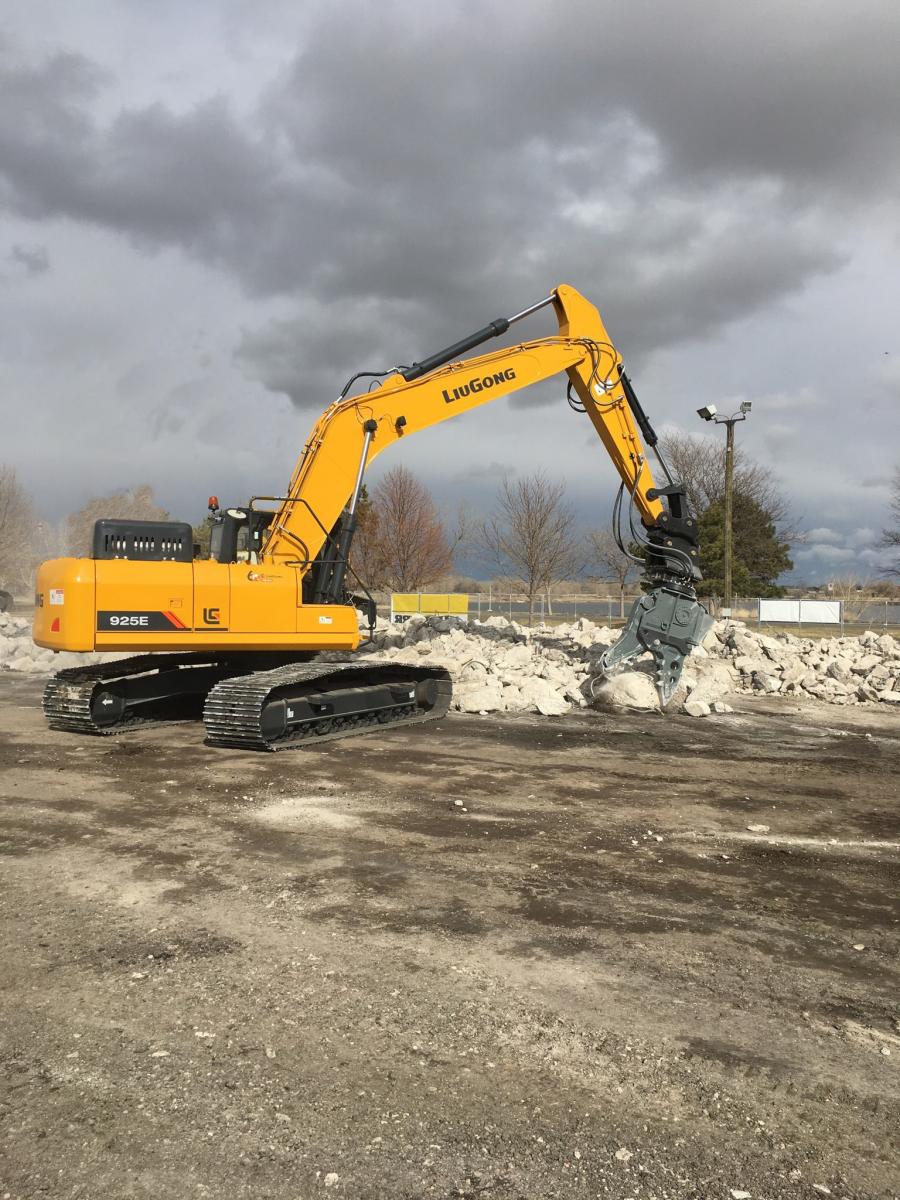 The Kinshofer MQP-30-Y Multi-Quick processor and LiuGong NA 925E excavator combination were featured at the “DEMOlition” event held by the National Demolition Association at its 2019 Demolition Rockies expo.

The Kinshofer MQP-30-Y Multi-Quick processor and LiuGong NA 925E excavator combination were featured at the "DEMOlition" event held by the National Demolition Association at its 2019 Demolition Rockies expo in March. The live demonstration gives prospective owners and their crews the chance to operate various types of equipment from different brands, comparing their performance and capability for themselves in a single day.

Alex Koss, U.S. Eastern region sales manager of LiuGong NA, said, "Demolition, scrap and recycling are highly competitive industries. So many things are outside the contractor's control. One variable that gives them greater control of their profit margin is their choice of equipment and tools."

That means choosing a reliable, productive excavator with low upfront cost, low operating cost and low total cost of ownership, Koss said. "The Kinshofer processing attachment packaged with a LiuGong excavator interests scrap and demo contractors right away. It's a potent, cost-competitive solution that lets them keep more of the money that they make."

LiuGong manages its price-point by listening to contractors carefully, Koss said, then focuses its North American product designs on giving contractors exactly what they need from their machines.

"That saves them money right away up front. They're not paying for a lot of things they don't need or want," he said.

Like all Kinshofer MultiQuick processors, the MQP-30-Y features Kinshofer's DemaLink jaw exchange system with six jaw options: combi, demolition, pulverizer, steel, tank and universal. The head was demoed with its pulverizer jaws but can be changed out in less than 10 minutes. Contractors can quickly switch from sheering through steel to demolishing reinforced concrete and then pulverizing it without slowing operations down. Primary and secondary demolition is performed right on site. All teeth and cutting blades can be changed out on site as well.

"We always like to work with LiuGong machines," said Dany Martin, territory sales manager Kinshofer North America. LiuGong excavators, he said, come straight from the factory with features especially beneficial for running attachments like the Kinshofer MQP-30 processor, which rotates through 360 degrees and requires varying delivery flows during operation. Features include a PTO-ready hydraulic system designed to deliver flow for tool rotation without taking flow from the main hydraulic pump, as well as LiuGong's Attachment Mode (ATT) control. ATT allows the operator to choose from, and even program, six selection modes right from the operator's station to match the engine's engine horsepower to the hydraulic pump requirements of different work conditions.

"For best attachment performance, the excavator's hydraulic system must deliver a consistent, high rate of flow no matter the work conditions to support the quick, reliable cycle times demanded by the Kinshofer MQP-30 processor (MQP)," Martin said. "Our patented DemaPower cylinder provides up to 20 percent more power than a standard cylinder and reduces cycle times to less than 5 seconds on the MQP and the DSP," Martin said. "We now use this technology on our MQP, DSP, DCC and new DXS shears."

Among other LiuGong advantages Martin pointed out was its lower fuel consumption, which reduces an owner's operating costs. All Kinshofer products are covered by its two-year warranty.

"And the LiuGong product line, of course, is covered by the best machine warranty in the industry," he said.

During the six-and-a-half-hour demo, 15 of the 682 DEMOlition participants got to operate the setup for their own onsite comparison. More than 1,000 yds. of concrete rubble had been brought to the fairground demo site and arranged in a 6-ft.-high line for machines to work on.

The Kinshofer MQP-30 and LiuGong 925E package at Demolition Rockies was sold and delivered to LiuGong dealer Groupe Gymdex in Montreal, Canada. Gymdex specializes in building scrap and demolition machines for their marketplace.

While the LiuGong name was new to many at the show, the company has been making construction equipment for more than 60 years. Its North American product lines feature major components that are familiar to the U.S. and Canadian market, such as the 925E unit's Cummins engine. LiuGong NA products are supported through its offices in Katy, Texas, and its family of highly valued dealers, a coast-to-coast LiuGong network providing full sales and product service close to its customers, no matter where they work.