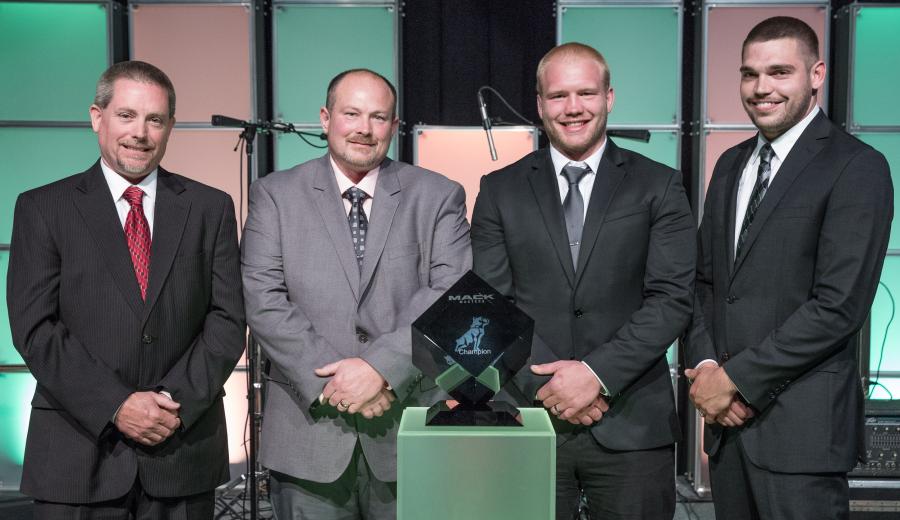 Mack Trucks crowned the “Slackers” (above) from CIT Trucks in Rockford, Illinois champions of the 2017 Mack Masters Competition final held at the Mack Customer Center in Allentown, Pennsylvania. From left to right are Jim Garner, Tim Stahl, TJ Stahl and Chris Zahara. The CIT Trucks team beat out eight others for the title during a comprehensive, hands-on final challenge designed to test the skills of Mack’s top service technicians.

The Mack Masters Competition, a biennial event designed to evaluate participants' knowledge of Mack's service systems and procedures, concluded with a new team earning the right to call themselves Mack Masters champions. After several rounds of competition, including a comprehensive final challenge, the “Slackers” from CIT Trucks in Rockford, Illinois were named champions of the second Mack Masters Competition. Team members include Jim Garner, Chris Zahara and father and son Tim Stahl and TJ Stahl.

“There's nothing like competition to make the best even better, especially in today's world of sophisticated trucks and components,” said Jonathan Randall, senior vice president, sales, for Mack Trucks North America. “All of the teams demonstrated their commitment to superior service for Mack customers, but the team from CIT Trucks took it to a higher level. Congratulations to Jim, Tim, TJ and Chris on this great accomplishment.”

The 2017 Mack Masters Competition kicked off this past January with early rounds of online challenges that tested competitors' knowledge of Mack's service systems and procedures. Nearly 2,000 individual participants on 457 teams from 16 countries took part, an increase of 80 percent compared to the inaugural Mack Masters. After competing in three rounds of online challenges, nine teams of finalists were selected, with one team representing each of Mack's regions: Central, Northeast, Southeast, Southwest and West for the U.S., plus Canada, Central America, Mexico and South America.

The final round of the competition featured nine hands-on stations designed to challenge each team with a specific service situation that had to be completed in just 30 minutes. Following the completion of a challenge, teams rotated to the next one until all nine were completed. Team results from all stations were tallied to determine the champion.

“These participants are the men and women who work tirelessly every day to keep our customers' trucks on the road,” Randall said. “Mack Masters not only shines the spotlight on their tremendous efforts, but also gives us a chance to hear from them on how we can increase uptime for our customers by improving our own service processes.”

Mack Trucks Academy coordinates the Mack Masters Competition as part of their responsibility for developing and implementing Mack service training and aftermarket support programs. The academy is accredited by the National Institute for Automotive Service Excellence (ASE) for Continuing Automotive Service Education (CASE).