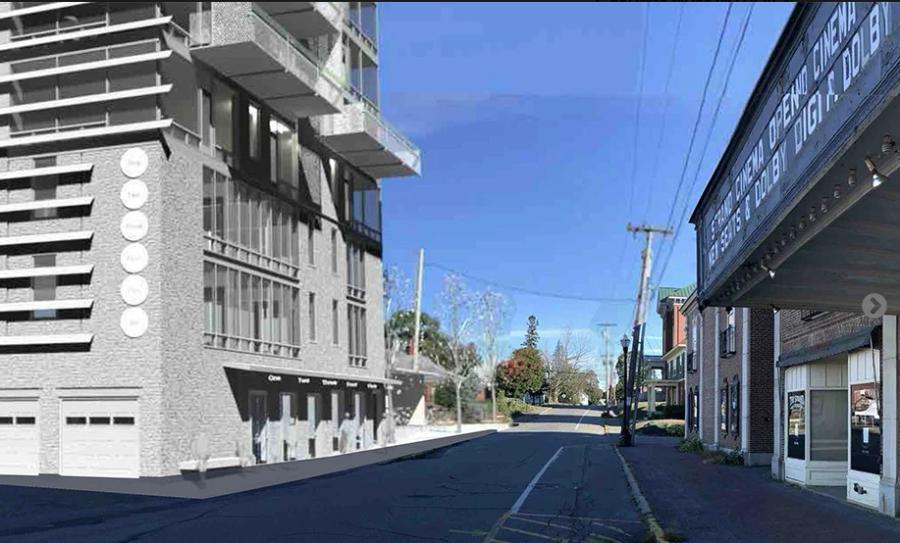 A rendering of the vision Maine Grains' Amber Lambke has for the downtown Skowhegan lot once occupied by the Kennebec Valley Inn with the Strand Cinema opposite. (Animate Inc. for Land & Furrow LLC rendering)

One business owner's unique, outside-the-box, thinking is driving a new business venture in downtown Skowhegan, Maine, that, in collaboration with other businesses, promises positive outcomes for the town and surrounding areas in the coming years.

The plan is to develop and build a property that will supply housing, a space for the farmers market in the winter and to invite entrepreneurs to try out their businesses in a new building next to the gristmill.

Land & Furrow — whose name refers to the grooves and high points on a mill stone — was created after Lambke recognized that the business ownership and operational models of the enterprise were still coming together.

"Amber took a chance on the grist mill and invested in Skowhegan several years ago, and now she's doing it again — which is amazing," said Kristina Cannon, executive director of Main Street Skowhegan.

"It's so exciting to think about what that vacant lot will be and what it will mean for the community in the coming years. We truly have a lot to be proud of here in Skowhegan."

The parking lot outside of the grist mill also has been home to the Skowhegan Farmers Market, which has been around for approximately 25 years. The quandary has always been where the market can operate during the winter months. For the last few seasons, it has been housed at Boynton's Greenhouse, just up the road on Route 201.

"[Boynton's Greenhouse] has served them okay, but we have a symbiotic relationship with a lot of the businesses here," Lambke said. "For years we've brainstormed with the town and others how we can solve this winter's farmers market location issue."

A few years ago, she said, they explored the idea of placing a roof over the parking lot to protect the vendors during the winter months.

"In the end, I'm glad we waited, and I think we can blend the desire for a large, open space for them in a new building next door."

The gristmill started in 2007, where the idea of a Maine Grain Alliance first evolved. Maine Grains Grist Mill also houses a radio station, yarn shop, a full sit-down restaurant and a creamery. The company has grown continuously since the formation of the Maine Grain Alliance in 2012 and has continued to thrive during the pandemic.

In mid-March, when the pandemic first hit and panic sent shoppers rushing to the grocery store to buy flour, employees at Maine Grains buckled down and worked to keep their products stocked and available to distributors. Their way of doing business, a collaborative model for rural areas, was praised as standing for a "radical vision: the return of true agricultural localism."

Sales at Maine Grains have skyrocketed during the pandemic and the business earned praise from The New York Times, which pointed out the company's way of doing business.

Lifting the Project Off the Ground

Lambke said that in the last year, their organization was the recipient of a grant from the Cummings Fund, which allowed them to explore the feasibility of a future building in the adjacent lot with all the necessary partners and to also hear an updated perspective on the growth plans of some of the food businesses in Skowhegan and what their space needs are.

"It's Maine Grain's growth, it is the farmers market's growth, it's the individual entrepreneurs' growth and making space for future entrepreneurs," Lambke said. "All the while considering the need for more housing in Skowhegan to house the workers that we're attracting to town with our new businesses."

Lambke is hopeful that with other big projects in surrounding areas, this key plot of land in the heart of Skowhegan's downtown can serve and tie together different attractions.

"With Main Street being focused on the Run of River project and with the mill being here, the farmers market, there is a chance to make this a beautiful corridor of economic and social activity between here and the Kennebec River," Lambke said. "We view this parking lot area, if framed by a new building next door, will really form a plaza that is a lovely place to gather and be outside."

In 2018, the Kennebec Valley Inn (KVI), which had stood for 117 years on Court Street, was demolished after being purchased for $73,000 by the Skowhegan Economic Development Corp. At the time of the purchase, Hewett said that the group hoped to create a new, multi-use building on the site.

"The KVI was a big, old structure that was moved by oxen from where the municipal building is to this location," Hewett said. "Back in the early 1900s, in its heyday, the building was beautiful."

Over the years, however, the building deteriorated. The three-story structure had small rooms that were hard to renovate because of the varying levels of asbestos throughout the building. With the problems that existed, and risks associated with buying the property, many private buyers turned away, Hewett said.

After a lot of discussion within SEDC, the decision was made to buy the building, abate it, and then tear it down. At that time, Hewett said, discussions with Lambke had taken place, ideas had been shared, but there was no plan in place.

"We were able to put together a proposal with her that worked for us and her, and we believe that it's going to have a major impact on the town of Skowhegan," Hewett said. "It's going to impact every business in Skowhegan one way or another." 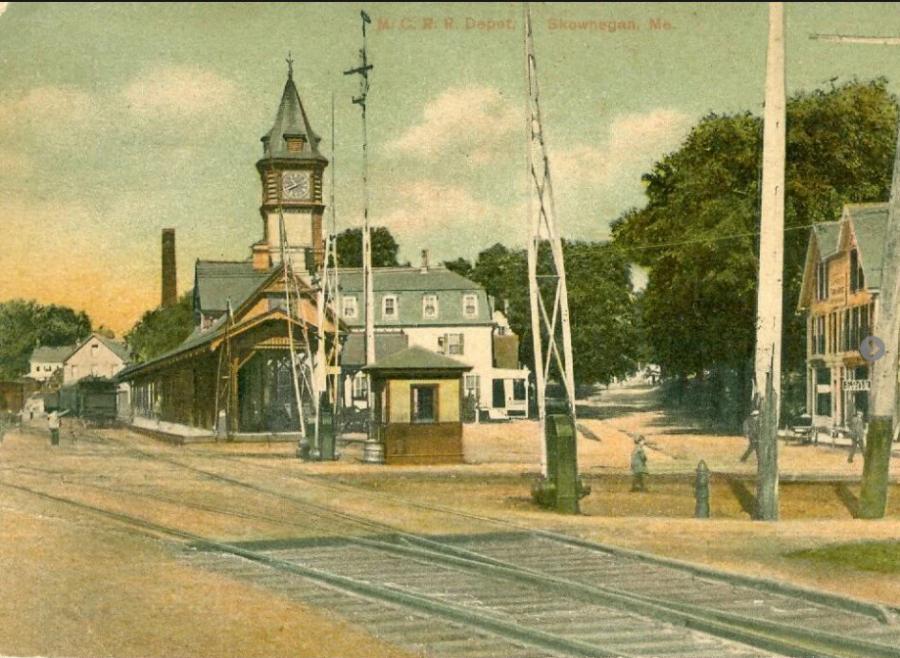 Lambke said that the goal is to begin construction within the next four to five years.

"The solution that SEDC came up with us was to allow us to enter into a purchase and sale agreement for the land with the stipulation that we have a year to achieve and approve of a construction plan with the town," she said. "Then we have up to four years after that to get a final building built, so while we hope to execute that project sooner, we recognize that it may take time to find the right partners and to build a model that is going to be successful in Skowhegan."

What is unique about this project is the hybrid model that is being explored. This will allow occupants to come into the building having an equity stake in the project with an upfront cost to get into the building and potentially a monthly due to the building. When they choose to leave, they can sell their equity space. This model, Lambke said, makes construction in rural areas possible.

"I think Amber's drive really comes from her thinking outside of the box," Hewett said. "She doesn't use the normal practice on new projects, and I think that's worked extremely well for her."

Housing and childcare have both been considered essential elements to include in the new construction. To attract new workers to town, housing needs to be available to them.

"Childcare is an issue for many of our employees, and we envision the possibility of childcare services that can happen in the building next door," Lambke said. "At any given time, I have a handful of employees that are looking for houses to buy or rent and the housing stock is just short."

Despite the pandemic, Lambke is hopeful that this project will only bring positive outcomes to the town.

"The pandemic will end, and life will go on, and it's not a time to stop thinking about where we need to be heading," Lambke said.