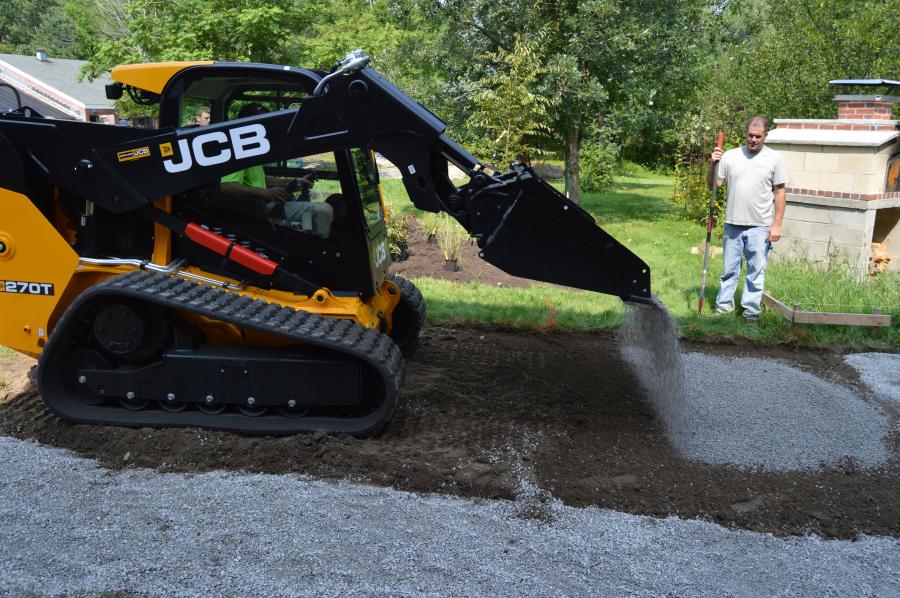 Ryan Russell of Land Plans Inc., a landscape architect, stated that the JCB 270T compact track loader was a versatile tool for the group to use.

A volunteer work project through the Maine Landscape and Nursery Association (MELNA) took place in August at Portland Arts and Technology High School (PATHS). The goal was to add improvements to some of the school's programs, including those involving culinary and landscaping skills.

The volunteer day, which was held on Aug. 17, came about because of the efforts of Kathy Tarpo, who is an instructor in the landscapes and gardens program at the school.

“I hatched this plan,” she said, adding that the school includes approximately 400 students and is a regional Career Technical Education (CTE) center for Cumberland County.

“About 20 high schools send their students here,” she said. “We have a morning program and an afternoon program, and students are with us for about 2 ½ hours every day, and then they're at their sending schools the other portion of the day. They come here and visit and it's a choice, so it would be an elective credit for their schools.”

Classes include a mechanical cluster; a marine systems program; precision manufacturing; a construction cluster that includes woodworking, masonry, plumbing and heating; a service cluster that includes landscapes and gardens; early childhood occupations; heath science occupations; and culinary and food service. PATHS is different from some other CTEs in that it also includes an arts cluster, a music program that focuses on performing music, a dance program and commercial art. 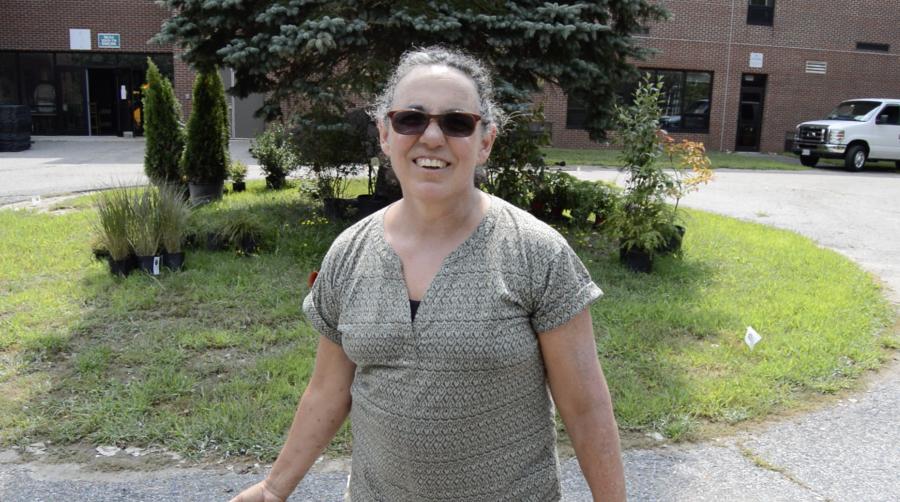 “I started working here in my program five years ago, and this land was underutilized,” Tarpo said. “I've kind of shifted the program to a little bit more sustainable agriculture and landscaping. We're redoing the landscape so it's a lot more usable and we're incorporating native plants for the wildlife. We are putting an emphasis on farm to table so we can have some culinary events here.”

She noted that the project involves a new landscape, but also includes plans for building a sugar shack since the students harvest sap from the maple trees and make maple syrup. In addition, there is a pizza oven that students in the masonry program made.

“We can make pizzas out there and actually serve meals,” she said. “We have a harvest celebration — my program does it for the whole school. I'd like it to be more of a place where some nice events could happen.”

Tarpo explained that she is involved with MELNA and knew that they did the workday event.

“I got a school ground greening grant, I think two years ago, and that grant was to do the design for this project,” she explained. “At that time, I reached out to MELNA and asked if this is a type of project that they would see doing as part of their volunteer workday in the future. This year, they chose us, and I feel like we kind of won the lottery.”

Tarpo explained that schools like PATHS are important because there are not enough people to fill vocational-type construction job needs.

Tarpo explained that students in her summer program were involved with clearing and cleaning up to prepare for the work day. They also will be involved in planting, mulching and adding to the landscape.

She noted that the outdoor cooking area will have a post and beam structure, and she also wants to add a green roof to it to showcase that technology.

“I thought it would be perfect for a permeable patio surface to show people a new material that would be more environmentally friendly,” she said.

Tarpo explained that she went to college for biology, then worked in biotech and then in a wholesale greenhouse for almost 10 years. She also took a few classes and wound up teaching for a number of years.

“When I saw this job come available, I knew that was how I could merge my two crazy careers into one good one,” she said.

Tarpo is excited to add more variety of plant materials for teaching purposes.

“For example, I've always taught about evergreen plants and I've never had a hemlock,” she said. “Hemlocks aren't widely planted now, but hemlock is an important forestry in Maine so I feel that my kids should know what a hemlock looks like. I teach them basic vocabulary, basic plant i.d., how to work together. They're hands-on learners; they like moving mulch and materials, and it kind of activates their brain for the rest of the school day — getting them up and moving, and it develops confidence working in a garden. The greenhouse is pretty therapeutic, so I tend to get kids who might be a little anxious and introverted, and they come out of their shells in this program.”

Mark Hannibal, who teaches culinary arts and is in his third year at PATHS, was on hand during the workday to help support Tarpo in thanks for her work in getting the grant for the project.

“We got that nice pizza oven, and she's putting in an herb garden for us, and a bunch of plantings,” he said. “(It will be) a peaceful place in the back of the school that also has a function for learning and teaching opportunities. We can take the students out and show them what the herbs look like while they're growing. It's really a pretty valuable educational tool. They maintain the grounds here, so it's hands-on learning. The masonry program built the oven and the welding program built some of the sculptures that are around in the garden. We're trying to get the whole school involved so the kids see the plan and the actual implementation of the plan.”

Dylan Knight, who is the owner of Knight Property Services, volunteered his services for the workday. His company handles landscape renovation and mostly does landscape maintenance for commercial properties in the greater Portland area. He also is a member of MELNA. 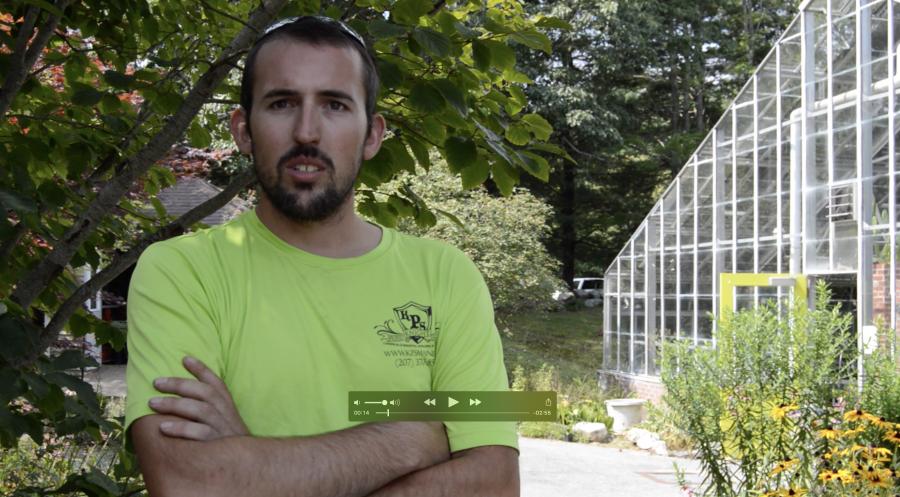 He spoke about operating the JCB 270T, noting that it was “pretty responsive” and “has plenty of power.” It was used for moving material, such as gravel and also for grading out the area.

Ryan Russell of Land Plans Inc., a landscape architect, serves on MELNA's executive committee. The company does all facets of landscape design in the greater Portland area.

“Every year MELNA takes on a volunteer project,” he said. “I helped organize everything — to get a lot of the equipment here, and materials. Now I'm following through with getting my hands dirty.”

He stated that the compact track loader was a versatile tool for the group to use.

“It's being used to help us set steps and move material around different parts of the property,” he said. “It's doing everything we need it to do. I had a conversation about some of its features. It seems like a very handy tool to have.”

Al Lappin Jr., who is the current MELNA president, is co-owner of Al Lappin Company. The group does brand new installs of trees, shrubs, and lawns, mostly in southern Maine but also up to the New Hampshire border. He actually went to the school in the early 1980s.

“Today, we're doing a total renovation of an abandoned park,” he said. “Every year we look for a charity project. We never know what it's going to be. It could be setting some stairs or a total renovation. We never know what it's going to be from year to year. This year, Kathy [Tarpo] reached out to us and said if there's some stuff you guys can do for us that would be great. I just found out today that another member helping out here was a graduate, as well. We're working with students who are coming here. That's a feeder system for us.”

He noted that MELNA is part of the main agriculture system in Maine, and the group's primary goal is to work with people from Augusta working on certain bills and legislations.

“We go around the state promoting our business and promoting buying local,” he said. “We have a program called Plant Something, which is kind of across the country now in most states. Our program — with all our members really working hard — is leaps and bounds above what almost all of the other states have.”

He encourages people to join the group for networking purposes and to help fight certain laws or bills.

“To have credibility, you've got to have members,” he said. “There aren't a lot of groups that have anything to do with the hardscapers or the general maintenance guys — the mowing and plowing and that sort of thing. This organization is fantastic with people like that to get in and get the names known. If you go to the towns or the state level to fight certain bills — it's different if you show up with three people or two or three hundred members.” 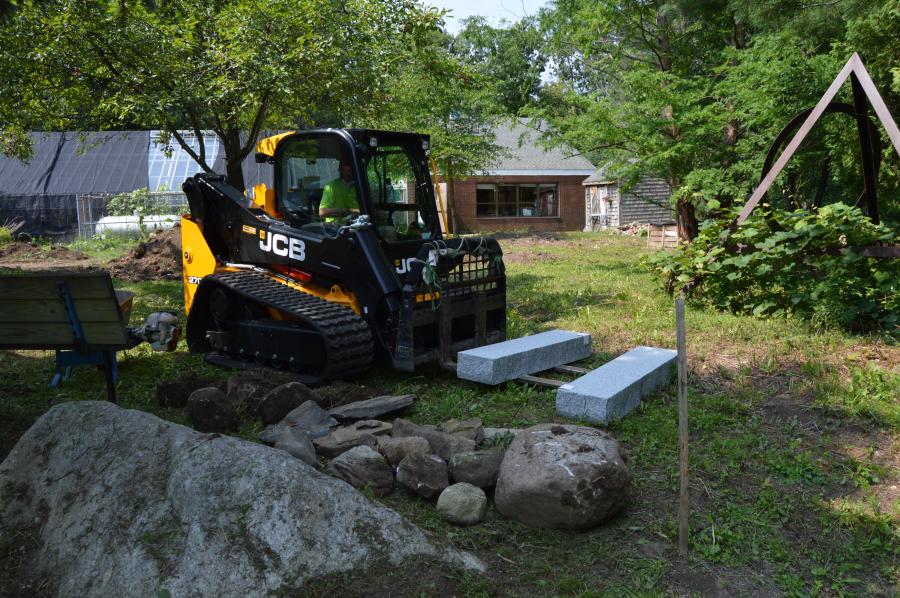