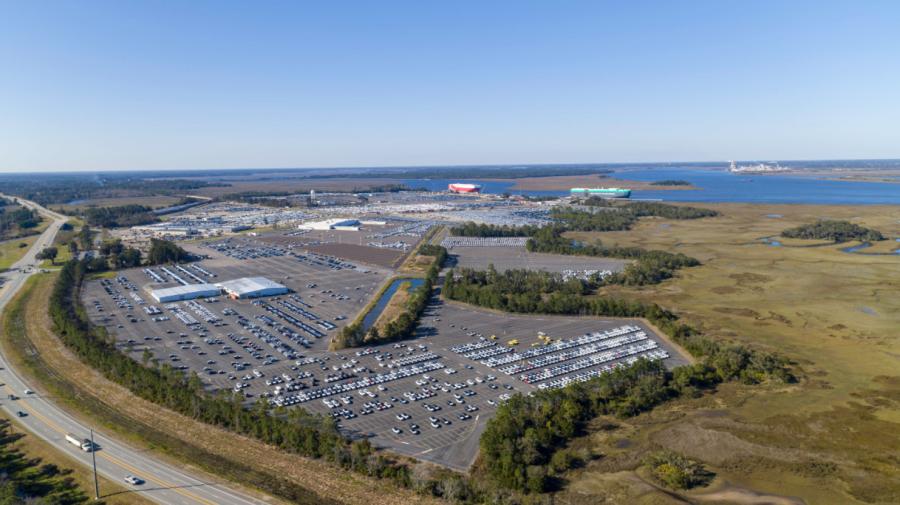 The Georgia Ports Authority plans upgrades to the Port of Brunswick including a fourth berth at Colonel’s Island Terminal, 85 additional acres for auto processing and 360,000 sq. ft. of new warehousing. (Georgia Ports photo)

The Georgia Ports Authority (GPA) unveiled a $150 million plan to grow capacity at the Port of Brunswick to benefit both the state's flagship auto port and breakbulk terminal for forest products.

Jamie McCurry, chief administrator of GPA, explained the effort to add to the port operations over the next several years at an announcement in March.

He said Georgia's deep-water ports in Savannah and Brunswick are dealing with a volume of traffic at speeds "unmatched in the Western Hemisphere."

The supply chain issues and backlog of ships waiting for cargo to be unloaded has been resolved at the Savannah port, the Brunswick News reported, and there are currently no ships waiting to be processed.

Further south, the nation's second busiest hub for roll on/roll off ships, behind only Baltimore, the Port of Brunswick moved 650,000 units of vehicles and heavy machinery in 2021, an increase of 10 percent over the previous year.

To accommodate the expected continuation in traffic volume, McCurry said a fourth berth will be added at the port's Colonel's Island, along with 360,000-sq.-ft. of new warehousing and 85 additional acres for auto processing.

The added auto storage on the south side of the island will increase the terminal's annual capacity from 1.2 million to 1.4 million vehicles. Colonel's Island has a total of 355 acres permitted for expansion.

The new berth, approved by the U.S. Army Corps of Engineers, is designed to include a concrete deck and system of mooring dolphins extending roll on/roll off berthing space from 3,335 to 4,630 ft.

GPA reported that bulk cargo handled by terminal operator Logistec in 2021 totaled 902,000 tons at the port's East River Terminal, while Mayor's Point managed 88,380 tons of forest products over the same 12 months. The latter terminal is starting to bounce back after a warehouse fire halted operations there last year, McCurry said, adding it has enjoyed a whopping 392 percent increase in business over the past seven months.

"We've been able to rebound and operate in a limited capacity," he told the Brunswick news source.

The newspaper reported also that there is a study to consider widening the channel on the approach of the Sidney Lanier Bridge and expanding the turning basin, although it provided no further details.

Construction on the Port of Brunswick expansion is expected to begin at the end of this year and finish in late 2023.

The News noted that the port is a major employer in the region, with one in every 10 jobs being related to the Brunswick harbor operation.

"Home to more than 20 automaker brands, Colonel's Island is poised to become the Southeast's premier auto port," GPA Chairman Joel Wooten said. "With more room to grow, better connections to inland markets, and an operation dedicated to roll-on/roll-off cargo, Colonel's Island is the region's busiest gateway for autos and machinery."

Griff Lynch, the port authority's executive director, added, "We're expanding berth and terminal capacity at both Colonel's Island and Mayor's Point so that we are ready to take on additional trade. The investments we are making will lay the groundwork for job growth and new opportunity in the Brunswick region."

According to GPA figures, Georgia's deep-water ports and inland barge terminals support more than 496,700 jobs throughout the state each year and contribute $29 billion in income, $122 billion in revenue and $3.4 billion in state and local taxes to the state's economy. The Port of Savannah handled 9.3 percent of total U.S. containerized cargo volume and 10.5 percent of all U.S. containerized exports in fiscal year 2020.