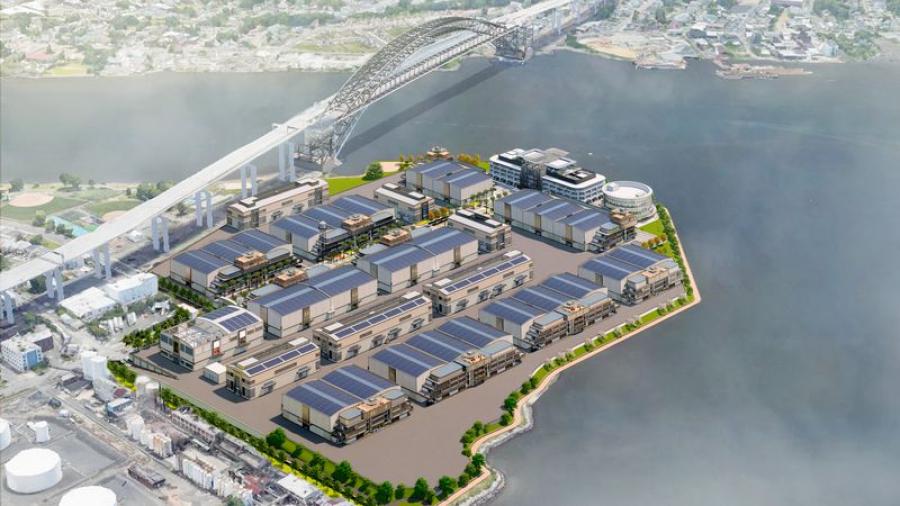 An aerial view of the proposed film and television studio at the former Texaco property in Bayonne. (Image courtesy of 1888 Studios LLC)

By 2025, a new major motion picture studio, likely to be the largest in New Jersey, will open on the former Texaco site in the Bergen Point neighborhood of Bayonne.

Before construction begins next year, the city held a town hall meeting Sept. 7 with municipal professionals, redevelopment representatives and residents in attendance at the auditorium at Bayonne High School.

In his opening remarks, Mayor James Davis, who grew up about four blocks away from the development site, noted that the area along Avenue A was a former industrial hub for more than 100 years.

Before Texaco closed its operations at the property in 1984, it, along with Best Foods and CasChem, once provided stable jobs for several generations of Bayonne residents, he said, before each one shut down.

"In my life, this is a transformation of the city, because of what I've seen go on there and where we're going now," Davis added.

Only in the last eight years under his administration have these sites been redeveloped, according to the Hudson Reporter, with Best Foods becoming an Amazon delivery station, and a part of CasChem slated to be a phased, mixed-use residential and commercial development.

‘Hollywood on the Kill van Kull'

With the redevelopment, Davis said the city was returning to its film industry roots. In 1907, brothers David and William Horsely, residents of Bayonne, opened Centaur Film Co., the second motion picture studio in the United States and New Jersey, in the city.

Before there were any motion picture studios in Hollywood, Centaur opened an office and studio at 900 Broadway, and is thought to have later opened film stages at 686-688 Avenue E. The movie-making company later merged with its California affiliate, Nestor Film Co., to form Universal Film Manufacturing in 1912, now better known as Universal Pictures.

Michael White, the project's architect with Gensler, a global architectural firm, said 1888 Studios is respective of film history, deriving its name from the year Thomas Edison filed a patent for the motion picture camera. In addition, a building on the site may possibly be known as "The Edison."

According to Davis, he never envisioned during his lifetime that Bayonne would have "world-class" facilities including a golf course, a cruise port and now a motion picture studio which could make the area "Hollywood on the Kill van Kull," the tidal strait separating Bayonne from Staten Island, N.Y.

Jim White, head of development for 1888 Studios, told those in attendance at the Bayonne meeting that vertical construction at the site will begin in the first quarter of 2023, with a goal of completing the project in the second quarter of 2025.

Robert Benecke, the financial consultant for Togus Urban Renewal LLC, the redeveloper of the site, noted that it is currently in the preparatory stage, with his company already having invested $60 million into remediating and grading the property, which he called "putting hard money into the dirt."

But that is just a fraction of the investment that Benecke's employer plans to put into the project, the Reporter noted, as Togus Urban Renewal is investing a total of $700 million in construction costs, plus an added $200 million for land costs and redevelopment fees. That equals almost a billion-dollar bet on the Bayonne project's success.

He added that the Bayonne site brings in $1.3 million in taxes each year, but when the film studio is operational, that tax revenue will be boosted to $7 million annually.

The production facilities at 1888 Studios will be home to between 2,000 and 3,000 permanent positions when completed, and he estimated that the building project itself will generate as many as 2,600 construction jobs.

White told the town hall meeting that work also is being done to clean the contaminated site to make it fit for a modern motion picture facility.

The local news source learned that workplaces within the studio complex will include mills, offices and sound stages.

In all, the 1888 Studios redevelopment will consist of 17 three-story buildings that match the nature of the surrounding neighborhood. Ten percent of the site, or about six acres, will be a public park between the studio and the Bayonne Bridge along the Kill van Kull. A link to nearby Dennis P. Collins Park also is likely, as well as a waterfront walkway constructed along the development's shore.

Additional upgrades to Avenue A, among other things, will bring the cost of public improvements to $50 million.

And with the threat of rising water levels due to climate change, Jim White said the contractor will raise the property's land by 17½ ft., and build a retaining wall.

The design of the studio itself includes an Art-Deco-themed grand entrance, emblazoned with the film studio's name and an accompanying water tower, both traditional elements found at motion picture lots, according to the Reporter. A nautical theme is also planned to be among the "high-quality" buildings constructed at the site, an homage to Bayonne's industrial maritime surroundings.

Bayonne To Get a Large New Taxpayer

Michael Hanley, the city's financial advisor from NW Financial Services, said there will be $200 million in payments-in-lieu-of-taxes (PILOT) agreement payments made to the city over 30 years, with $135 million of that going into the municipal budget. He added that 1888 Studios will become the largest non-government and non-healthcare taxpayer in Bayonne.

Davis predicted that the film studio development will be a transformative event for the city, adding that Bayonne has moved from "the brink of bankruptcy" to a "turnaround." The mayor said the new studio complex, and the forthcoming UPS logistics center at the former Military Ocean Terminal, were the latest signs of the city's turnaround.