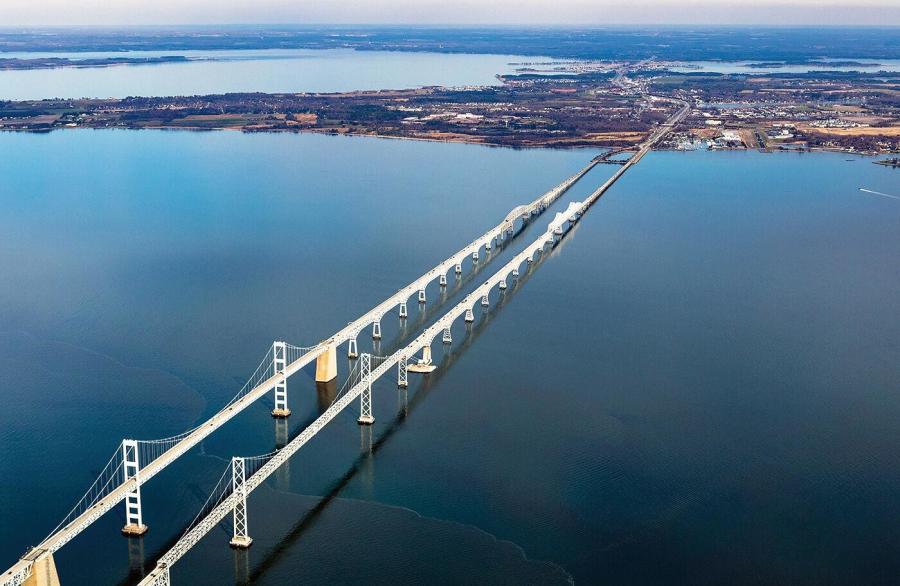 The Maryland Transportation Authority (MTA) has chosen a 2-mi.-wide corridor at the Chesapeake Bay Bridge as the best spot for an additional span, adding that the plan would relieve the most traffic congestion for weekend beachgoers and Eastern Shore commuters.

MTA released the five-and-a-half-year-long study April 21, after looking at 14 potential options for a new bridge.

In choosing "Corridor 7," the state agency said it would be able to tie a third span into U.S. Highway 50 on both sides of the bay. Including feeder roads, it would stretch 22 mi., from an area west of the Severn River Bridge in Anne Arundel County to the U.S. 50/U.S. 301 split in Queen Anne's County on the Eastern Shore.

A new bridge near the existing spans would be significantly shorter than neighboring alignments because the bay is narrower there, according WTOP News in Washington, D.C. A third span would run approximately 4 mi., roughly one-third of the length of the closest alternatives.

"Corridor 7 would require a much shorter crossing of the Chesapeake Bay compared to Corridors 6 and 8, which would potentially result in lower impacts to the open water of the bay and other major waterways," the study found. "A longer crossing would require greater impervious surfaces, more substantial construction, and a greater overall footprint of area impacted in the Chesapeake Bay and other major water bodies."

Adding a third span there also would alleviate a "substantially greater" amount of traffic and affect fewer neighborhoods than two locations considered to the north and south, the study found.

The Post noted that MTA believes the selected corridor has "substantial environmental resources," but more detailed analysis would be needed to figure out how an added crossing would affect them. As the shortest choice at a narrow point of the bay, the study noted, it "would potentially result in fewer environmental impacts to sensitive aquatic resources … such as open water, fish habitat and oysters."

Maryland's selection was outlined in the proposal's final environmental impact statement, which confirmed the conclusions of a draft study released last year. The Federal Highway Administration (FHA) approved the state's choice for the new span by issuing a "record of decision," which would be needed for federal construction funding.

However, the official selection does not mean the bridge will be expanded anytime soon, the Post reported.

MTA spokesperson John Sales told the newspaper that a more detailed analysis, expected to cost $28 million and take four to five years, will identify a specific alignment within the chosen corridor, but it has no funding.

Maryland also has not revealed how it would pay for design and construction, estimated to cost between $5.4 billion and $8.9 billion in 2020 dollars, depending on the amount of road widening or new approach lanes needed.

The study has raised questions about the best way to alleviate notorious traffic congestion across the Chesapeake Bay without increasing development pressure on Eastern Shore farmland or damaging environmentally fragile areas. Public officials representing communities along U.S. 50 on both sides of the bridge also have said a wider crossing would encourage more motorists to use it, ensnaring residents in more backups.

Jay Falstad, executive director of the Queen Anne's Conservation Association, said the MTA study is "fundamentally flawed" because it did not adequately explore other traffic-relief options short of an expansion, such as tolls to encourage crossing at off-peak times. He told the Post that MTA also did not consider the pandemic's long-term effects on travel.

"We don't quarrel with the idea that, if there's going to be another bridge crossing, it should be at the same location," Falstad explained. "But we don't believe the state has fully examined the no-build option or any other options that might reduce traffic."

He also cited an analysis by AKRF, a Hanover, Maryland environmental planning and engineering firm hired by his group, that found a new span would relieve traffic only "temporarily" because it would attract more motorists and spur more sprawl development. For example, the AKRF study said traffic on the bridge's second span increased by 37 percent within five years of opening in 1973.