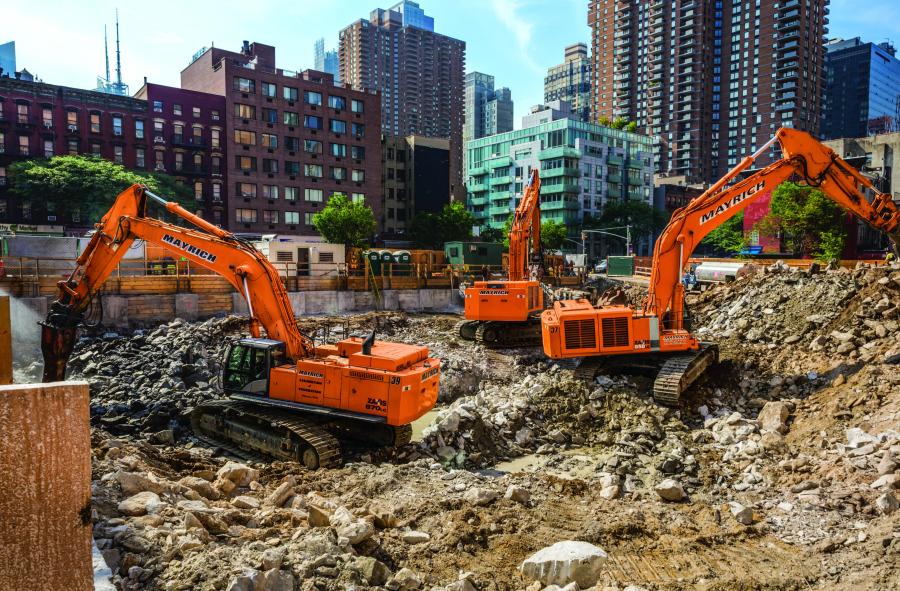 AOL Time Warner headquarters, Bloomberg headquarters, The Hearst Building, Trump World Tower. These New York City buildings, along with many others, all have something in common — solid foundations built by contractor Mayrich Construction and its fleet of Hitachi excavators.

Although Mayrich Construction was humbly established with “one dump truck and a dream” more than 70 years ago, it's now one of the largest excavation and foundation companies in New York City. The company is led by Joe Scott, who has maintained the position since the 1970s.

Headquartered in The Bronx, Mayrich Construction runs a fleet of nearly 30 Hitachi machines ranging from mini-excavators up to three ZX870LC-5 excavators. The orange machines conveniently match the company's colors.

“Hitachis are the smoothest machines in the business,” Scott said. “They're stronger than other machines, and you can buy any size. I've demonstrated every machine out there, and I won't buy anything else anymore.”

With 49 years of industry experience, Scott said his current Hitachi fleet is a far cry from what he ran in the old days.

“When I started a long time ago, I started on a Northwest shovel, running it for my family,” he said. “And today, I run one of the Hitachis and it's like running a car! It's beautiful and makes for an easy day.”

On each of Mayrich Construction's job sites, there's a lot more going on behind the green construction walls than meets the eye. It takes true professionals to manage the logistics of working in the city, and the company's crews aren't intimidated.

“Every job you do you have to hold the building; hold the streets; maintain utilities,” Scott said. “We have to go down below buildings 40 and 50 feet sometimes to make sure the buildings are stable. All our engineers are very involved in holding up the street. It's a fun thing. It's not like doing a superstructure where everything's the same every day.”

Don't be mistaken — Mayrich Construction isn't just digging around in dirt. Tough, New York bedrock anchors the skyline, and it has to be handled with skill. The company drills holes closely together in the foundation's rock perimeter. Then its excavators, armed with hammers, break the rock down before any digging starts. This excavation cuts down on the need for blasting and is critical to successful, tight city jobs. And Mayrich Construction only trusts Hitachi excavators to deliver.

“Ever since I've been running Hitachi, they stay together,” Scott said. “I'm a rock excavator, so you need machines that stay together. Everything else seems to fall apart.”

“In New York, we use the Hitachi excavators for everything,” Scott said. “We pour concrete, we set forms, we dig, we chop rock; we do everything with these machines. They totally run the job. It also helps that our dealer, JESCO, has good service. That makes a big difference.”

It seems Scott's love of Hitachi excavators has been passed down to his son, Joe Scott, Jr., who is also a key member of the Mayrich Construction team.

“You can do so much with Hitachi machines,” Joe Scott, Jr., said. “The undercarriage holds up better than others, and they're very versatile. The Hitachis are so smooth. If we've got Hitachis on the site, then we're happy!”

With current jobs spanning from mixed-use residential buildings to a theological seminary expansion, Mayrich Construction continues to make its mark on Manhattan and the surrounding boroughs with multiple generations working side-by-side.

“I love what I do,” Joe Scott Jr. said. “It's cool to drive in the city, point to a building and say, 'I did that.' It's that feeling of satisfaction getting a job done with a good crew. I followed my father into the business, and I always say, 'If I'm half as good as my dad, I'll be better than anyone else.'”

And the elder Scott couldn't be happier with his son by his side.

“I enjoy the business,” he said. “I've been doing this a long time, and my son's in the business with me now. You can't have anything better than having your son with you every day of your life.”

(This story was reprinted with permission from Hitachi Breakout Magazine, Fall 2017 issue.)