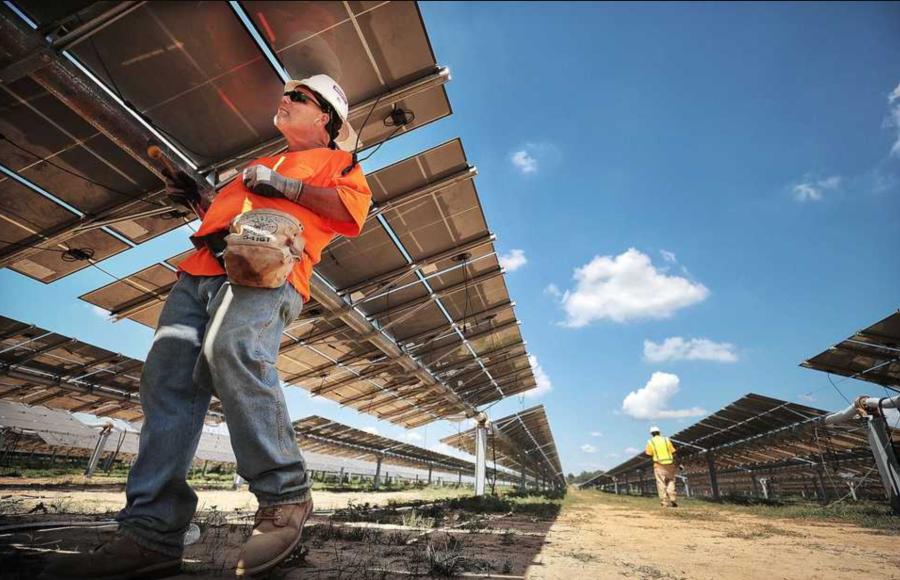 McCarthy is using Gayk machines for the Horizon Solar project in Pearsall. Workers drive the machine to the preloaded GPS coordinates, press the button and the machine drives the pile. The project began in August 2022 and is expected to be completed in a little more than one a year. (Photo courtesy of McCarthy)

McCarthy Building Companies, Renewable Energy and Storage group is doing that nationally and recently began construction of a new utility-scale solar facility on 1,600 acres near Pearsall, Texas, 55 mi. southwest of San Antonio. The region is well-suited to solar farming as it has below average rainfall, enjoys some 250 days per year of sunshine and has a city close enough to use the power that is generated.

The project calls for 85,000 steel piles to be driven 4-to-5 ft. deep with 6-to-8 ft. protruding from the ground to support the solar module. McCarthy will self-perform the installation of the steel piles, tracking system and above ground electrical work to energize more than 780,000 solar modules. McCarthy has subcontracted some of the work such as the building of an electrical substation on the property.

Leeward Renewable Energy (LRE) contracted with McCarthy to be the project's EPC (engineering, procurement and construction) contractor for the Horizon Solar project, which will be a 200-megawatt facility. The project will provide the renewable energy equivalent of powering 40,000 average Texas households. Horizon Solar will include components from leading American companies including modules from First Solar and smart solar trackers from NexTracker. 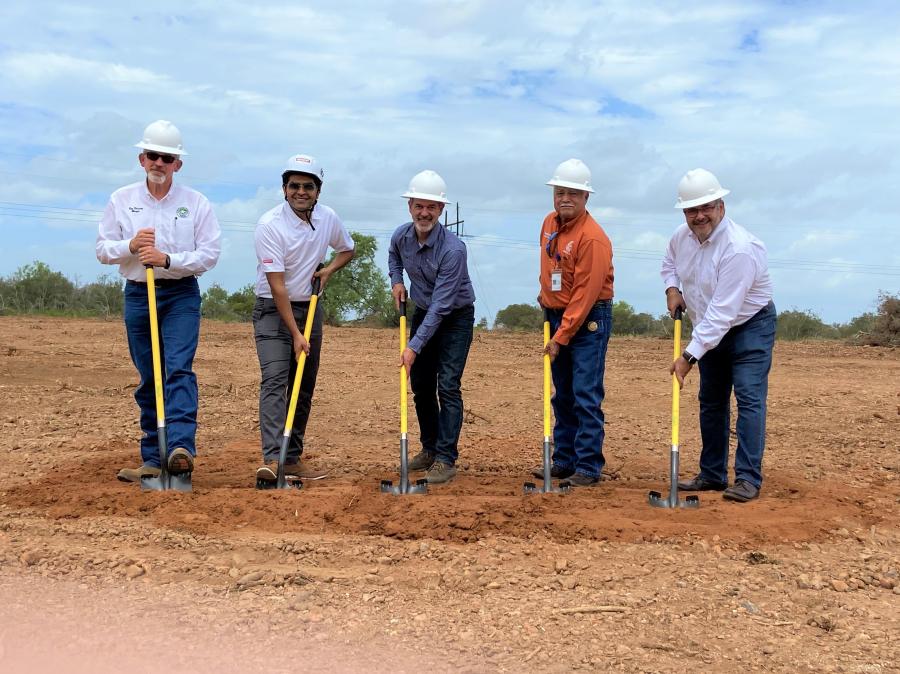 The project began in August 2022 and is expected to be completed in a little more than one a year. LRE will own and operate the facility.

Some might picture this project as just another job of fence pole digging across a piece of Texas prairie. Of course, the job is much more complicated than that.

One of the first orders of business was to prepare the land, which will then be revegetated with native plants. McCarthy elected to subcontract the ground clearing scope of work. The subcontractor utilized a gigantic chain, one used in the shipping industry, with each link weighing 75 lbs. and weighted capacity of over one million pounds to help with the process.

John Messerli is the project manager of McCarthy on the job. He oversaw the team as they graded the land, getting it ready for the pilings.

"The project requires us to build roads for the delivery trucks to navigate the property for the installations and be able to return later for regular maintenance," he said.

The rocky landscape is well suited for road building. Most road building projects require trucking loads of stone to a location for workers to create a solid surface able to bear the weight of heavy machinery. "The property has lots of rock similar to brown landscaping rock, so we can use that along with native materials on site to build the road," said Messerli. "With that solid base our team compacted it and no longer need asphalt."

The property formerly was cattle range with a pond for water. Although the area does not get much rain, the team will prepare the land to properly receive water so rain will not interfere with solar panel operation. Workers will create storm water retention ponds and seed the land so native grasses help hold the dirt in place when it rains.

With roads in place, workers will unload more than 25 semis of material each day, averaging two-to-five trucks of steel piles. Logistics are key in the project. 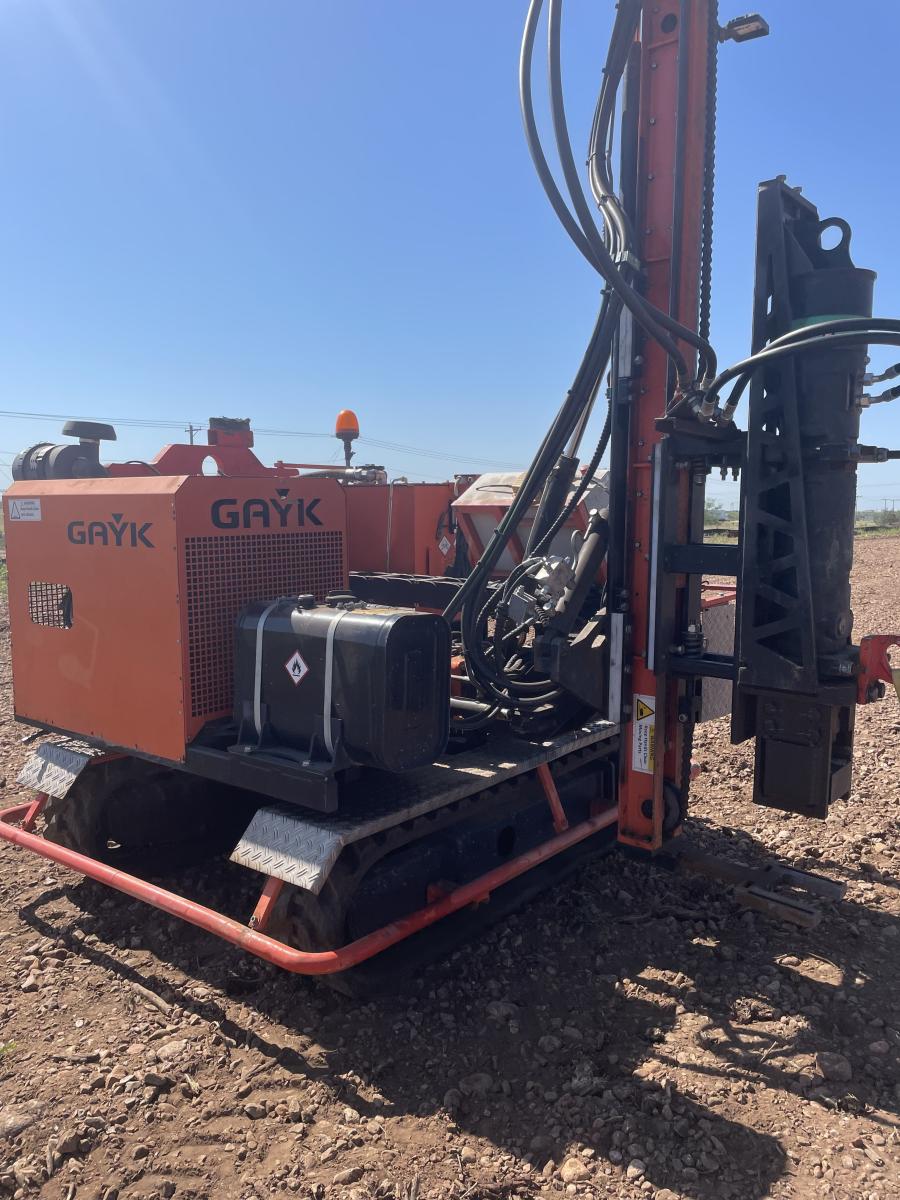 "It requires a lot of communication across the property to keep everyone working together," Messerli said. "We have teams unloading the trucks and staging material in the areas. Other teams line up the machines that drive the piles into the ground."

The steel piles are not one-size fits all. Different size piles are used because of uneven terrain and potential erosion.

McCarthy is using Gayk machines for pile driving. Workers drive the machine to the preloaded GPS coordinates, press the button and the Gayk drives the pile according to the predetermined elevation. It requires less than two minutes to drive each pile. In some areas, due to rocky sub surfaces, the Gayk machines may have difficulty achieving full embedment, which is considered refusal. In those instances, McCarthy has various plans to maintain the integrity of the pile. In some places the rock must be crushed so the piles will be accepted in the land.

The pilings will support a single-axis tracking system that will maximize solar capture by rotating to catch the morning sun in one position and the evening sunlight in another.

A key component of the project was the 300 workers needed, from entry-level to experienced. The job postings included laborer, operator, crew lead and electricians.

"We tried to emphasize hiring local workers and veterans," said Messerli. "We train 10-to-20 people at a time based on their experience. We make sure they understand the tools being used and safety procedures. We show them how to build the units piece by piece."

Lack of trained workers is a common challenge throughout the construction industry.

"Some people are not prepared for the rigors of working outdoors," he added. "But many others have handled the training well and understand what will be expected of them, and prefer to be outside working as opposed to in an office or building. Once a project completes, we work to retain those who were trained and take them to a new solar project where their skills are applied again and they have the opportunity to train others. For many, it's been a rewarding and appealing career path."

"With utility-scale solar construction jobs on the rise in Texas and around the country, we are continually working to help local skilled craft workers and veterans join our solar project teams and receive the training needed to develop rewarding careers in the growing renewable energy sector."

Since 2010, McCarthy's Renewable Energy and Storage group has built or is constructing nearly 80 utility-scale solar energy projects, delivering a combined capacity of more than 8.8 gigawatts of clean energy production and more than 775 megawatts of energy storage. CEG